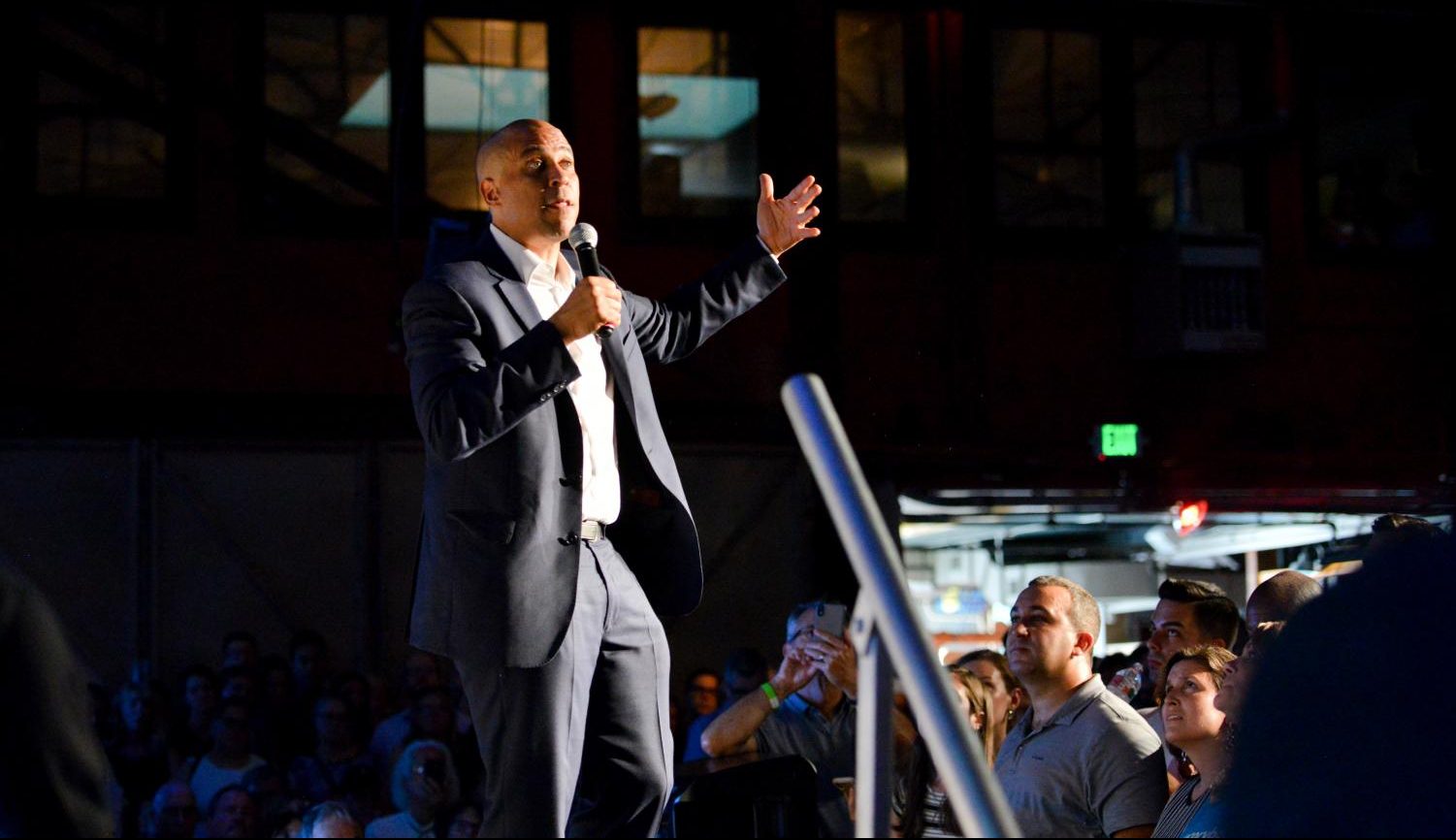 2020 Democratic primary candidate Sen. Cory Booker (D-NJ) addresses a crowd of over four hundred at his happy hour fundraiser yesterday. The fundraiser, hosted prior to the Democratic National Committee summer meetings this weekend, was held at the Folsom Street Foundry in San Francisco to popularize Booker’s campaign. (Kathy Fang)

2020 Democratic primary candidate Sen. Cory Booker (D-NJ) addresses a crowd of over four hundred at his happy hour fundraiser yesterday. The fundraiser, hosted prior to the Democratic National Committee summer meetings this weekend, was held at the Folsom Street Foundry in San Francisco to popularize Booker’s campaign.

Against two neon projections spelling out “CORY 2020” in bold letters, New Jersey Senator and 2020 Democratic presidential candidate Cory Booker led the crowd in an emphatic chant to conclude his speech from yesterday’s fundraiser.

“We will rise. We will rise,” he shouted into the microphone, his voice resounding in the cavernous Great Room of San Francisco’s Folsom Street Foundry, packed from wall to wall with a crowd of over 400 participants.

To promote his campaign, Booker hosted a happy hour event in the city prior to the Democratic National Committee’s summer meetings, which he attended today. He began his fundraiser with a speech emphasizing the importance of gun control policies and proceeded to elaborate on his heritage and vision, acknowledging the American Constitution along with recognizing leadership from citizens themselves.

“Will we, our generation, stand up with courage and defiance and love and say to the world, ‘I, too, dream, America; I dream of hope; I dream of love, a dream where every child can achieve their American dream,’” Booker said.

Booker currently polls at 2.2 percent on average, and he has qualified for the third series of Democratic presidential primary debates, to be held in early September by ABC News. 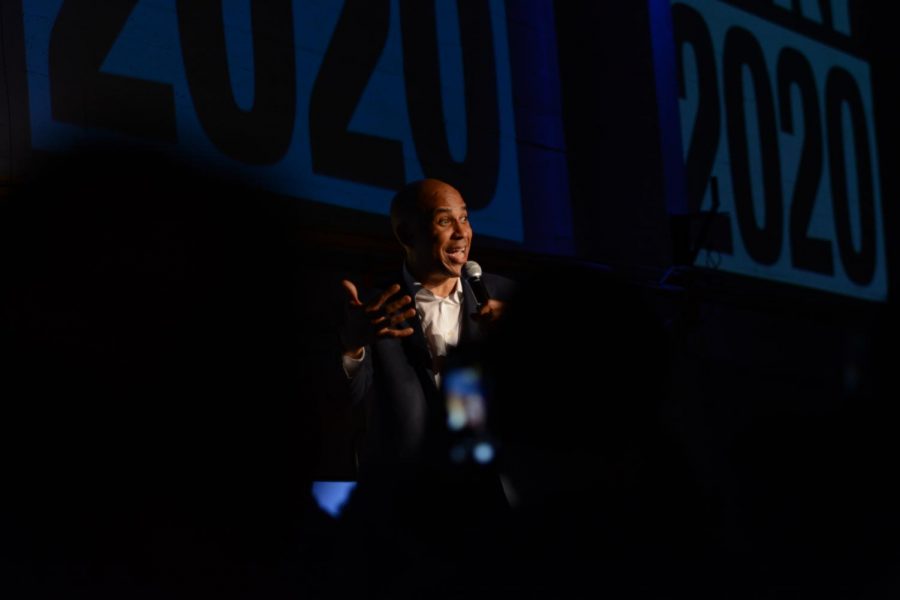 Gallery|6 Photos
Nicole Tian
Democratic presidential candidate and New Jersey junior senator Cory Booker speaks to a crowd at the Folsom Street Foundry. In his speech, Booker encouraged the audience to become involved in solving the issues at hand, including gun control and underpaid workers.

Doors opened to the fundraiser at 5:15, and Booker took the stage an hour later, accompanied by a member of his campaign and advocate Sydney Brown, an incoming freshman at the University of Southern California.

Brown, who introduced Booker, first heard about Booker six months ago, in her government class at Tamalpais High School, situated in Mill Valley. In her remarks, she described how she came to support Booker’s policies and how she became more involved in his campaign for the presidency, highlighting Booker’s passion and drive as two key characteristics that drew her support.

“The second that he announced he was running for president, I was like, ‘This is my candidate. I’m backing him, got my shirt, donated all my money out of my bank account,’” Brown said in an interview with Harker Aquila. “I met Cory Booker, gosh, like five-ish months ago at an event he did, and I got to talking to him, and we sort of have this instant connection with politics and charisma and things like that.”

After Brown ended her speech with a call to action, encouraging the audience to find and back a candidate who will implement the policies they support, Booker stepped into the spotlight. He began his speech by reminding the audience of the struggles throughout American history and follow suit in making this a “movement election.”

Throughout his speech, Booker drew attention to the persistence of social issues throughout American history, starting as early as the Constitutional Convention. Turning to history for both examples of precedents and guidance for future change, he referenced historical figures and events that pioneered reform in the face of systemic inequities, such as suffragist Susan B. Anthony or Buxton, Iowa, one of the nation’s earliest racially integrated towns. Booker even alluded to Biblical history and passages of scripture as a symbolic “civic gospel” for the American dream.

Notably, apart from his analysis of historical precedents, Booker emphasized that in his view, defeating President Donald Trump in the 2020 elections should not be “the goal” of the Democratic Party. Rather, Booker called for the audience to “have bigger aspirations” and work to solve the larger issues at hand, such as racism, anti-Semitism and other social injustices.

Booker also shared his personal experiences with the crowd, including being raised in a family that emphasized decency, respect and love as well as telling an anecdote about his grandfather, an assembly line worker who fought for workers’ rights.

Defining his vision as becoming a president for all citizens rather than appealing to a certain party, he then encouraged the crowd to face bigotry and hatred with activism, citing causes such as toxins in the water due to lead pipes in Flint, Michigan; underpaid workers; mental health care and gun control. Rather than depending on a single person to solve their problems, Booker urged his audience to advocate for their own causes in order to work together as the “saviors of this democracy.”

“I’m not running just because of policies and plans; I’m running because of the heart and guys of a country, the virtues of our nation, are in the balance,” Booker said. “This is an election that can define the soul of our country, and I’m running… in order to get big things done.”

As the former mayor of Newark and the current junior senator of New Jersey, Booker has shaped many of his policies around issues that are prevalent to his state and to his Newark community in particular, some of which are racial justice, housing reform, criminal justice reform and gun control. 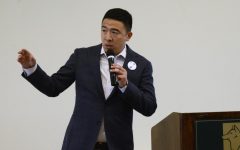 “Not left, not right, forward”: Presidential candidate Andrew Yang solicits the support of tech workers and Asian Americans in the Bay Area 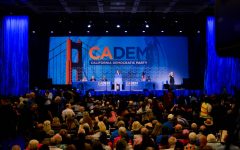 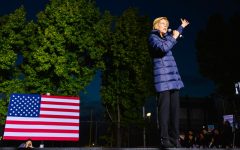 Towards the end of 2018, Booker played a key role in implementing criminal justice reform as an original co-sponsor of the bipartisan First Step Act, which was signed into law last December and aims to facilitate rehabilitation after incarceration.

Booker also prioritizes gun control as one of his primary issues, and in his campaign speeches, he has often spoken to his upbringing in a neighborhood impacted by gun violence. On May 6, 2019, Booker proposed a plan to regulate gun sales and curb gun violence by banning assault weapons, increasing oversight of gun manufacturers and sales, requiring firearms licenses and background checks to purchase guns and taking a number of other regulatory measures.

Though Booker’s campaign continues to trail in polls, currently standing in seventh, he has seen a few stand-out moments, particularly around the second Democratic debate, when Booker criticized former Vice President Joe Biden’s crime record. Many of his supporters, like Brown, are drawn to his personal story and legislative record.

Vanessa Valdivia, the Nevada Communications Director of Booker’s campaign, first became familiar with Booker’s leadership style while working in the Senate for the past two years.

“When he announced for President, I knew I wanted to work for him,” she said. “He has a unique story and experience, and I wanted to be a part of it.”

Booker, who described himself in his speech yesterday as someone who has “the body of a baby boomer but the spirit of Generation Z,” also aims to appeal to younger voters by encouraging generational change, which he views as vital to social progress.

“Young people have been at the center of all great movements for social change in this country, from the suffrage movement to the civil rights movement to even now, after Parkland, Generation Z is working so hard to change our country’s gun laws and make it safe, so I’m just hoping people all across the country recognize this is their moment,” Booker said in an interview with Harker Aquila. “We need their leadership.”