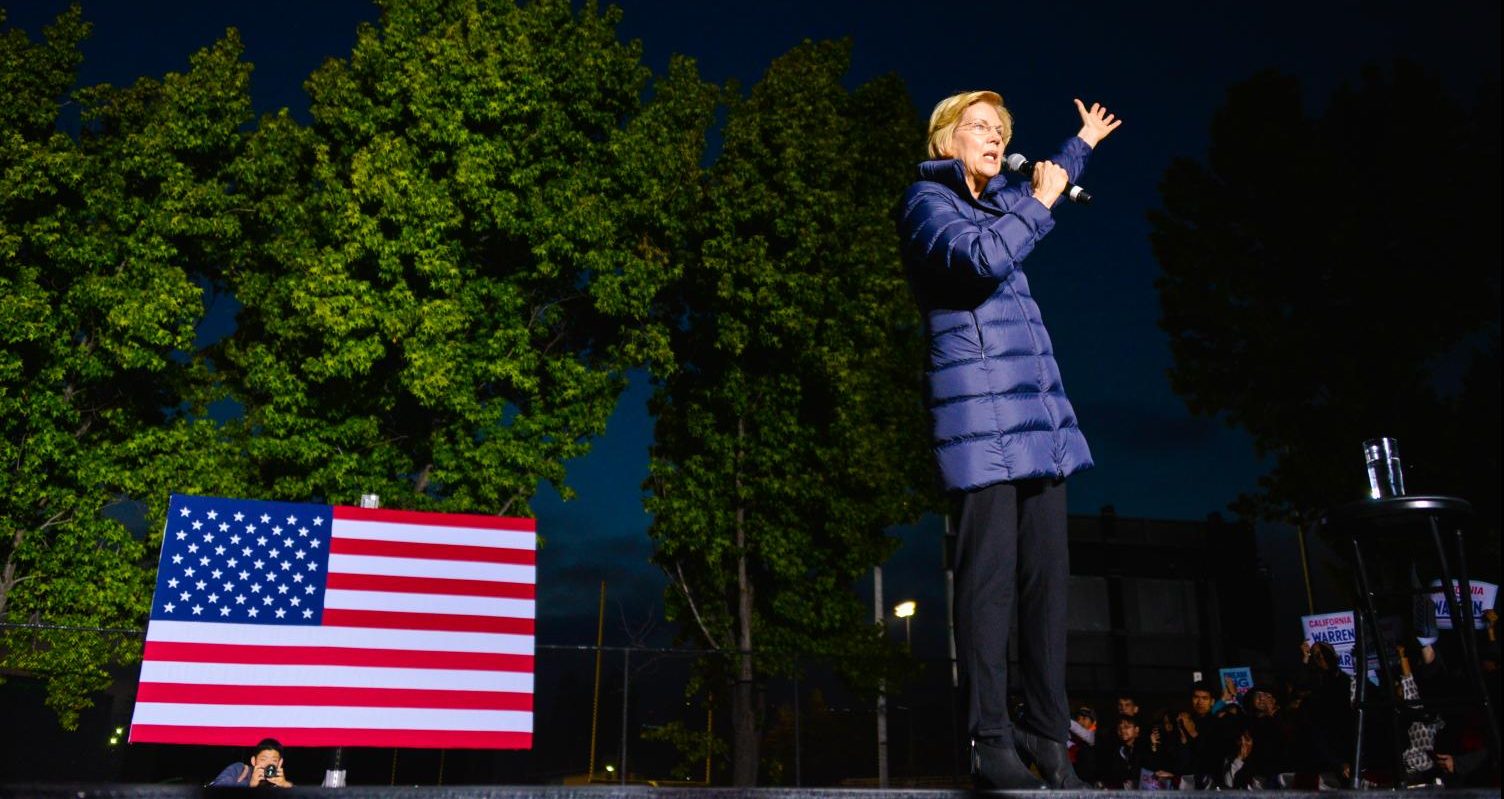 by Eric Fang and Kathy Fang

With the American flag behind her and a crowd of several thousand Bay Area voters and supporters before her, 2020 Democratic presidential candidate Sen. Elizabeth Warren (D-Mass.) stepped into the spotlight in the middle of a soccer field, both arms outstretched to welcome the cheers of her audience.

Before the audience had quieted its applause, Warren took the microphone and opened tonight’s town hall with her characteristic line, “I’m Elizabeth Warren, and I’m running for president because I’ve got a plan.”

Warren’s first Bay Area event was held in Oakland Friday evening as part of her campaign trail for the 2020 Democratic presidential nomination. In her speech, Warren emphasized rebuilding the middle class, ending corruption in the federal government and making childcare and quality education universally affordable—all of which have become central pillars of her campaign. 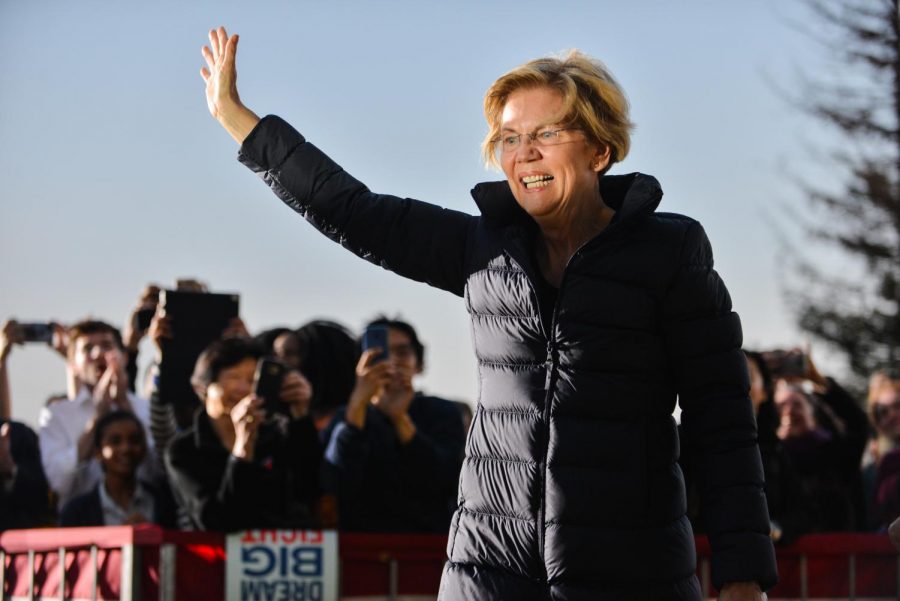 Gallery|8 Photos
Kathy Fang
As 2020 Democratic presidential candidate Sen. Elizabeth Warren prepares to take the stage, she waves to the cheering audience that is gathered in the soccer field of Laney College. Warren hosted a town hall for supporters and voters in Oakland.

The town hall began at 7:30 p.m. on the soccer field of Laney College and was free and open to the public. According to Warren, the turnout tonight was the biggest yet out of the 89 town halls Warren has held since announcing her candidacy in January this year.

After an introduction by former Oakland public school teacher Sonya Mehta, Warren opened her speech by talking about her family in Oklahoma. Warren’s family of six experienced poverty after her father suffered a heart attack during her childhood. In her speech, Warren connected her story to that of millions of Americans.

“It’s a story about millions of people all across this country, people who—no matter how scared they are, no matter how hard it is—they’ve reached down deep, they find what they have to find, and they take care of the people they love,” she said. “But it was only years after that I came to understand that that story is also a story about government.”

Warren then regaled the audience with the circuitous start to her career: After enrolling in college on a scholarship, she got married at a relatively young age, dropped out of college, got her first full-time job, enrolled in community college, worked as a special needs teacher until she was laid off during her pregnancy, graduated from law school, practiced law (“for 45 minutes,” she said) and eventually taught corporate and financial law at a law school.

Throughout this narrative, Warren stressed the theme of perseverance, which saved her family from the brink of financial collapse and brought her to run for the presidency this year. Warren especially highlighted her dream, which first took shape when she was a third grader, to become a teacher, connecting her early determination to teach to her current mission of educational reform.

“I really like the statement ‘She persisted’ [to describe Warren],” University of California at Berkeley student Ajuney Hora said. “She’s really, really trying to do her best, [and] it’s not really just for the candidacy, but it’s really for trying to make change. I think that really resonates.”

Warren’s story also called for greater governmental accountability to the needs of the middle and working classes. During Warren’s childhood, her mother’s minimum wage job allowed the family to pay the mortgage and stay out of poverty, something that a minimum wage salary could not do today.

Her message resonated with members of the audience, such as Salam Halie, an immigrant mother from Eritrea who was able to get a picture with Warren.

“To hear about and oftentimes experience all the racism in this nation is a really scary experience for me, especially since I am raising two young, African American boys,” Halie said. “When she spoke about people working hard but not receiving what they deserve, I thought that that really spoke the truth.”

In addition to instituting a minimum wage that can support middle class families, Warren’s plan for rebuilding the middle class includes universal childcare, cancellation of student debt and investing in housing, as well as eliminating the influence of wealthy corporations on the government.

“It’s the fundamental question of who government works for,” she said. “I guarantee that if there’s a decision to be made in Washington, that decision has been influenced by money. And that is corruption.”

To fund her reform policies, Warren proposed a two cent wealth tax, or a two percent tax on assets worth more than $50 million. According to Warren, those two cents per dollar could fund universal childcare from ages zero to five, universal pre-kindergarten and tuition-free colleges, as well as cancel student loan debt for 95% of the nation.

“Two cents. That’s all we’re asking for,” she said. “And just to be clear on this—99% of Americans last year paid 7.2% of your total wealth in taxes. The top paid 3.2%. I’m tired of freeloading millionaires.”

Audience member Samuel Bumen, who works for the California Unemployment Development Department, connected with Warren’s support of the 99 percent.

“I talk to the 99 percent all the time on the phone, so the points that Bernie Sanders is saying, the points Senator Warren is doing, those are really important to me,” he said. “They really hit home for me too. I still struggle, I grew up in Sonoma County, I just had a rent increase, so I think it is important for me to come out and see what these candidates are all about.”

Throughout her speech, Warren offered a series of reforms that aim to rework healthcare, voting protections, climate policy and education, building on her reputation as a pragmatic candidate who is never short on plans.

“She has a plan for everything,” event volunteer Christina Laurivsen said. “Her plans are detailed, she is intelligent, she is tough, she is a fighter she is willing to take on the big banks and the corporations and she is a feminist. She has everything that I want in a candidate.”

Warren ended her speech with a call to action, which was answered by enthusiastic cheers from the crowd.

Warren will attend the California Democratic Party convention in San Francisco this weekend, before speaking at events in Detroit and Lansing next Tuesday. 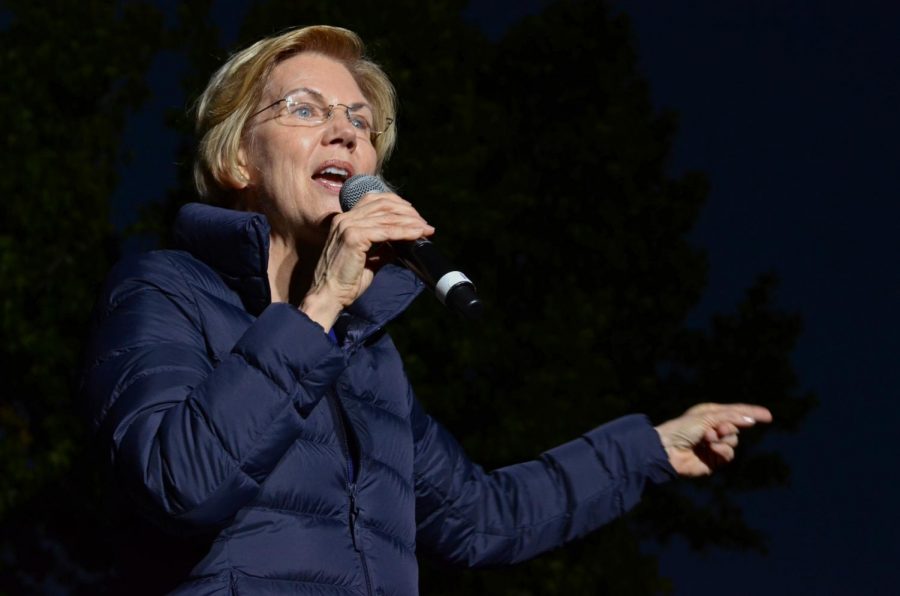 One Response to ““Dream big, fight harder”: Elizabeth Warren has a plan for American families”