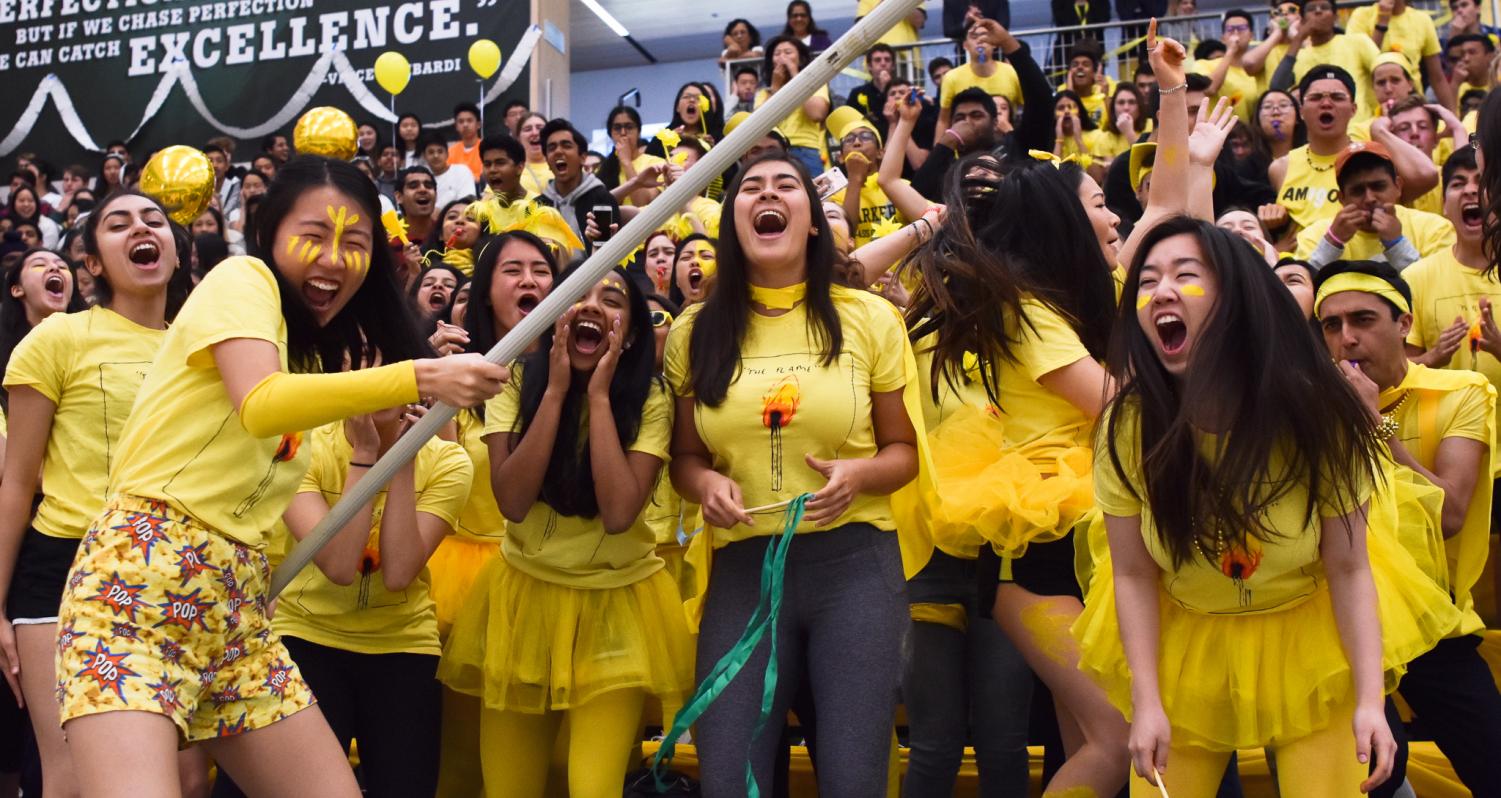 Kelsey Wu (12) waves the senior class flag while Karen Krause (12), Sahana Narayan (12) and Shania Wang (12) cheer to her left. The seniors earned the most spirit points this year. (Nicole Chen)

Kelsey Wu (12) waves the senior class flag while Karen Krause (12), Sahana Narayan (12) and Shania Wang (12) cheer to her left. The seniors earned the most spirit points this year.

Harker heats up for spirit week

For members of the upper school community, the five days after spring break ended weren’t just any few days: it was spirit week, which meant over-the-top costumes, class competitions nearly every day, and an uplifting mood that spread throughout the whole campus.

On Monday during lunch, students and faculty dressed in music and movie-themed clothing flocked the Singh Aquatic Center, where students participating in the unicorn race, in which two teams of two represented each class and raced to and fro from the ends of the pool twice, waited on the edge of the pool.

Once the race began, the students swam frantically, pushing their partners while kicking up sprays of water. Their partners sat on the unicorn floaty, holding on tightly and hoping to stay on top while racing to each end of the pool and back.The sophomores came in first, followed by the freshmen, and then the juniors and seniors who tied in the end due to penalty points.

Next up was the belly flop contest, in which both students and faculty participated. The students each gave a short performance as they approached the diving board, featuring songs like “We Are the Champions” by Queen. Out of all the contestants, senior Matthew Hajjar took the gold with his “The Little Mermaid”-inspired performance to “Part of Your World.” Ray Wang (10) danced to “Baby” by Justin Bieber, which he said was a last-minute decision.

“I only knew I was participating in it the afternoon before, so I didn’t have a lot of time to prepare,” Ray said. “I had to pick a song for the performance and I just thought about what else can I do, how was I going to step up to the diving board and what I could do to entertain people.” 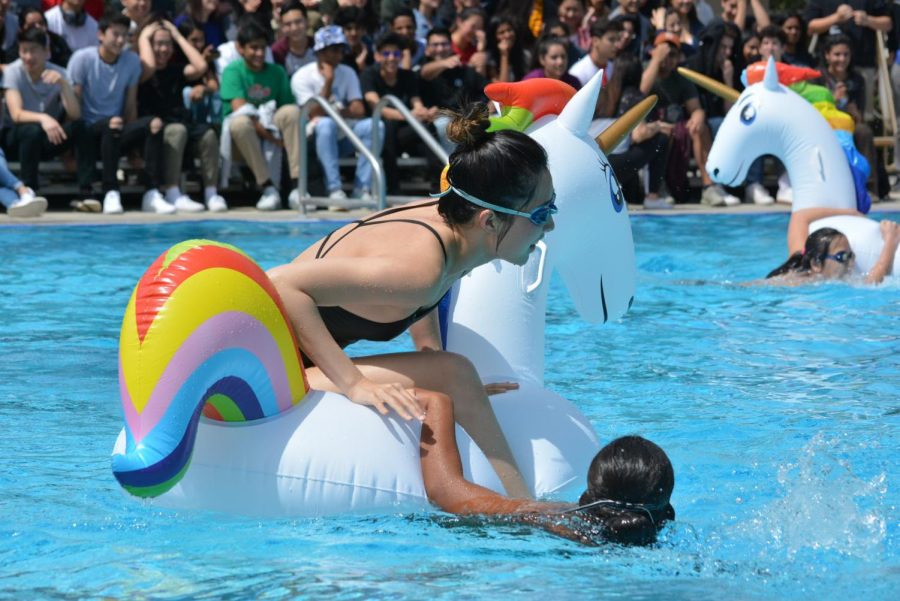 Gallery|4 Photos
Emily Tan
Angela Li (12) tries to climb onto her unicorn floaty during the regatta on Monday Apr. 8. The seniors tied with the juniors for third place in the unicorn race.

The freshmen played the juniors and sophomores went head-to-head with the seniors in the Athletic Center as the first round of the volleyball competition started at the beginning of lunch on Tuesday Apr. 9. After a short game to 11 points, the juniors and seniors came out on top in their respective matches and continued to the finals.

Dressed in different themes by advisory, students, faculty and staff squeezed into the Athletic Center at 9:35 on Wednesday, Apr. 10 to watch the Roar contest, as well as the volleyball competition finals. Yejin Song (9), a member of the freshman council, participated in and helped oversee planning and looks back on the preparations behind their Roar.

“We watched videos of Mitty because they were what we were basing the Roar idea off of anyway, so then we got a sense of what it looks like, formation-wise,” Yejin said. “It might not have been the greatest performance, but we created good memories, and it was a good experience.”

Participants from all grade levels brought buckets, pipes and cans out to center stage, and a harmony of claps, stomps and clinking sounds, sometimes paired with a dance number, took over the gym as each class delivered its performance. According to Hannah Lak (12), the busy process of putting together the senior roar included both making instruments and creating rhythms, as well as choreographing a dance and acrobatics performance.

“I think we definitely learned that there can be a good balance between preparation beforehand and improvisation because we definitely had to have a lot of preparation to make the whole rhythm thing work,” Hannah said. “But also the spontaneity of the acting and the dancing and just the structures of where we went and what we did, I think it would’ve decreased from what we were doing if we had planned all of that out.” 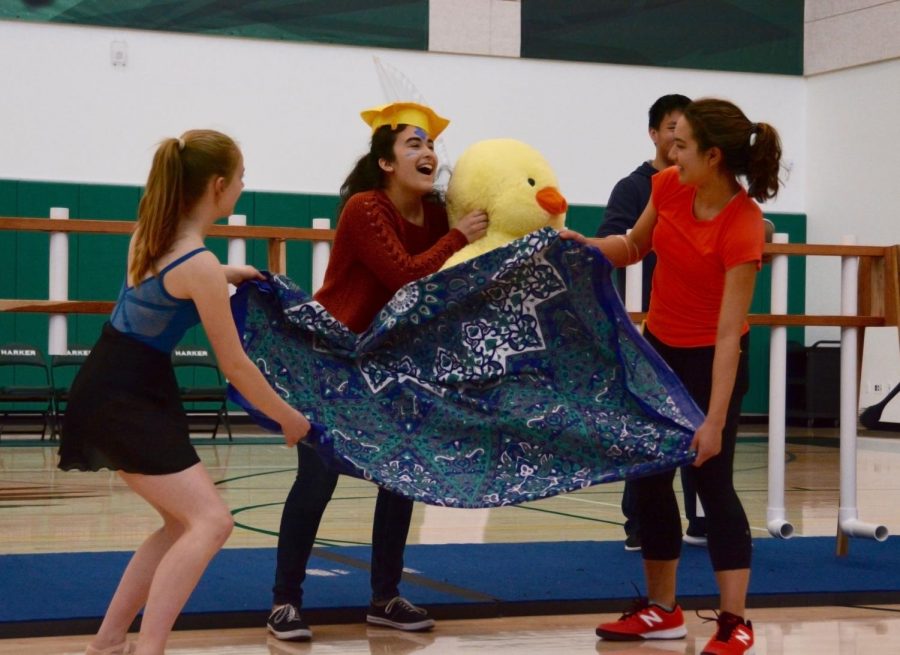 The seniors won the gold in the Roar competition, followed by the sophomores and then the juniors, with the freshmen coming in last. After Roar, the junior and senior volleyball teams stepped onto the court. Even though the seniors won with a score of 16 to 14, junior Ashley Jazbec recalls the excitement she and her teammates felt as they played in front of the entire school.

“The seniors played better than we expected; the girls played really well,” Ashley said. “It was really nice to see the turn out of everyone who was excited to participate even if they weren’t as familiar with the sport and just to not be afraid to play in front of the school.”

Moving on to the next round, the seniors faced the faculty in yet another tight match. Once again, even though the faculty took the lead at the beginning, the senior team gained a comfortable lead and won with a score of 10 to 6.

“It’s fun. You go out and play, and part of it is you know that you’re going to make a fool out of yourself in front of the 800 teenagers over there,” Dean of Academics Kelly Horan, who played in the game, said. “I thought spirit week was fabulous this year; it brought a sense of camaraderie and competition between the classes.” 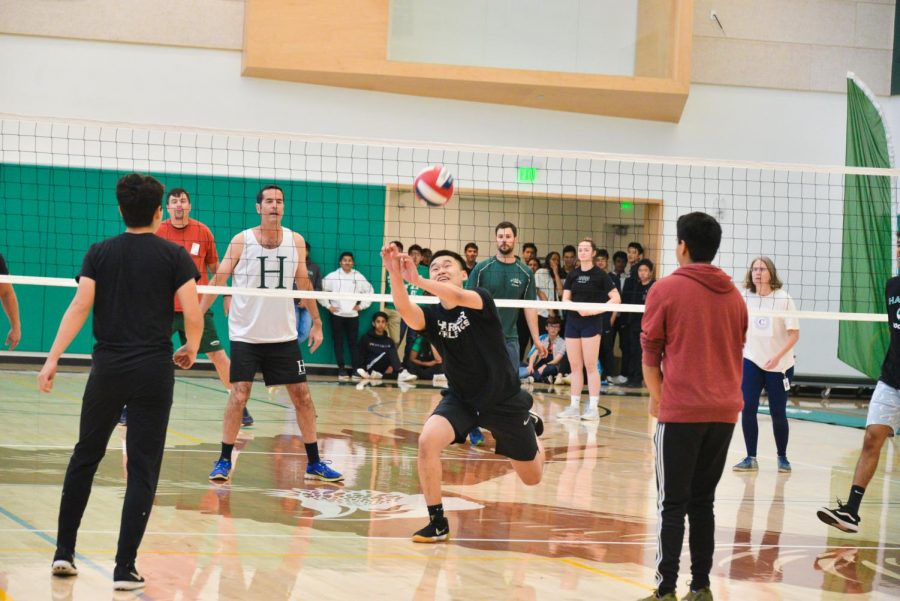 Gallery|3 Photos
Kathy Fang
Gene Wang (12) reaches out to spike the ball in the student-faculty volleyball game during Friday's spirit rally. The senior class, the champion of the student tournament, faced off a team of faculty members and won.

After a day of students dressed in meme-inspired outfits, Friday’s spring rally arrived, and each class wore in their respective class colors to show support.

First up was a performance by the cheer team, followed by the freshman and then the sophomore dances. During the rally, representatives from each class participated in active competitions, such as the spelling race and the drag race, both of which the senior class won. For the spelling race, groups of 10-15 representatives from each class had to form letters and shapes with their bodies lying on the ground. After a tiebreaker round for first place, the seniors emerged victorious over the juniors by forming a question mark more quickly and correctly. As for the drag race, two members from each class dragged a third on a blanket-like sheet across the gym, around the cone, and back, where each team member switched with another one. After the first few laps, the seniors pulled ahead and ultimately won this event as well.

I think spirit means creating a community for the people at your school where they can come together and support each other. As it’s become a bigger part of Harker, the culture of our community has grown and it’s been really nice to watch that.”

After the junior varsity dance team’s performance to “Youngblood” by 5 Seconds of Summer, the classes competed in the puzzle relay race, in which students picked up a piece of a large puzzle, ran to the other sideline of the basketball court, placed it down, and ran back, allowing the next person in line to run. When all of the pieces were in a pile, one student was allowed to rearrange the pieces, which formed a shape relating to the respective class’ theme for spirit week: earth for the freshmen, fire for the sophomores, water for the juniors and air for the seniors. In this competition, the freshmen took first place, followed by the sophomores, juniors, and then seniors.

Next up were the junior and senior dances, and the rally concluded with a game of “Name That Tune” between two advisers from each class, featuring songs like “I Want It That Way” by the Backstreet Boys, “Livin’ on a Prayer” by Bon Jovi and “Single Ladies” by Beyoncé. By the end of the rally, the seniors had the most spirit points, followed by the juniors, sophomores and freshmen. As students began leaving, Kelsey Wu (12) and the jazz band played ambient music.

As the week ended, Ashley contemplated on the larger purpose of spirit, which means more than just dressing up in wacky costumes and participating in exciting contests.

“I think spirit means creating a community for the people at your school where they can come together and support each other,” she said. “As it’s become a bigger part of Harker, the culture of our community has grown and it’s been really nice to watch that.” 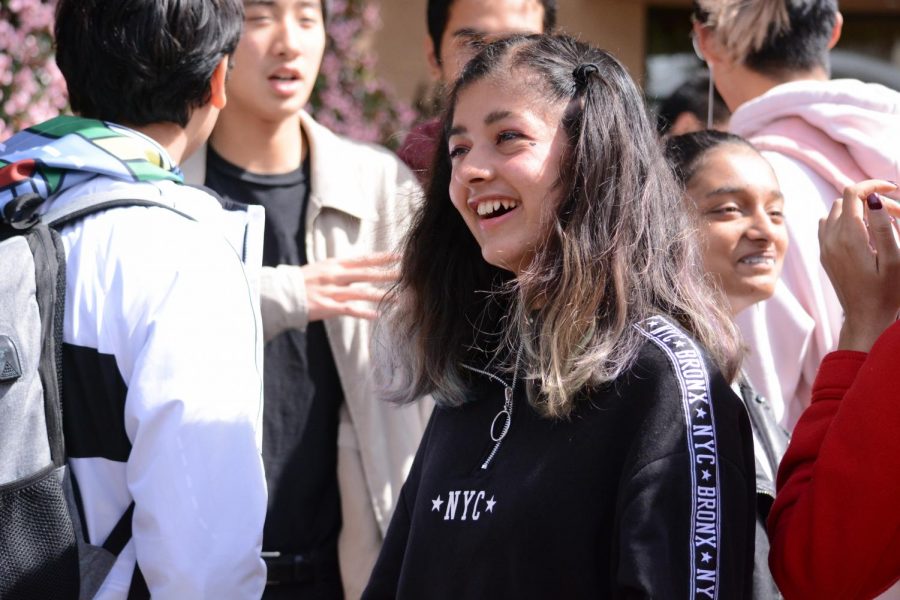 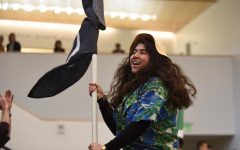 In pictures: Spirit Week one day at a time 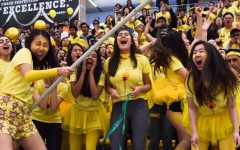 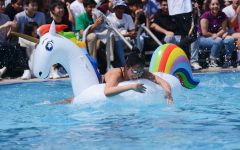