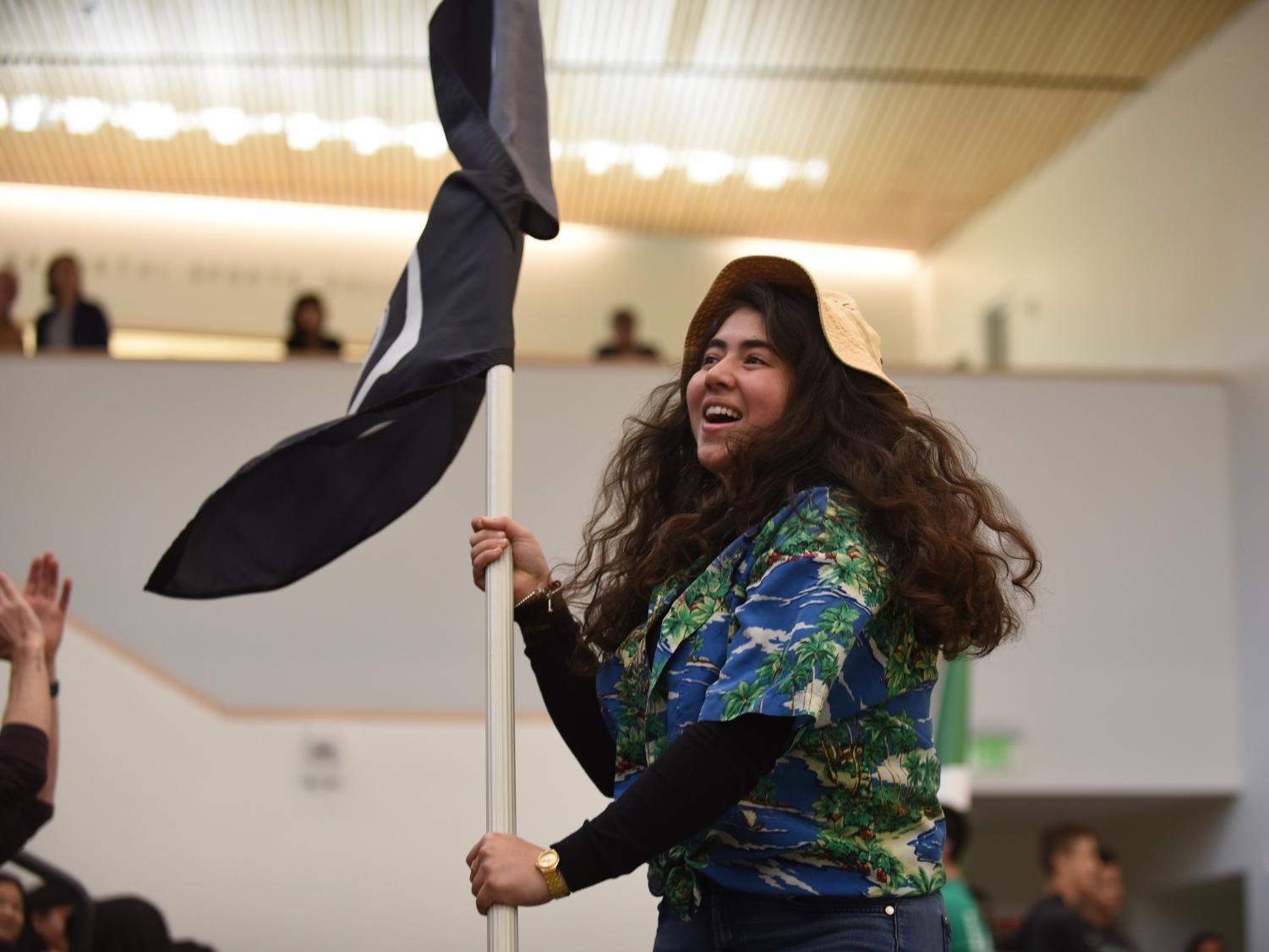 Grace Hajjar (11) waves the 2020 class flag in support of her fellow juniors. The juniors lost the volleyball game to the seniors, who went on to participate in the student-faculty volleyball game. (Irina Malyugina)

Grace Hajjar (11) waves the 2020 class flag in support of her fellow juniors. The juniors lost the volleyball game to the seniors, who went on to participate in the student-faculty volleyball game.

In pictures: Spirit Week one day at a time

This year’s spirit week kicked off with Movie/Music Day, where students dressed up as characters from their favorite movies or wore merch from their favorite artists. The school saw costumes ranging from the iconic white-and-yellow checkered suits of Cher and Dione from Clueless to students decked head to toe in BTS merch. During long lunch, students gathered to witness members of their class compete in the regatta, where four students from each class took turns pushing each other across the pool on an inflatable pool unicorn.

The juniors faltered in the event, losing their first place title of two years to the sophomores who won gold, followed by the freshmen. Both the juniors and seniors tied for third due to penalties for not sitting on the unicorn.

Spirit week continued with Time Travel Day, where students could wear clothes from different times and eras, including the future. The 90s was a particularly popular era to emulate, as well as the 60s. A highlight costume were twins William and Thomas Rainow (11), who walked into class with an electric keyboard and a boombox blasting George Michael’s “Careless Whisper.”

Tuesday was also the first installment of the class vs. class volleyball games, where the juniors squared off against the freshmen, and the sophomores competed against the seniors. Both the juniors and seniors emerged victorious in the end and would move on to compete against each other Wednesday after Roar.

For advisory dress-up day, students showed their pride by wearing creative costumes that included all members of their advisory. Roar, the newest element of spirit, is a percussive event that emphasizes rhythm without the use of instruments.

The event took place in the gym in addition to the final junior vs. senior volleyball game which would lead up to the long-awaited faculty vs. student volleyball game. Though very close, the juniors never getting more than one point ahead of or behind their opponents, the seniors emerged victorious and moved on the face off against the teachers.

The seniors ended the assembly with a moving Roar performance filled with humor and highlighting their imminent graduation.

Arguably everyone’s favorite day, Meme Day, occurred on Thursday. The passing bells were changed to iconic meme songs and vines, and even the teachers got involved, including sophomore class dean Ms. Green dressing up as the Stephen Crowder “Change My Mind” meme. A group of around 20 students dressed up as iconic Harker meme sophomore Michael Eng, all decked in bright orange shirts they bought off him for $3.

The day of the rally finally arrived, and the classes, blazoned in their class colors, marched into a yellow, green, black and white decoration-decked gym to face off in the biggest spirit event outside of homecoming.

The rally included a drag race, in which the seniors won, a spelling race, where students had to make a shape or a letter using their bodies and which the seniors also won, a puzzle relay with their respective class themes of earth, wind, water and fire, a sing-off between the teachers of each class where speech and debate teacher Scott Odekirk notably wowed the audience with his vocals to Bon Jovi’s “Livin on a Prayer,” and, of course, the spring rally dance.

The freshmen performed with lots of heart, even including many of the freshmen advisors in the beginning of their Moana-themed dance. The sophomores stepped it up from last year, showcasing their improvement through their teamwork and coordination. The juniors, reigning champions of the spring rally dance, once again wowed the audience out of their seats. The seniors’ dance, inspired by the cartoon Avatar the Last Airbender, included a journey through all four elements and ended the dances on a heartwarming note.

The seniors once again won spirit this year, with the juniors following in a close second, the sophomore in third and the freshmen in fourth.