Through the years: A history of gun legislation in the U.S. 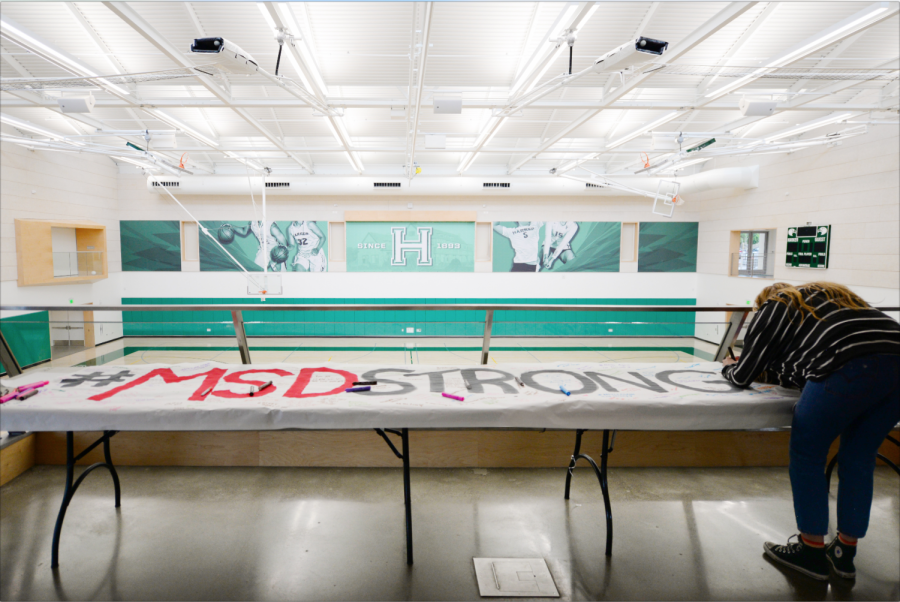 A student signs the banner that will be sent to Marjory Stoneman Douglas High School as a sign of support in the aftermath of a Feb. 14 shooting that left 17 students and faculty dead. The Florida Senate responded to the shooting by passing a bill that raises the minimum age to purchase firearms, bans bump stocks and allows sheriffs to appoint and arm “school guardians.”

After the shooting at MSD on Feb. 14, which left 17 students and faculty dead, Florida Gov. Rick Scott passed a new law on March 9 prohibiting gun sales to individuals less than 21 years of age and banning bump stocks. The law also allows certain faculty and staff members in schools to be licensed and trained to use firearms.

The Florida bill has since come into national scrutiny as people across the nation, ranging from students to gun owners, take to social media to criticize the bill either for failing to address the issue or for placing too many restrictions on Second Amendment rights.

On the federal level, with the recent rise of mass shootings, gun legislation has become the subject of national debate, with staunch supporters of the Second Amendment resisting demands for stricter regulation of firearms. Those calling for the protection of the right to bear arms claim that laws regulating gun ownership violates the Constitution, while those advocating for increased government control believe that the freedom to bear arms should not include weapons capable of mass destruction.

Since the enactment of California’s Proposition 63 in January 2018, individuals in California are required to pass background checks and obtain a four-year permit before purchasing ammunition, and all owned firearms must be registered with the California Department of Justice. California law also prohibits the practice of concealed carry and the purchase of assault weapons, including the AK and AR-15 series.

For the most part, federal gun legislation continues to be nebulous while various groups have called for stricter background checks and bans on weapons like assault rifles, no such act has stayed in effect for longer than a decade.

“At the federal level, there’s not a lot of legislation passed because it’s not in their purview. When they tried to pass, for example, the Gun-Free School Zones Act, it was challenged and went all the way to the courts; United States v. Lopez ruled that the federal government doesn’t have that right,” upper school history teacher Carol Green said.

The Gun-Free School Zones Act of 1990 prohibited the possession and use of a handgun near public, private and parochial schools. It was deemed unconstitutional in the United States v. Lopez case on the grounds that the federal government could only impose regulations directly related to interstate commerce, as stated by the Constitution.

Here is a rundown of major historical changes in U.S. gun legislation: 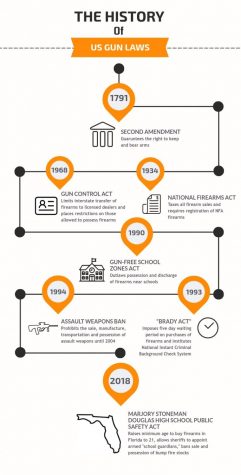 The Second Amendment, adopted in 1791, protects the right of the people to keep and bear arms. It has since become the centerpiece of countless debates over the regulation and restriction of firearms which have the potential to cause mass destruction.

The National Rifle Association (NRA), founded in 1871, is a nonprofit organization that historically has opposed laws restricting the possession or sale of firearms, claiming that it is “America’s foremost defender of Second Amendment rights.” The NRA is believed to have influenced many federal decisions on gun restrictions and regulations, and many members of both Congress and the president’s cabinet are affiliated with the NRA.

The first limitation on the freedoms guaranteed by the Second Amendment was passed by former President Franklin D. Roosevelt in 1934 after the gangland crimes and the St. Valentine’s Day Massacre. The National Firearms Act (NFA) instituted a $200 tax on the making and transfer of certain firearms. Registration of the sale of all NFA firearms was required with the Secretary of the Treasury.

The Supreme Court ruling of Haynes v. United States in 1968 greatly weakened the power of the NFA, as the Supreme Court found that the prosecution of prohibited persons in possession of an unregistered firearm violated the self-incrimination clause of the Fifth Amendment and as a result was unconstitutional. The NFA was thereafter modified such that it applied only to those who could lawfully be in possession of a firearm.

The Gun Control Act (GCA), introduced in the House of Representatives and signed into law by former President Lyndon B. Johnson, was passed following the assassinations of former President John F. Kennedy in 1963 and civil rights movement leader Martin Luther King Jr. in 1968. The act banned interstate transfers of firearms with the exception of transactions facilitated by licensed dealers and prohibited the sale of both firearms and ammunition to felons and other groups.

The Firearms Owners’ Protection Act of 1968 amended the Gun Control Act by redefining the term “gun dealer,” permitting the interstate sale of rifles and shotguns and banning the sale of machine guns manufactured after the date of the Act.

The Gun-Free School Zones Act of 1990 made the knowing possession of and discharge of a firearm in a school zone illegal. Applying to public, private and parochial schools, the act was signed into law by former President George H.W. Bush. The only exceptions to this law were the possession of or discharge of the firearm by an individual as part of a school program or by a law enforcement officer acting in official capacity.

After the United States v. Lopez case, however, the act was deemed unconstitutional and revised to apply only to guns involved in interstate commerce.

The Brady Handgun Violence Prevention Act of 1993 required federally licensed importers, manufacturers and dealers of firearms to wait for a period of five days before delivering a handgun to an unlicensed individual. Individuals evaluated by mental institutions a “mental defective,” criminals at large and those convicted of a misdemeanor crime of domestic violence were prohibited from shipping, receiving or possessing a firearm under the Brady Act.

The Federal Bureau of Investigation (FBI) instituted the National Instant Criminal Background Check System (NICS), a measure first introduced by the Brady Act, in 1998. Used today to confirm if a prospective buyer meets the age requirement for the lawful purchase of a firearm, the NICS cross-checks submitted information with the National Crime Information Center, the Interstate Identification Index and the NICS index.

The Public Safety and Recreational Firearms Act, also known as the Assault Weapons Ban, prohibited the manufacture, transfer and possession of semiautomatic assault weapons for 10 years. An assault weapon is defined to be a military-style weapon capable of either semiautomatic or fully automatic discharge.

Feinstein has not ceased her endeavors to renew the ban. A little more than a month after the October 2017 Las Vegas shooting and just three days after the November 2017 Sutherland Springs shooting, Feinstein, along with 22 other Senate Democrats, put forth the Assault Weapons Ban of 2017. The bill would prohibit the sale, manufacture, transfer and importation of 205 defined “military-style assault weapons.” Since November, it has been read twice and referred to the Committee on the Judiciary.

“After each shooting, we’re told it’s not the right time to act. We’re told to respect the victims by sitting on our hands,” Feinstein said in a statement released on her website. “Well, the time for inaction is over.”

On March 9, the Florida Senate passed the Marjory Stoneman Douglas High School Public Safety Act, which prohibits a “mentally defective” person from possessing a firearm and allows sheriffs in their respective counties to set up a Coach Aaron Feis Guardian Program.

The guardian program, named after the football coach at MSD who died shielding his students during the shooting, will grant sheriffs the authority to appoint volunteer school employees as “school guardians” to be licensed and trained in firearm safety and proficiency.

The act, signed into action by Florida Gov. Rick Scott, also establishes a three-day waiting period for the purchase of firearms and raises the minimum age to purchase a firearm from 18 to 21, a divergence from the federal law (GCA) that would have prevented 19-year-old Nicolas Cruz, the shooter at MSD, from obtaining a firearm. In response to Scott’s action, the NRA filed a lawsuit claiming the act of banning individuals under the age of 21 from buying firearms unconstitutional.

While the act does define and prohibit the sale and possession of bump fire stocks, a device that can accelerate the firing rate of a semiautomatic weapon up to that of an automatic weapon, it does not place limitations on military-style assault weapons.

The Bureau of Alcohol, Tobacco, and Firearms