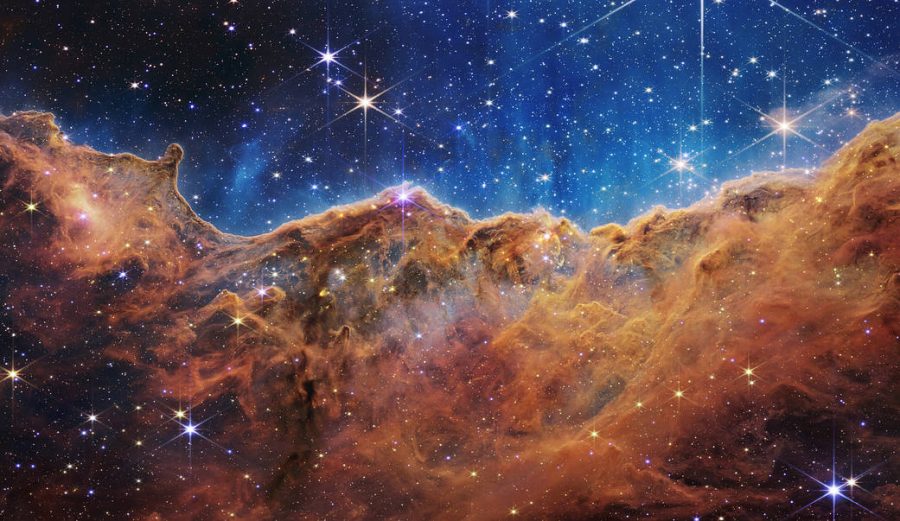 An image of cosmic cliffs in the Carina Nebula, taken by NASA’s James Webb Space Telescope. With more and more technologies pushing the limits of space exploration, two Harker Aquila writers argue for the pros and cons of exploring our universe.

When the James Webb telescope images were released in July, the vastness of outer space amazed me. I had the realization that each of those minuscule sparkles and swirls in the sky represents a whole galaxy full of possibilities — yet that image still only captures a single slice of the universe.

In American culture, space has always maintained that element of enigma and intrigue: endless planets to explore, new lifeforms, unknown dangers. These ideas litter popular media and led to the creation of some of the most beloved franchises of recent history.

But space not only represents a vital aspect of pop culture, it also dares us to dream with boldness. Space calls on us to search for meaning and life and reaches across all the division and partisan boundaries to bring hope towards a common goal.

We should continue exploring space, continue pursuing knowledge that lies beyond our own atmosphere, not just because of the hope and dreams which it represents, but also for the extensive, tangible benefits which space exploration creates for our society.

Although the money used for the National Aeronautics and Space Administration (NASA) could also be used to directly help people on our home planet, NASA actually has an estimated revenue of $7 billion, creates more than $64 billion in economic output and supports over 300,000 jobs. And NASA’s benefits are more far reaching than just this.

We should continue exploring space not just because of the hope and dreams which it represents, but also for the extensive, tangible benefits which space creates for our society”

What do memory foam, CAT scans, GPS navigation and anti-gravity treadmills have in common? They were all developed for NASA. Though space exploration may seem like something that would rarely affect the average person, we interact with NASA technology every day. For example, the cell phone cameras we use take high-quality videos and use less power because of the advent of CMOS sensors, which were invented for NASA’s Jet Propulsion Laboratory so that NASA could take small cameras on space missions. Often, optimizations made for space lead to better lives for people who live on Earth.

Although we still need to exercise caution when exploring space, potential dangers are not necessarily reasons to stop or limit exploration. We should continue ongoing discussions of ethical topics such as risks to the lives of astronauts or the issue of claiming extraterrestrial land. Space ethics is and will be a vital field that requires more research and development as time goes on, but technology develops slowly — these ethical risks, especially those associated with transporting humans to distant planets, or even planets in our own solar system, are far-off from our present capabilities.

Limiting our own exploration of space slows the movement of progress, and who wants to live in a world where we stop ourselves from reaching the promise of the future? Space challenges us, captivates us; it creates a common goal that extends beyond humanity and into the stars.

Flying too close to the sun

The first images taken by the James Webb Telescope have recently returned to Earth on July 12 and quickly spread among an eager public. But before we let those swirling galaxies hypnotize us and those sparkling colors dazzle our eyes, we should first acknowledge the dangers of space exploration in order to protect against possible hazards.

With venturing into unknown territory comes the risk of polluting extraterrestrial ecosystems, and of accidentally carrying harmful substances back to Earth. The first scenario falls under forward contamination, or bringing microbes from Earth into space, and the latter constitutes backward contamination.

A report published by NASA in 2015 identified 25 knowledge gaps, or unanswered questions, regarding the handling and decontamination of samples retrieved from space. Scientists have not yet detected signs of extraterrestrial life, but as missions bring back more and more material taken from Mars, comets and asteroids, we should process these substances carefully to protect Earth from potentially hostile microbial life or foreign toxins.

Before we let those swirling galaxies hypnotize us, we should also acknowledge the dangers of space exploration in order to protect against possible hazards”

On the flip side, what about the effect human actions may have on extraterrestrial life? The growth of private space flight brings the issue of regulating these missions so that they follow planetary protection (PP) procedures. For example, when tech entrepreneur and SpaceX CEO Elon Musk launched a Tesla roadster into space four years ago, scientists worried that the unsterilized car could potentially hit Mars in the distant future, contaminating it with bacteria from Earth and disrupting the planet’s ecosystem.

The question of overseeing the private sector increases in urgency as companies can more easily manufacture and launch small spacecraft; in line with this trend, Musk has stated a goal of sending people to Mars by 2024. While NASA conducts thorough sterilization of its spacecraft and has extensive knowledge on PP procedures, it does not have regulatory power to control licenses for commercial spaceflight and ensure that proper safety guidelines are being followed elsewhere.

In further considering the impact humans might have on extraterrestrial biospheres, we can also turn our attention towards Earth. We do not have a stellar record when it comes to preserving ecosystems and biodiversity, even on our own planet. According to a 2019 IPBES report, almost one million plant and animal species face the threat of extinction as a result of human activity such as logging, poaching and mining. While this by no means guarantees that we will affect space in the same manner, it reminds us that our desire for growth and progress can at times compromise our considerations for the life around us, a mistake we should not repeat when extending our presence to new worlds.

Space exploration can bring benefits such as new technology and a better understanding of the universe, but we should not let our excitement, or arrogance, blind us to the harm we could impose. If we conduct our exploration through an ethical lens and with a humble outlook, we can ensure that the benefits we gain truly advance humanity forward by promoting a respect and appreciation for our place in the universe.