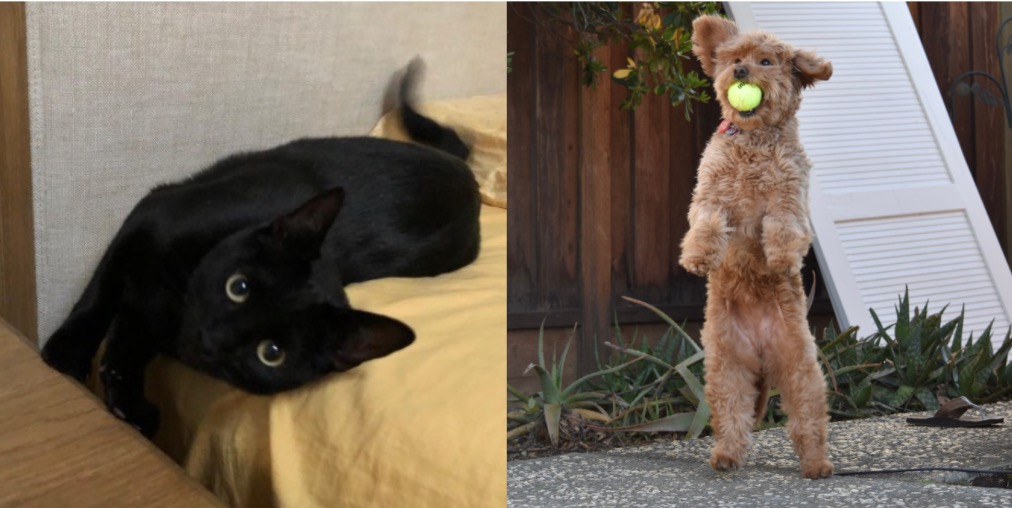 Erica Cai’s (12) cat Taro romps around on her bed, while Muthu Panchanatham’s (12) dog Pixie stands on her hind legs and catches a tennis ball. Let the contentious battle of which is the better furry friend, cat or dog, commence! (Erica Cai and Muthu Panchanatham)

Erica Cai’s (12) cat Taro romps around on her bed, while Muthu Panchanatham’s (12) dog Pixie stands on her hind legs and catches a tennis ball. Let the contentious battle of which is the better furry friend, cat or dog, commence!

Perspectives: Cats against dogs, locked in a furry debate

by Erica Cai and Muthu Panchanatham

Cat supremacy: Allow me to purr-suade you

If an alien browsed the Internet’s cornucopia of cat content, they would surely think the average human loves cats. And yet, cats seemingly have a worse reputation than their canine counterparts. Mistaken for being aloof, insensitive and apathetic, cats are woefully misunderstood.

Despite being very independent, my own little furball Taro loves to spend time with people, though he would (probably) never admit it. From ceaselessly trotting over my keyboard during Zoom classes to now dashing out of the bushes next to the driveway to surprise me upon my return back from school to settling into my lap to take his evening naps as I do homework, Taro never fails to rejuvenate me even after the most exhausting of days.

Friendships between cats and humans are also more genuine and profound than those between dogs and humans. A 2017 study showed that, unlike dogs, who are very easily motivated by food and toys, both pet and shelter cats preferred to interact with humans over interaction with food, scent or toys.

My personal experience affirms these results—while Taro is not one to pass on a juicy chunk of chicken, he also refuses to eat unless in the presence of a human and will meow incessantly until someone accompanies him to his food bowl. These results prove that not only are cats social creatures just like dogs, but they may even have a higher propensity toward forming permanent and long-lasting connections with their respective humans.

Okay, so cats love their owners as much as dogs do. But a dog lover who especially hates cats may argue that cats are not friendly toward strangers, which makes them less appealing than dogs, right?

Wrong. In a 2019 study on the effects human attention and familiarity had on cat sociability, researchers found that cats whose humans gave them more attention would, as a result, spend more time with the person. This result was true not only when cats were paired with their caretakers, but also when cats were paired with strangers. Yes, cats are as sociable as dogs—no matter what human they interact with.

Not only are cats as social and amiable as dogs, but they also have the potential to improve the health of their humans outside of the health benefits observed in any person who owns a pet. That’s right, cats have magical healing powers.

In a 2001 study of the purpose of cats’ purring, researchers found that the frequencies at which domestic cats purred overlapped with the frequencies of vibrations that can promote bone growth or tissue repair. The frequencies also aligned with vibrations used in therapeutic medicine for humans. So, not only can cats heal themselves, but they can also heal and calm their humans with their purring. Can dogs do such a thing? I believe not.

Finally, the bond between a cat and a human is especially precious due to the history of cat domestication compared to that of dogs. Cats, unlike the artificial and human-selected domestication of dogs, self-domesticated via natural selection after observing a benefit in living close to or on human settlements. This development is especially profound because domestic cats come from ancestors who are more individualistic, unlike dogs who come from pack animals. Domestic cats’ behavior has adapted in a way that diverges from their ancestors just to be with humans.

A friendship between a cat and a human can be just as rewarding, if not more rewarding, than one with a dog. Seeking to understand cats, from their habits to their needs, will result in a much more gratifying relationship. As they say, dogs drool, and cats rule.

A bone to pick with cats

It has come to my attention that some misinformed students believe that cats are better than dogs. I will not stand for such an erroneous opinion. I will not roll over.

There’s a reason why dogs are called man’s best friend. Whenever I come home from a long day of school, dreading the mountain of homework and college app essays I have to finish before I can feel the sweet embrace of sleep, guess who’s waiting patiently at the door, wagging her tail. It’s my precious Goldendoodle and personal therapist Pixie.

Whenever my dog looks up at me, head tilted and eyes shining, I feel as though she can understand every word I say. Would a cat do that? No. A cat would ignore you. Or hiss at you. Or scratch you. As such, in the past, our school employed therapeutic dogs, not therapeutic cats, before finals week to ease the stress felt by students before taking exams.

A 2019 study investigated therapy dogs and their effects on university students’ mood and anxiety. Not only did the researchers find that directly interacting with dogs reduced anxiety, but even just watching videos of dogs improved students’ moods. I mean, can you blame them? How can one be sad while seeing a dog’s cute face?

Furthermore, dogs are a lot more interesting than cats. Be honest. Do cats do anything other than laze around all day? From going on walks to playing frisbee in the backyard, dogs are content with all forms of exercise and entertainment that are fun for their owners as well (not to mention healthy). While it is true that cats are capable at performing athletic feats such as climbing trees and landing on their feet, they rarely present the energy to do so and would rather sleep or groom themselves. On the other hand, dogs are enthusiastic about engaging in physical activity and have often been trained to execute sports skills such as setting a volleyball or surfing. Side note: Pixie actually can climb trees, so cats’ athleticism is irrelevant.

Dogs engage in a variety of quirky activities that serve as memorable and funny moments that can be shared with friends to spread a sense of joy in our communities. I can’t even count how many photos and videos I have of Pixie chasing her own tail or rolling around while basking in the sun.

From a broader perspective, dogs have unique talents that make them invaluable, especially with regards to crime-fighting. Because of their sense of smell and aptitude for learning, dogs make great companions for police officers. The San Francisco Police Department K-9 unit utilizes dogs to aid in sniffing out bombs, finding missing persons and hunting down criminals. Don’t worry, these dogs aren’t tools for the police. They still enjoy normal pet life while living with their respective handlers. The relationship between the K-9 unit and its hounds epitomizes the trust humans place in dogs and the loyalty dogs show in return.

While it may be true that both dogs and cats rightfully reside on top of the Animals Appreciated by Humans hierarchy, dogs deserve to be slotted at a higher tier than cats for their loving demeanor and wider range of applicable skills.

In case you think I’m biased, I made sure to get a second opinion. When asked if dogs were better than cats, Pixie responded with a resounding “Woof!”

There you go, undeniable proof.