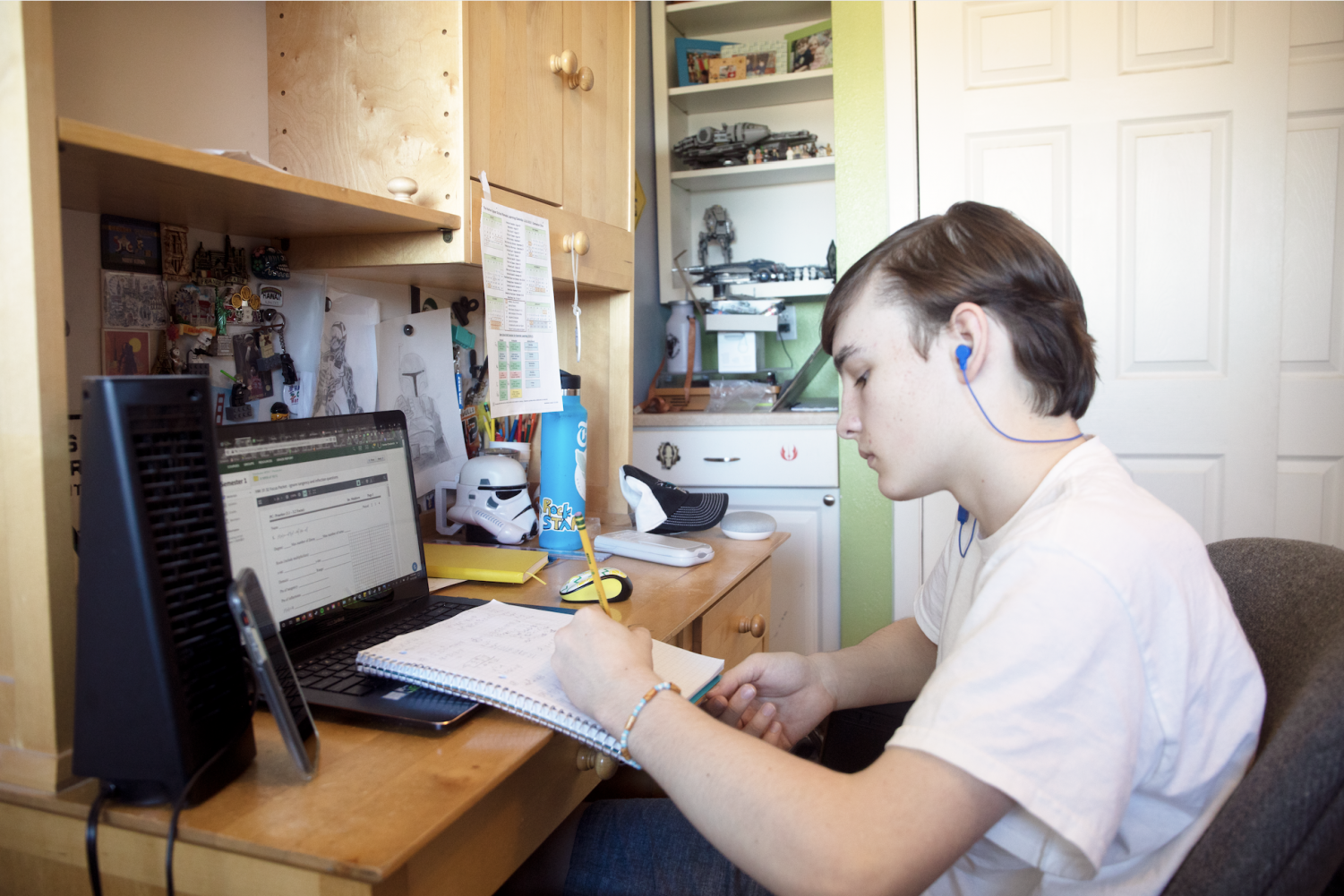 Junior Carter Chadwick works on math homework after school as upper school students continue to take classes from home. “You get out what you put in. So if you just use other people’s work, what’s the point of it? Why even take the class or go to school? That’s how I feel about cheating in general,” Carter said.

Junior Carter Chadwick works on math homework after school as upper school students continue to take classes from home. “You get out what you put in. So if you just use other people’s work, what’s the point of it? Why even take the class or go to school? That’s how I feel about cheating in general,” Carter said.

Greek philosopher Aristotle argued in his book Nicomachean Ethics that only voluntary actions, or the actual practice of virtue, could create a virtuous person. For Roman philosopher and statesman Marcus Tullius Cicero, people must weigh two fundamental factors when deciding their behavior: the honorable and the beneficial, or what is morally correct and people’s self-interests. For Harker’s Honor council, honor demands honesty, accountability, and respect.

This year’s remote four-day Honor Week, starting Tuesday, Sept. 29, gave students myriad ways to define their own personal honor code and its applications, dedicating each day to a specific aspect of the new honor code.

“[The honor week] activities are useful to keep reminding students that, despite their busy schedules, some things are more important,” Galina Tchourilova, one of the three faculty members on Honor Council, said. “You should not lose [honor] in your perspective otherwise you lose part of yourself.”

The first day of Honor Week, students watched a video produced by Honor council with their advisories that outlined the changes made to the honor code and then digitally signed the document with their advisor. The previous honor code had the original four tenets (acceptance, honesty, respect and environment), while the revised honor code now features only three: honesty, accountability, and respect, all of which ultimately work together to reinforce an ideal environment.

‘The [past] tenets didn’t really make sense together, so instead we changed it to be more clear. Now, you can be respectful, you can be accountable, you can be honest, and then what these three build into is an environment of trust,” Honor Council representative Bryan Zhang (12) said.

During that advisory period, advisors also orchestrated discussions about honor, covering topics on the meaning of honor, strategies by which students can hold themselves accountable, and ways the concept of honor has changed in remote learning.

Harshini Chaturvedula (9) initially felt concerned about the community upholding integrity in a digital setting, but both the measures put in place by Honor Council and conversations with her classmates served as reassurance.

“It was a really important [advisory] discussion and people actually got involved with it so it shows that people care about this topic [of honor],” she said. “It’s an important subject and i appreciate the fact that we have Honor Week in high school [because] it reminds everyone to keep their minds in check.”

On Wednesday, which was environment-themed, the Honor Council challenged students to submit before and after photos of a newly organized workspace, take a photo of nature and research ways to fight climate change on an individual level.

As part of the fourth day of honor week, students watched Stanford University Judiciary Panel member Millie Lin’s (‘18) video interview, which was produced by Honor council. Her interview discusses the importance of honor during remote learning, and how it plays an even larger role in higher education.

On Friday, Honor Council and Harker Eclectic Literary Magazine (HELM) hosted a workshop to discuss ethics and plagiarism in the context of the arts.

“Being away from everyone reduces that sense of community and trust: we are not all coming to campus,” upper school chemistry teacher Casey Brown said. “And so the kinds of things that cause us humans to behave in ways that are community-minded—it is harder when the community is distanced.”

by Sriya Batchu and Aditya Singhvi

As classes shifted to a virtual format last spring, many upper school teachers canceled tests and quizzes over fears of cheating and a lack of rule-enforcement in a virtual format. Now, armed with the knowledge of a semester of remote learning, teachers have adapted to online testing, shifting toward open-ended and project-based assessments.

One method to curb cheating that teachers have used is intentionally making their tests challenging and grading on a curve, preventing students from sharing test questions and collaborating to avoid hurting their own grades. Others have shifted to open-note assessments, asking more subjective and proof-based questions with time pressure to prevent internet searches.

“I feel like the different techniques teachers are using are great because now you have a sense of trust with your classmates. Because of the increased regulations, you can rest easy that the other students are not cheating which will lessen your temptation as well,” said Bryan Zhang (12), one of the senior Honor Council representatives.

How can we expect students to learn to do the right thing when no one’s watching when teachers are always watching? Personally, if I watch you like a hawk, I feel like I’m telling you that you don’t have honor”

On the other hand, some teachers — such as upper school economics teacher Samuel Lepler — have rejected these intrusive methods of supervision, instead hoping to foster honesty through mutual respect.

“I like to treat my students the way I want to be respected and trusted. How can we expect students to learn to do the right thing when no one’s watching when teachers are always watching? Personally, if I watch you like a hawk, I feel like I’m telling you that you don’t have honor,” Lepler said.

According to a schoolwide Honor Council survey, 21% of Harker students have cheated at least once on a major assessment, although only 3.7% admitted to cheating “sometimes,” “often” or “always.” At the same time, 77% out of 730 respondents believe that cheating has increased in a virtual format.

Ultimately, teachers want to assure students that although they empathize with the struggles and temptations of virtual learning, honest work is appreciated over dishonest performance.

“I get the day-to-day pressures and I get the temptations to cut corners. I hope students know we are sympathetic to the pressures that they face,” upper school history teacher Katy Rees said, “We will do all that we can to help them succeed in our classes, but we are a lot less than sympathetic when students use dishonest ways to pull themselves up.”

Behind the scenes: How did Honor Council prepare for a virtual honor week?

“Things online definitely proved more difficult and really weird specifically in the context of Honor Week, because normally the focus of Honor Week is to have discussions about honor and to really reflect about how we can embrace honor in our community and what we see that has to do with honor around us,” junior Honor Council representative Rohan Thakur said. “In remote learning, it proved more difficult to have these casual conversations.”

To adapt to a remote environment, the Honor Council shifted the week’s activities to those that are both more accessible and engaging in an online format, incorporating two videos, fostering discussions during class meetings, creating environment-related challenges and holding an online plagiarism workshop in addition to sending out an anonymous online survey and its results. 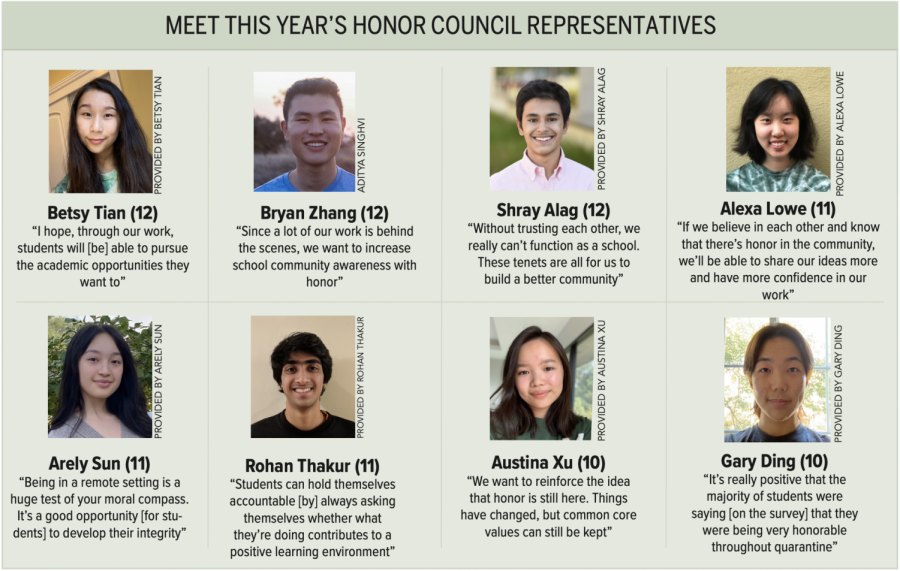 Despite a decrease in casual conversation about honor around campus, Honor Council representative Austina Xu (10) both appreciated the level of engagement and quality of student discussion during scheduled events like the plagiarism workshop, hosted jointly by HELM.

“[Because we had time to prepare this year], this was the first time for people to have organized conversations solely dedicated to honor that were pre-planned and pre-arranged,” Austina said. “It’s the first time we get to properly assess how people are viewing honor, how people are incorporating it and reminding people how to utilize it in such a different medium.”

With the current circumstances came both benefits and drawbacks: even though some advisories experienced technical issues with signing the Honor Code digitally, Austina also noted that prevalent Schoology updates more effectively publicized the week’s events. Ultimately, one of Honor Council’s main goals for the week entailed provoking thoughtful reflection about whether individuals’ actions are contributing to the supportive and uplifting nature of the Harker community.

“The main takeaway [from the week] would be, don’t forget these [tenets]. They’re easy to gloss over, but they are important. They are the fundamental building blocks of our society,” senior Honor Council representative Shray Alag said. “Without trusting each other or trusting your teacher or your teacher trusting you, we really can’t function as a school.”

With the possibility of having a second device in one hand, or post-it notes with equations plastered along the wall behind their screens, or multiple tabs open to search for answers, resisting the temptation to cheat has never been tougher. Now, more than ever before, members of the Harker community depend on students to hold themselves accountable in their work, a sentiment Honor Council emphasized throughout Honor Week.

“One of the activities [for Honor Week] was a poll because [cheating] was something that we overhear about a lot. [From the results of the survey,] many more people think that others are cheating than acknowledging that they do so,” Tchourilova said.

Students are working to ensure that they can keep themselves accountable by implementing their own testing strategies, such as deleting tabs or windows, distancing themselves from their phones, and turning off all notifications.

“It isn’t easy [to stay focused]. I’ve caught myself trying to wander off to another website [during class] because there are so many distractions.” Harshini said.

In Thomas Liu’s (9) physics class, his teacher has him use his phone to record his paper and sign an honor code during tests. However, his other teachers do not have the same policy.

“Most of my teachers just trust me to be honorable, which is reassuring,” he said.

The internet is strange. Our computers are on all the time, phones run out of batteries, you only have so many chargers, and your brother and your sister and your father are all on the internet on their own computers. It is time for some understanding.”

Teachers have experienced difficulty holding students accountable when students are in their own rooms, making it even more important for students to be able to follow personal accountability and keep themselves responsible for their own learning.

Dr. Brown holds the perspective that there is not more cheating happening this year, but he also acknowledges that remote testing presents challenges in comparison to on-campus assessments.

“In person, I can have a much higher degree of confidence that I’m seeing something that is cheating,” Dr. Brown said.

Because of the online learning environment, students can encounter a multitude of technical issues that complicate the testing process, such as difficulties with setting up cameras. Ultimately, teachers like Tchourilova prioritize students’ learning over an overbearing enforcement of testing restrictions. Additionally, teachers like Dr. Brown believe that overly emphasizing surveillance may only incentivize certain students to find other means of cheating.

“The internet is strange. Our computers are on all the time, phones run out of batteries, you only have so many chargers, and your brother and your sister and your father are all on the internet on their own computers. It is time for some understanding,” Dr. Brown said.

Given the countless uncertainties and variables subject to change from student to student, the best way to ensure an honorable school environment is for students themselves to reflect on the importance of maintaining personal integrity and take action to enforce those values in their academic work.