Clicking #rollerskating on any social media platform is sure to conjure lively videos of agile roller skaters navigating the concrete mazes of skate parks, ebullient dancers jamming out on their wheels and the hiss of toe stops with “Dreams” by Fleetwood Mac playing in the background. Many have fallen for the dreamy aesthetic of quad skating depicted online, myself included. (Arely Sun)

After scouring the internet for a seller that didn’t hike up prices, convincing my parents and purchasing a pair before “5 left in stock” turned into “currently unavailable,” I took to the streets, expecting to instantly become adept at grooving on my new skates. However, that certainly was not the case. Discouraged by the call of gravity and scratched up wristguards, I started to doubt my capabilities as I compared my lack of progress to the competence of skaters darting around my phone screen. Maybe roller skating just wasn’t meant for me?

Turns out that was the reality of skating. Skater and creator of online tutorials “Rebel” Mang, known to Harker speech and debate students as Coach Dorri, warns beginners such as myself of the illusion of perfection portrayed online.

“With roller skating, people are putting their successes online, and then there’s a lot of newer skaters who are seeing all those successes and thinking that they’re not good enough because in two weeks, they haven’t learned how to turn around the toe stop or aren’t confident with skating backward. And in reality, those things all take so long to learn. Learning how to roller skate is freaking hard,” Mang said.

To combat this misinformation, new skaters are documenting their progress from day one to mastery. Rubina Bernabe, known on her social media platforms as @rollercoastinrubes, started skating in July when she wanted to find a more interesting way to exercise and has been keeping a “skate diary” to track and share her journey ever since.

[Struggle] is part of the process: I do have to fall, I have to choose to get back up. If I quit, then that’s on me.”

“I’m at a point in my life where I feel like in 2020, you really have nothing left to lose. If you’re just your honest self, it makes it more relatable and encouraging for other people who are on the same journey,” Bernabe said. “[Struggle] is part of the process: I do have to fall, I have to choose to get back up. If I quit, then that’s on me.”

Although some skaters using social media as a medium for self-expression and entertainment, roller skater Nick, who chose not to disclose his last name and goes by @nickthemedic on Instagram, recognizes the benefits and risks of dependency on these platforms.

“I got to see what other people were doing, and by watching Instagram, I go, ‘Oh, okay, I see how they’re doing that.’ And then I would take that to the skate park,” Nick said. “So while [I wanted] to learn from other people throughout the world on how to do things, I was also slowly becoming addicted to it.”

While most users have only recently found an abundance of skating videos on their “For You” pages, the roller-skating community has been flourishing for a long time.

According to “The History Behind the Roller Skating Trend” by race and culture author Ruth Terry, the concept of wheeled shoes first emerged in 1760 when flamboyant inventor John Joseph Merlin debuted a contraption for party tricks, but it wasn’t until 1863 that the quad skate we know today came to invention. James Plimpton marketed his four-wheeled contraption as an activity for men and women that replicated ice skating.

As roller skating gained traction, rinks became locations of racial tension, especially due to segregation laws. Even after the civil rights movement, rinks used euphemistic terms to describe Black-majority skate nights in an effort to retain previous segregation. Despite obstacles of prejudice, Black communities around America looked to the activity as a center of culture and entertainment.

Roller skating began to disappear from mainstream culture after its popularity in the 1930s due to roller derby, an aggressive sport where skaters attempt to pass each other, and the disco era of the 1970s. But since quarantine started in 2020, the sport has begun to make a comeback thanks to its versatility in terms of location and solitude. TikTok star and actress Ana Coto, known as @anaocto online, is widely credited for kickstarting this boom.

Coto’s preferred genre of jam skating is notably the most popular subtype of the sport. It features dancing and grooving to music and involves tricks such as turns and shoot-the-ducks. Other genres of roller skating include park skating, which involves using obstacles and ramps at skateparks; street skating, which resembles park skating but relies on commonplace objects such as curbs and poles; artistic skating, also known as figure skating on wheels; recreational skating and roller derby.

In addition, roller skating’s diversity is largely due to its relationship to other wheeled and bladed sports. Nick’s first encounters with skating were with ice hockey, but what stood out to him the most about roller skating was its emphasis on intersectionality.

“I just saw this cool little group in Australia. They’re playing roller hockey, and they’re doing five on five,” Nick said. “And then we’re seeing all these avenues, which main ones are roller derby, park skating, rink or jam skating, but there’s a whole entire competitive figure skating aspect. It’s huge in South America and Spain and Italy.”

The diversity of the skating community extends beyond genres. Artemis Peacocke, who goes by @faeiryne on social media, emphasizes the inclusivity of the activity in all aspects.

“I want everybody to realize that all body types, all races, all cultural backgrounds can enjoy and benefit from the sport and to not let it deter you just because you don’t always see people who look exactly like you out skating,” Peacocke said.

The communal nature of roller skating also encourages self-love, an important factor that has helped Mang nurture a relationship with her body and overcome her body dysmorphia.

”When I started roller skating, like, especially within derby, they were like, ‘You are at an advantage. There’s something that we can teach you that will help you to use your body the way it is to be successful and effective on the track,’” Mang said. “So through the process of that, I got to know that my body is good for something beyond just being aesthetically pleasing. It doesn’t matter how skinny or fat or pretty or whatever I am like; what matters is that I can do these super awesome things that make me feel really good.”

For Kismet Singh (‘20), “community” extends beyond roller skaters. She first started skating during birthday parties at rinks and turned the activity into a hobby for herself and a way to bond with her friends. 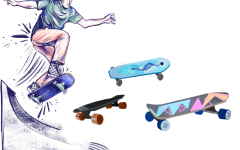 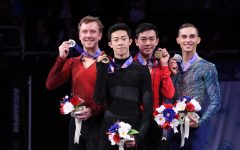 “I find that with my friends, we actually will use different means of moving around. So what I mean by that is we’ll get together and skate together; like they’ll skateboard, and I roller skate or vice versa,” Kismet said.

However, as skaters such as Peacocke have remarked, the inclusivity of the sport is sometimes lost due to the bias of social media algorithms. Most notably, they observed that the rise of skating on TikTok primarily featured conventionally attractive white women.

“I don’t know if it’s because of the algorithm or just what people were looking for, but a lot of the skaters who blew up on TikTok at the beginning of the summer, were all blonde or brunette, and there wasn’t a lot of racial diversity. There wasn’t a lot of diversity in body type,” Peacocke said. “And they all pretty much looked like cookie-cutter, conventionally attractive people, so that became an image of what [people] thought [about] roller skating.”

In light of recent events regarding racial injustice and algorithm bias, Mang reflects on the response of the roller-skating community.

This past summer, with the killing of George Floyd and consequent Black Lives Matter protests, roller skaters have taken to the streets to combat racial injustice.

“I actually went to a roller skating protest in Long Beach at the beginning of the summer, and we were carrying signs and skating the path along the city. And people knew what we were there for. People were honking at us, and they were putting up their fists and things like that, so protesting has definitely taken a face in the skating community,” Peacocke said.

Despite never having met any other skaters in person, the community I have found online and the rich history behind the sport make me incredibly proud to be teetering through the bumpy streets on my roller skates.