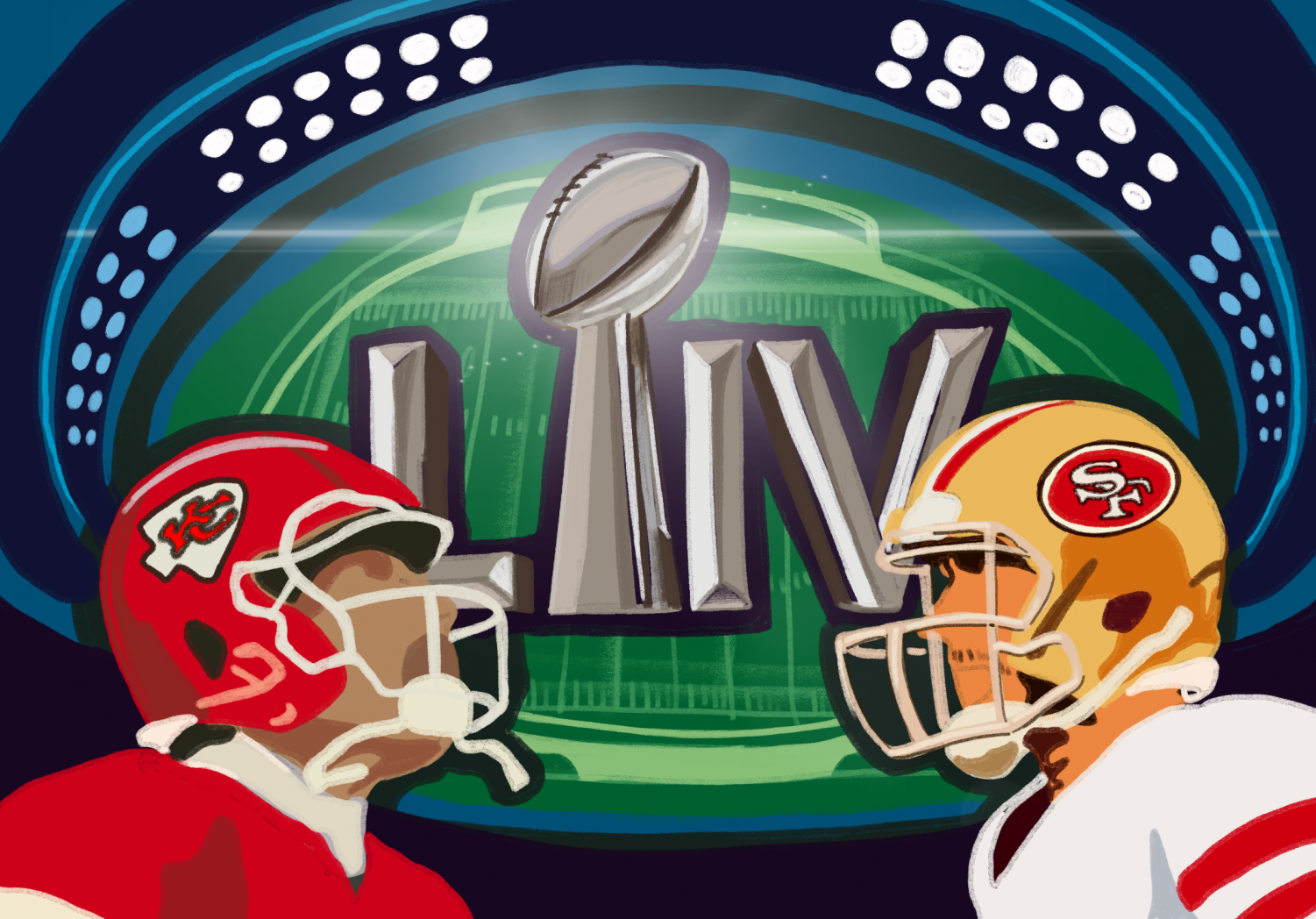 by Muthu Panchanatham and Aditya Singhvi

As the game clock wound down in the final seconds of Superbowl LIV, San Francisco 49ers fans across the nation sat dejectedly back into their chairs, in disbelief of the 31-20 score in favor of the Kansas City Chiefs displayed on the television screen. Just minutes earlier, their team had been firmly in control, leading 20-10 heading into the final quarter and aided by arguably the best defense in the National Football League (NFL).

Scoring three touchdowns in the last seven minutes, the Chiefs, led by star quarterback Patrick Mahomes, rallied back from a 10-point deficit to clinch the Vince Lombardi trophy 31-20 over a young San Francisco team coached by Kyle Shanahan with starting quarterback Jimmy Garoppolo.

Heading into the game, the Chiefs were slight favorites over the 49ers, having completed comeback wins in both their playoff games to win by more than 10 points.

San Francisco opened the scoring with a 38-yard field goal from Robbie Gould on their first drive of the game. Kansas City responded with a long touchdown drive, interception, and subsequent field goal that gave them a 10-3 lead. Jimmy Garoppolo punched back, equalizing with a 15-yard touchdown pass to fullback Kyle Juszczyk.

With the game tied 10-10 at the end of the second quarter, an impressive halftime show headlined by Shakira and Jennifer Lopez temporarily distracted viewers from the game, featuring throwback hits from both pop stars’ illustrious careers.

It was a disappointing loss, but it was a great season nonetheless. This season showed us that we have a bright future ahead. In the end, we could have been better on offense and used our offensive weapons more efficiently. ”

San Francisco came out roaring in the second half, adding a field goal and a rushing touchdown from running back Raheem Mostert to gain a comfortable 20-10 lead heading into the final quarter. Garoppolo’s offense was aided by the vaunted Niner defense, which forced Mahomes into two interceptions in the third quarter, his first picks of his postseason career.

Despite the setback, Mahomes led the comeback, scoring touchdowns on three straight drives as the Chiefs defense forced turnovers on the other end. After a touchdown pass to tight end Travis Kelce, a reception to Damien Williams, and a rush from Williams, the Chiefs gained a comfortable 31-20 lead with less than two minutes remaining. Chiefs cornerback Kendall Fuller then added a dagger interception, thoroughly squashing any lingering hopes of a San Francisco comeback. Following the game, Mahomes was awarded Superbowl MVP.

“I thought it was a great game, and it was close. I know it was heartbreaking for many 49ers fans, but [they] should be proud,” said upper school history teacher Julie Wheeler, who supports the New England Patriots. “As a Patriots fan, we have seen Kansas City play an awful lot, and you had to anticipate that Mahomes was going to do what he did what he did, because they know how to win, he’s patient and there are never enough points on the board.”

Despite the loss, 49ers fans remain confident. Last year, San Francisco went 4-12; this year, they boasted a 13-3 record and a spot in the Super Bowl. With a talented young core and the valuable experience of a Superbowl run, Shanahan’s 49ers will hope to make it back to the big game and finish what they started.

“It was a disappointing loss, but it was a great season nonetheless. This season showed us that we have a bright future ahead. In the end, we could have been better on offense and used our offensive weapons more efficiently. On defense, we got beat in crucial moments and as a result we did not get the result we wanted,” said Ishaan Mantripragada (10), a fan of the 49ers. 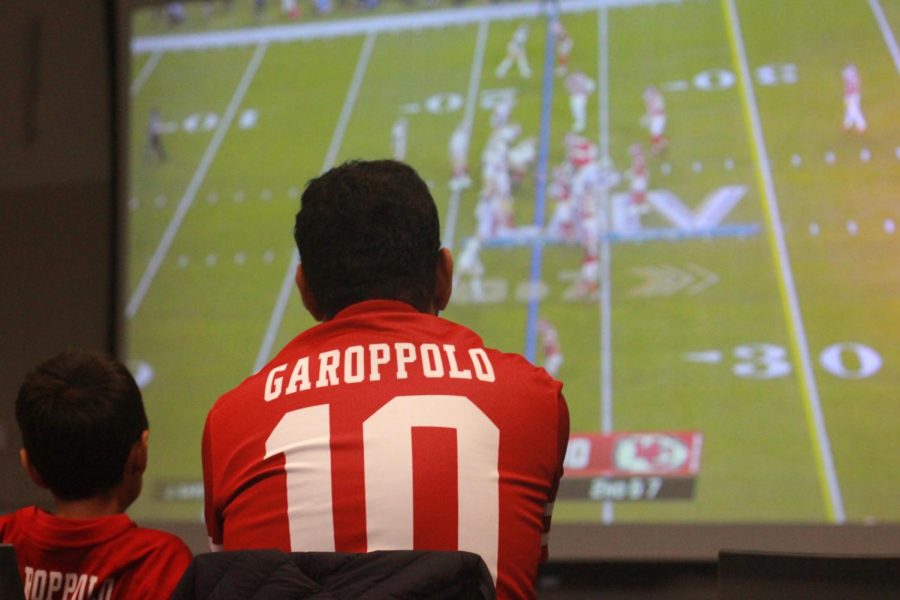 Gallery|2 Photos
Anna Vazhaeparambil
A family watches the Super Bowl LIV game at the Northside Branch Library on Sunday, where the event was livestreamed for the public to come and attend. This year's match saw the Kansas City Chiefs defeat the San Francisco 49ers 31-20. 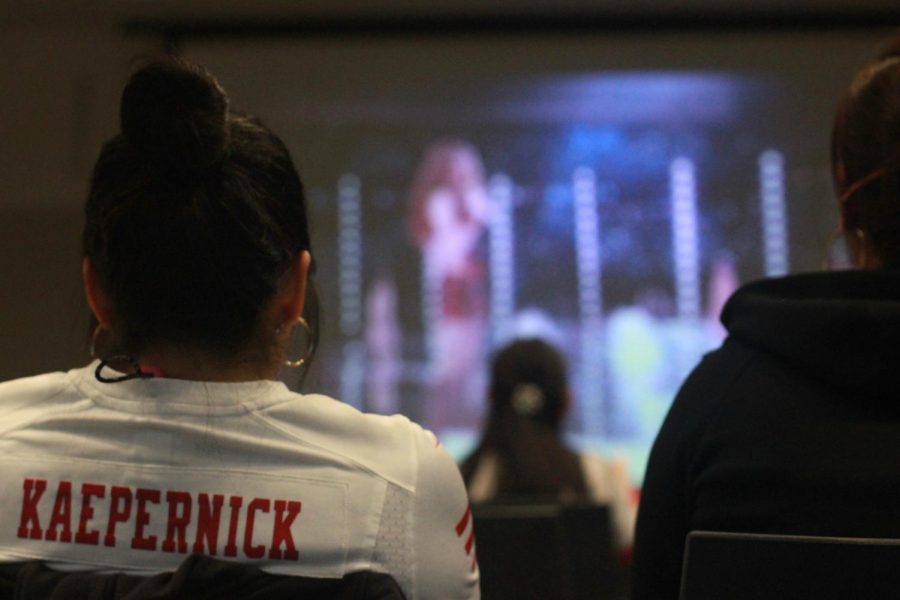 The organizer of the Super Bowl viewing party at the Northside Branch Library, Cheryl Lee, watches Shakira perform during the halftime performance.

In a stunning performance during halftime of the Super Bowl, superstars Shakira and Jennifer Lopez, accompanied by Bad Bunny and J Balvin, took over the stage in Miami, performing a compilation of throwback hits interspersed with wild dancing.

The two superstars split the 14-minute event into roughly equal segments, sharing the stage at the end for an electrifying combination.

Shakira went first, descending from a tower amidst a red sea of dancers on the circular stage and greeting the crowd with an enthusiastic “Hola Miami” that set the tone for the upcoming celebration of Latin music and culture. Shakira, 43, hails from Colombia while J-Lo, 50, was born in New York but has embraced her Puerto Rican heritage throughout her illustrious career, singing in both Spanish and English.

After performing numerous songs, including “Whenever, Wherever,” Shakira brought out guest Bad Bunny, clad in all silver to perform “I Like it.” She then crowd-surfed, singing her signature throwback single “Hips Don’t Lie,” before handing off the mic to J-Lo.

J-Lo opened standing on a spire in the middle of the stage, singing “Jenny From the Block.” She then changed effortlessly to a patterned, silver-crystal-encrusted full-body suit as she pole-danced, a skill she learned while starring in 2019 blockbuster film “Hustlers.”

To end the show, J-Lo sang with a children’s choir that included a few children in brightly lit cages, interpreted as a reference to the immigration crisis at the United States-Mexico border. She then performed “Born in the USA” wrapped in a feathery dual flag, with the United States’ stars and stripes on one side and Puerto Rico’s on the other, establishing a clear message of cultural unity. Shakira then joined her onstage, with them sharing the final spotlight to perform a mashup of Lopez’s “Let’s Get Loud” and Shakira’s “Waka Waka (This Time for Africa).”

Celebrity reactions to the show were largely positive, with many stars taking to Twitter to congratulate the two superstars. Critics also noted that the show received much better feedback than last years’ performance with Maroon5.

They really shut it down!!!! Congrats on that amazing SuperBowl Halftime Show @shakira @JLo 🔥🔥🔥 🏈 🏈🏈

As approximately 102 million fans around the world tuned in to see the matchup between two of the best teams in the NFL, businesses took full advantage of the viewership, paying $5.6 million for just 30 seconds of airtime. Some companies utilized this time better than others; here’s Harker Aquila’s ranking of the top Super Bowl advertisements, from fifth place to first.