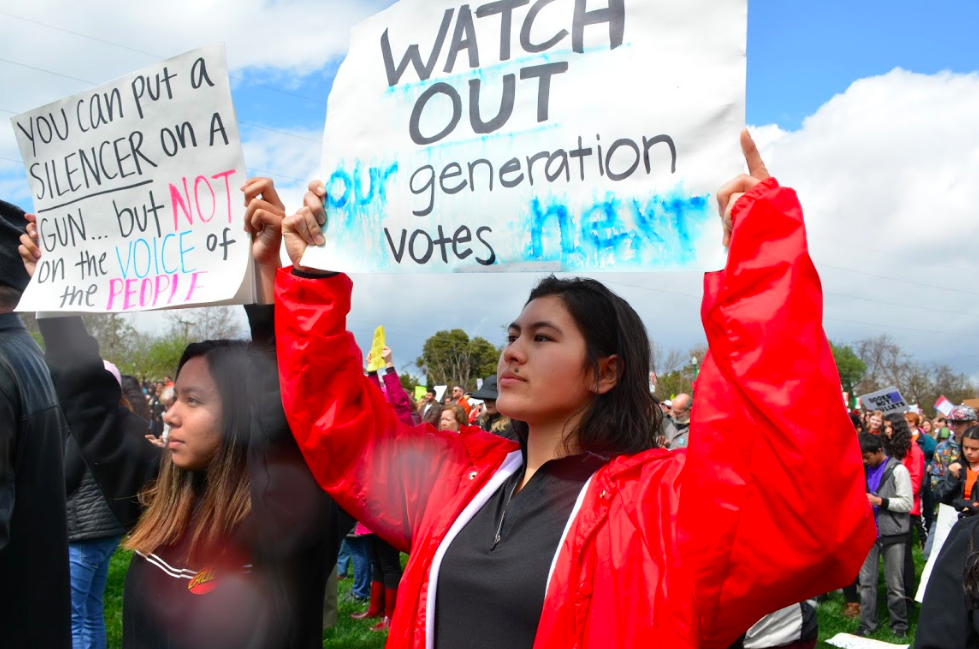 Taking it to the streets: Thousands march in youth-organized rallies for gun control legislation

“Protect lives, not guns.”
“Schools are for learning. Not for lockdowns.”

Scrawled in black and red paint, these two phrases emblazoned the posters of best friends Gemma Favaloro and Isabella Casteion from Kent Middle school in Marin County. As seventh graders, they were among the youngest activists at the March for Our Lives in San Francisco. That morning, they had urged their parents to take them to the demonstration, eager to experience a protest for the first time but even more enthusiastic to support a cause close to their hearts.

They were only twelve, but they felt for the young survivors of the Marjory Stoneman Douglas (MSD) High School shooting.

They were only twelve, but they wanted their voices to be heard, for politicians and policymakers to act upon the demands they shared with thousands of protesters.

They were only twelve, but they’d had “enough.”

Gemma and Isabella participated in just one of the more than 800 March For Our Lives protests, which took place worldwide on March 24 to rally for tighter gun control and safety measures in light of the school shooting at MSD in Parkland, Florida, that killed 17 students and faculty members last month. 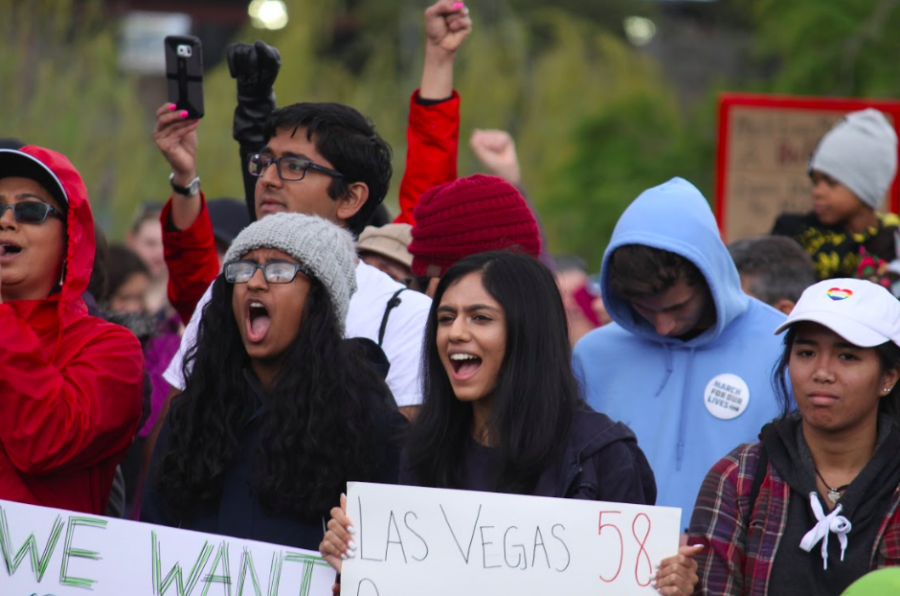 The demonstrations are part of a larger movement spearheaded by MSD students Emma González, David Hogg and several others. González and Hogg co-founded the initiative Never Again MSD, an organization committed to promoting gun control. Unlike previous efforts to enact tighter gun legislation, the revitalized movement led by these students and their allies comprises of high-schoolers.

Seeing such a big group of students caring about one singular sisue would definitely motivate Congress to take some action, hopefully, and if not, we’re all able to vote next year in the upcoming election.”

“I got really inspired by the Parkland students after the shooting, how they decided to begin their own movement, completely student-led and student-run,” said Megan Huynh (12), who is a member of the outreach committee of the March for Our Lives. “Seeing such a big group of students caring about one singular issue would definitely motivate Congress to take some action, hopefully, and if not, we’re all able to vote next year in the upcoming election.”

The leaders of the campaign spread their message across the country, organizing marches, challenging politicians, delivering speeches at rallies and speaking to national news outlets. Most recently, the MSD activists appeared on the March 23rd cover of Time Magazine alongside a single word: “Enough.”

Carrying forward the advocacy of the MSD students, high school and college students across the nation coordinated and attended marches in their respective communities. In the Bay Area, more than eight mass protests took place on March 23rd, including demonstrations in San Francisco, San Jose, Santa Rosa and Oakland. 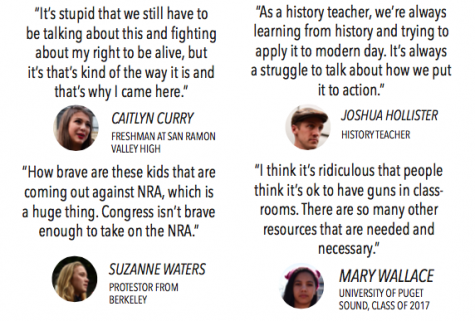 I’m never going to forget this day in my life because like the Women’s March, it means so much. I think this march is a great catalyst for social advocacy among teenagers like me that have a voice.”

Lowell high school freshman Jason Chen was the lead organizer behind March for our Lives San Francisco, and like many of the initiative’s leaders, he believes that the youth-powered activism of the movement will encourage tangible change in gun legislation.

“The Parkland students definitely inspired me to organize this march,” Chen, 14, said. “They’ve been leading students all across the nation, bringing people to show their support for the youth and for gun control.”

Over 25,000 demonstrators, many of them high-school and college students, attended the march in San Francisco alone.

“It’s an intersectional crowd–we see people from a variety of races and ethnicities, a span of socioeconomic class, and some representation of the LGBT community as well,” protester and Berkeley resident Janie Pinterits said. “We are multifaceted people, we are not single issue people, and we have to work together to be more effective in the change that we’re seeking.” 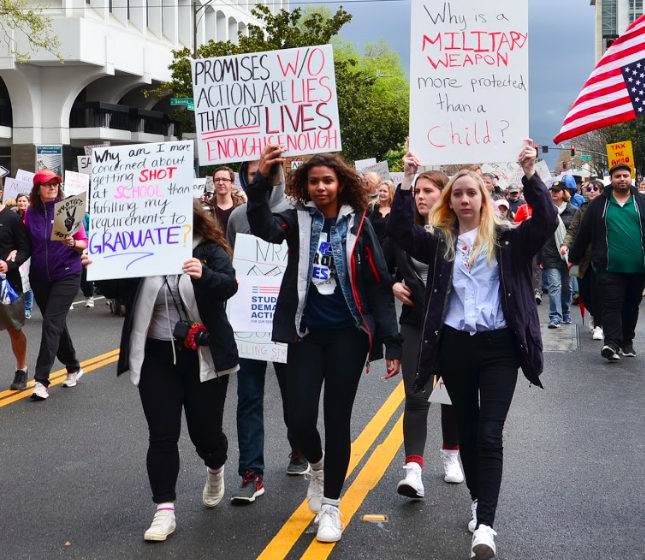 Gallery|5 Photos
Kaitlin Hsu
High school students protest at March for Our Lives San Jose on March 24, walking from San Jose City Hall to the Arena Green in the rain, along with thousands of others across the Bay Area.

The massive turnout of the San Francisco protest–as well as the thousands of people who marched in cities around the world–is due in part to social media. Users began posting #NeverAgain after the Parkland shooting to express their solidarity with the survivors and their support for gun control and turned to social media platforms to spread word about the march.

“We’re able to talk and so many people are able to listen,” Emma González said in an interview last month with the Winged Post. “It’s allowed us to stay here when in other situations, we would have been shunted off of stage because politicians don’t want to hear our voices. Now, they have to listen because we are better at Instagram and social media and Twitter and Facebook than they are.”

While the MSD students have mobilized the movement on social media, these students and their fellow activists across the nation have demanded stricter gun legislation that encompasses policies ranging from required background checks to a ban on assault rifles.

“My husband, who is in the military, says all the time about the regulation that military personnel have to use weapons,” Rachael Waters, a San Francisco march protester from El Paso, TX, said. “So, why can the general public have a firearm, a deadly weapon that they have to train and qualify in the military to use? People who are putting their second amendment before human lives are grossly missing the point of what matters. None of the amendments of the constitution should come before human life, and they need to be amended accordingly.”

This call for “common sense gun laws” has yielded action among Florida lawmakers. The Florida legislature passed the Marjory Stoneman Douglas High School Public Safety Act on March 8, which raises the minimum age requirement to purchase a firearm to 21, establishes longer waiting periods, and allocates $400 million to mental health resources and for the hiring of school resource officers. 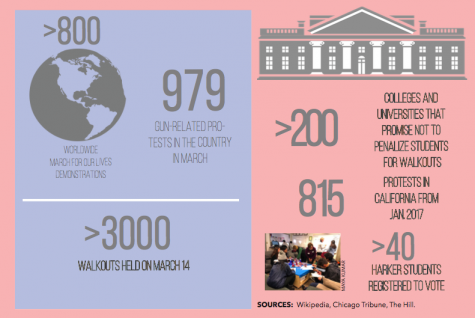 Despite the changes in Florida’s state policies, congress has yet to pass comprehensive legislation on gun control.

“We still have guns in the UK, but after a similar incident that happened in an elementary school, we really tightened our gun laws. We haven’t had any incidents since,” attendance coordinator Sue Prutton, who is from the United Kingdom and attended the San Jose march, said. “We [Americans] need to take a close look at guns. I think I’m just incredibly proud of the students for stepping up and doing what so many of us adults should really have been willing to do in the first place.”

“It is the third bill that we have written,” Feinstein said in a speech delivered at the San Francisco march. “The problem is the gun industry. They will go out, and they will support mightily people in other states that will refuse to do this. If we want a new America, if we want a one-family America, we cannot do it through guns.”

Fourteen Harker student journalists attended March for Our Lives rallies in San Jose and San Francisco to take photos at each event, interview attendees and listen to speakers. 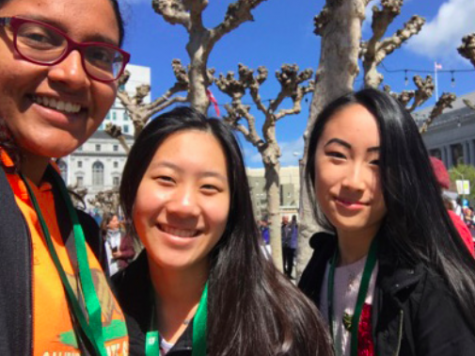 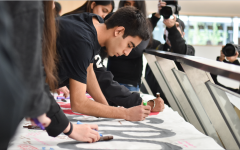 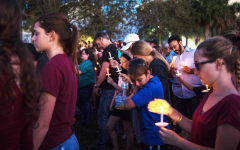 Not one more: Thousands participate in March for Our Lives protests in Bay Area 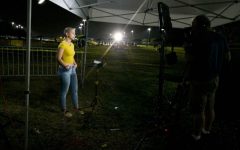 Prior to the March for Our Lives protests, the Harker community held a walkout and vigil on March 14 to commemorate and honor the lives lost in the massacre, an event hosted by various student organizations and clubs on campus. Students also had the opportunity to sign a banner for MSD, write letters to local congressmen and district representatives or purchase snacks to support the MSD community.

“I hope that [the vigil, the banner and the video] lead to a sense of love among our community. I hope it fosters a feeling of grief,” sophomore class council president Avi Gulati (10) said. “To the MSD community, I hope that they see what we’ve done and know that they’re supported. I mean, they obviously already, with so much of the efforts around the country, know that they’re supported, but so many other people doing something about it is not to say that we shouldn’t.”

Student council, Harker journalism and the speech and debate program collectively organized a session hosted by History teacher Carol Green on informed voting, a pre-registration opportunity for 16 and 17 year old students and a bipartisan debate and town hall on gun control.

“Get registered to vote, first off. Make sure you’re registered. Then, obviously, get out there and vote. Make sure you become a politically active individual by sending letters to your congressman, calling them every single day until literally any legislation has passed, and holding your elected officials accountable,” gun control activist and MSD senior David Hogg said in an interview with the Winged Post last month. “Congressmen love listening to children. Actually they don’t, they don’t care, but when they get a s***load of letters from future voters, that scares the crap out of them. So, letting them know that you’re coming for them, that’s what you need to do.”

This piece was originally published in the pages of The Winged Post on March 30, 2018.