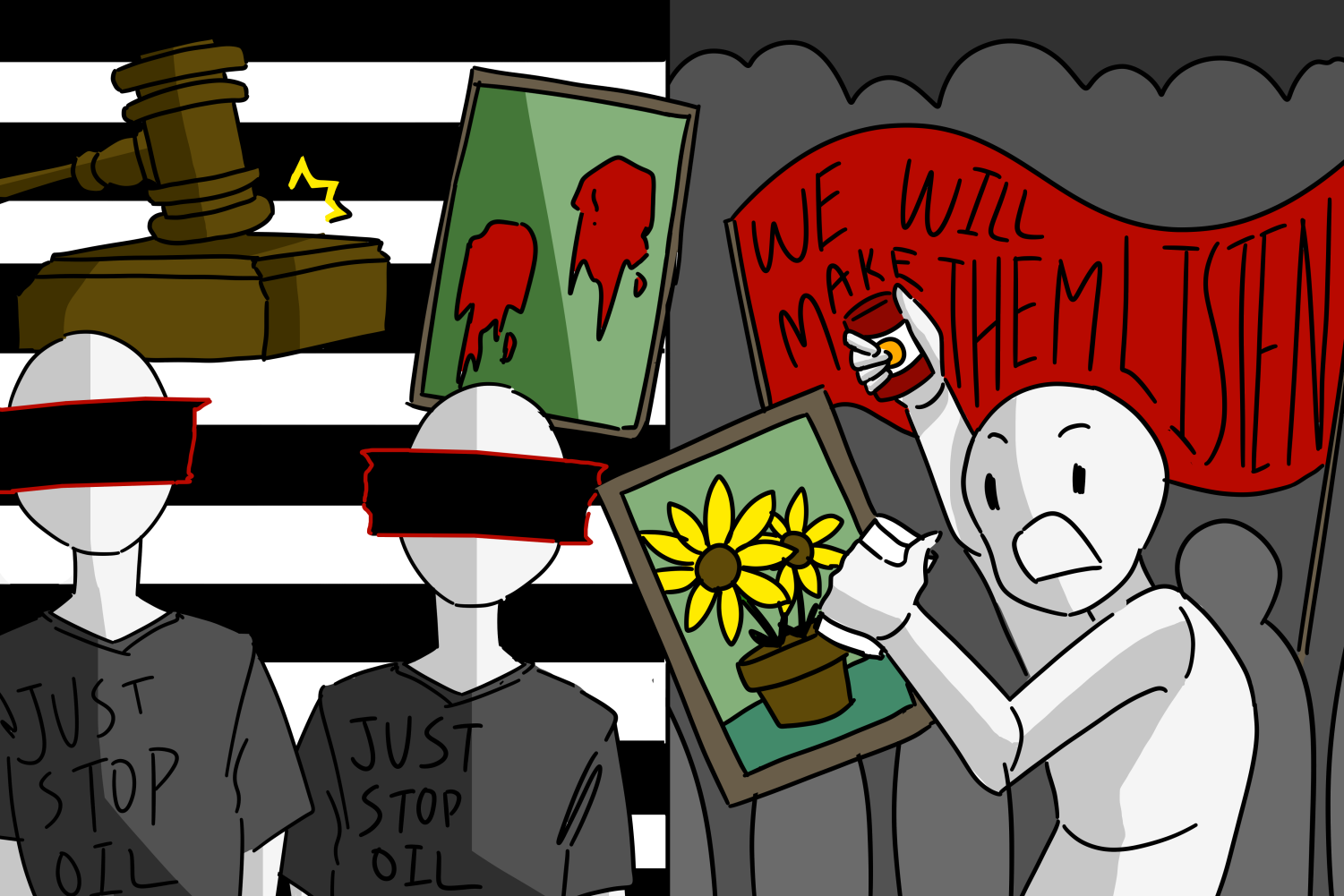 Cake thrown at the Mona Lisa, soup splashed onto Van Gogh, body parts glued next to paintings, shouts of, “What is worth more, art or life?” Such protests may or may not be necessary to draw attention to global climate change issues. (Jessica Wang)

Cake thrown at the Mona Lisa, soup splashed onto Van Gogh, body parts glued next to paintings, shouts of, “What is worth more, art or life?” Such protests may or may not be necessary to draw attention to global climate change issues.

by Ananya Sriram and Hima Thota

Climate activism should pursue the art of persuasion, not force

“Persuasion is often more effectual than force,” Greek storyteller Aesop said; “The triumph of persuasion over force is the sign of a civilized society,” American economist Mark Skousen said; “If you wish to win a man over to your ideas, first make him your friend,” 16th U.S. president Abraham Lincoln said.

Simply stated, persuasion is the force of a mind, able to shape perspectives and bring awareness without the disruptive quality of impulsive actions. Yet, activists often abandon this idea — the idea that a peaceful argument trumps civil disobedience.

Various protesters demanding action regarding climate change carried out stunts across the world by throwing food and attacking pieces of widely recognized art. Climate activists in Germany threw mashed potatoes on French Impressionist painter Claude Monet’s “Grainstacks,” one of 25 paintings he made around 1890. Similarly, London protestors drew attention for throwing cans of tomato soup on Vincent Van Gogh’s “Vase with Fifteen Sunflowers,” just one of the six Sunflower paintings that survive today. Other attacks also joined the series of stunts: gluing to Leonardo da Vinci’s “The Last Supper”, Gustav Klimt’s “Death and Life” and John Constable’s “The Hay Wain.

According to climate activists, many of the attacked pieces depict natural landscapes that will be harmed by the disruption of climate change. The activists aren’t wrong: the Maldives, Fiji Islands and Samoa are at risk of disappearing, glaciers around the world are receding at faster rates than in the past decade and regions of the Thames River in South London could be regularly flooded by 2030. Their intention to bring awareness to the climate and financial crisis caused by excessive fossil fuel extraction bears significance in the context that extracting fossil fuels consumes $220 billion on average each year.

We should turn to conversation with lawmakers and increase discussion to pass legislation. While the process may not be easy, it preserves both our environment and culture; that way, like Aesop said, we can truly make a change. ”

Nevertheless, recognizing climate change and altering laws solely due to civil disobedience is encouragement for these activists: drastic actions are the only way to garner attention. Yet, there are more peaceful forms of activism. Greta Thunberg became well-known after leaving school to pressure the Swedish government to meet established carbon emissions targets. What distinguishes Thunberg and stunt-performing activists is that vandalism is not only disrespectful, it deflects supporters of the climate movement. Contrastingly, Thunberg’s actions serve as an example of activism that inspires change without force.

On the other hand, the work of these activists establishes that in the name of climate action, attacking pieces of significant cultural heritage is justifiable. While throwing food at paintings will not “kill us” while “Climate change will,” it demolishes important keys of our history. Cultural heritage brings a sense of unity within groups of people by spreading an understanding of their ancestry. And although the paintings in the museums were not actually damaged due to a glass covering, activists in general serve as a model for advocacy on issues facing the globe. The actions of Just Stop Oil or Last Generation Austria now influence the activism of new generations advocating for climate change. No paintings have been damaged yet, but recurring events have sparked a fire, one that is bound to burn a piece of the vast cultural assets in history.

Opposing the goal of the climate change movement, the protests also sparked harsher anti-protest laws. In Britain, lawmakers are considering a new legislation that penalizes protesters who lock themselves onto construction sites or other places of business with six months in prison and unlimited fines. In Australia, a new law from April imposes a maximum fine of $15,000 and the possibility of serving up to two years in jail on these protestors. And while protest is a right, civil disobedience often aggravates the state of protest laws by causing disruptions that can have a negative economic impact or jeopardize lives. According to the Radical Flank Effect, civil disobedience can often be counterproductive by reducing public favor for a movement.

So what should be the response to these climate activists’ actions? Encouraging these forms of protest over non-disruptive protests or giving them further attention induces a series of events that establish that civil disobedience is the default form of protest. Instead, we should turn to conversation with lawmakers and increase discussion to pass legislation. While the process may not be easy, it preserves both our environment and culture; that way, like Aesop said, we can truly make a change.

Cause is more significant than action in climate activism

Cake thrown at the Mona Lisa, soup splashed onto Van Gogh, body parts glued next to paintings, shouts of, “What is worth more, art or life?” — all acts of protests by climate activists captured in global headlines in recent months. This year alone, more than two dozen acts of protest have occurred since May, with attacks on prominent art pieces, such as Van Gogh and Leonardo da Vinci gaining attention.

Over the years, the climate crisis has been the recipient of greater focus and attention in global news. Prominent personalities from climate activist Greta Thunberg to actor Leonardo DiCaprio have taken on the role of warning the public of the impending doom that the worsening climate crisis is bound to bring, and science cautions us of the fact that we have less than ten years before the world reaches a global temperature that will be irreversible.

However, climate activism has reached new heights. Climate activists and organizations have increased the intensity of their public displays for awareness, and as of late, these displays are attacks on valued pieces of artworks. Little to no damage is usually seen on these pieces due to the placement of protective glass, but the intention of the acts themselves have appalled many.

The disregard for these prized artworks shown by these activists has many asking one major question: Why do they do it?

In the eyes of these activists, there is no reason to respect artistic masterpieces when in a few decades, the climate crisis will worsen to the point where food security will decrease. In their public demonstrations, they present the fight for climate change reform as a very black and white question: Is protecting paintings and history more important than protecting our planet? This simplified view has spurred these activists to engage in disruptive protests in art museums this past year.

We should discourage those that are disruptive when promoting their cause, but we should also look at the intention behind actions. In the end, every one of us can always take the extra step to look past the wrongs and into the why–genuine reason can always lie behind public appearance.”

I have no issue with climate change activism — I myself believe that it is a real and pressing issue. I also believe that actions matter, and that basing an opinion of a cause based upon the action is understandable. However, people should pay more attention to the intention and cause behind the action. We should focus more on the why, and not the what. Although the actions of these activists are callous and disruptive, these activists are trying to bring more awareness to the climate crisis. The public also shoulders some blame for offering no second thought towards the motivation behind their actions, instead offering derisive criticism. Taking to Twitter, James Cleverly, British Foreign Secretary, summed up the general public sentiment, tweeting, “Let’s stop giving these attention seeking adult-toddlers the coverage they clearly crave.”

The issue with the protests of these climate activists is their decision to participate in disruptive acts by attacking historic artwork and making art a target of their cause. Public demonstrations should be done to draw people in to learn more, not turn them away from the organization, and in the process, the cause. However, actions do not necessarily reflect intention. Behind all the protests and public demonstrations, there is a legitimate and pressing cause. Many of the protests have been carried out by supporters of the European coalition Just Stop Oil, which firmly advocates for ending the use and production of fossil fuels in the U.K. The use of fossil fuels is a driving force behind climate change today, but even today, very few realize the implications that the continued use of it will have. The call for climate reform that these protestors represent has a globally widespread impact, and although these protestors should protest in less volatile manners, this is where the public can reconsider their opinions by looking into the why.

Looking into the why, and not the what, can provide a different perspective and questions in regard to these protests. What was the reason? What is the purpose and belief of this organization? Is it relevant? All these questions go unanswered, and instead, only the action itself is often picked apart. This is a cycle that can be applied to many extreme acts, but especially here. Although awareness was raised in a disorderly way, we should spend more time paying attention to the cause that motivated the disruption.

Were the activists justified in their actions? No. However, are the beliefs that they are supporting valid? Yes. We should discourage those that are disruptive when promoting their cause, but we should also look at the intention behind actions. In the end, every one of us can always take the extra step to look past the wrongs and into the why — genuine reason can always lie behind public appearance.