Jessica Tang (11) throws a ball at the senior team during their dodgeball game. The seniors ultimately defeated the juniors.

Upper school students competed in the annual dodgeball competition finals and dressed up in class themes for Thursday’s spirit celebration.

The dodgeball competition took place during lunch in the Athletic Center, with the freshmen versus sophomores match at 11:20 a.m. followed by the juniors versus seniors at 11:40 a.m. The freshmen and senior teams won 8-4 and 10-0, respectively.

First, the freshmen played against the sophomores in a close match, with both teams steadily eliminating players until the time ran out. The freshman team won with eight remaining players, beating the sophomores’ four players left in the game.

Participant Om Tandon (10) felt that even though the sophomores lost, they still enjoyed the game as a team.

“The outcome wasn’t what we wanted, but the best part is that we had the most fun in the teams, so that’s why I’d say it was a win in our hearts,” Om said.

Next up, the juniors faced the seniors, backed by enthusiastic cheers and chants from their classmates. The seniors dominated the game by strategically launching multiple balls at the same time, wiping out most of the juniors in minutes and leaving Atri Banerjee as the last junior player standing. Cheered on by his classmates on the bleachers and sidelines, he dodged hits from the remaining seniors for over 30 seconds before Aaditya Gulati (12) eliminated him with six seconds left in the game.

“It was kind of intimidating because there were [eight] seniors on the other side all throwing at me at the same time, but it was also fun because I’m friends with some of the seniors, so it was fun to see them after the game and talk about it,” Atri said.

Each team began with 20 players and had 10 minutes to knock out as many opposing players as possible by hitting them with balls. Players could also catch balls thrown at them, restoring a player to their team while eliminating the player who threw the ball. Teams could win either by eliminating all the opposing players or by having the most players when the time ran out. Director of Student Organizations and Assistant Upper School Activities Coordinator Eric Kallbrier oversaw and commentated the games along with students and faculty who volunteered as referees. 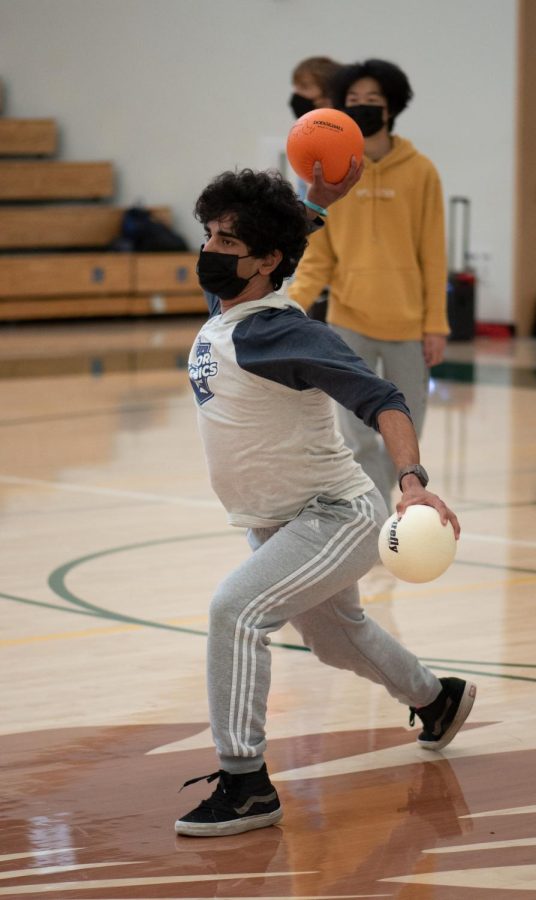 Gallery|5 Photos
Carter Chadwick
Rajas Apte (9) lunges forward to throw a ball during the dodgeball game between the freshmen and sophomores in the Athletic Center. The freshmen won 8-4.

“Coming back from Spring Break, a lot of us definitely were not as excited to come back to school, but spirit week definitely was able to lighten the mood,” Student Activities Board (SAB) member Ella Lan (10) said. “Spirit week in general is a team bonding experience, so I enjoyed it.”