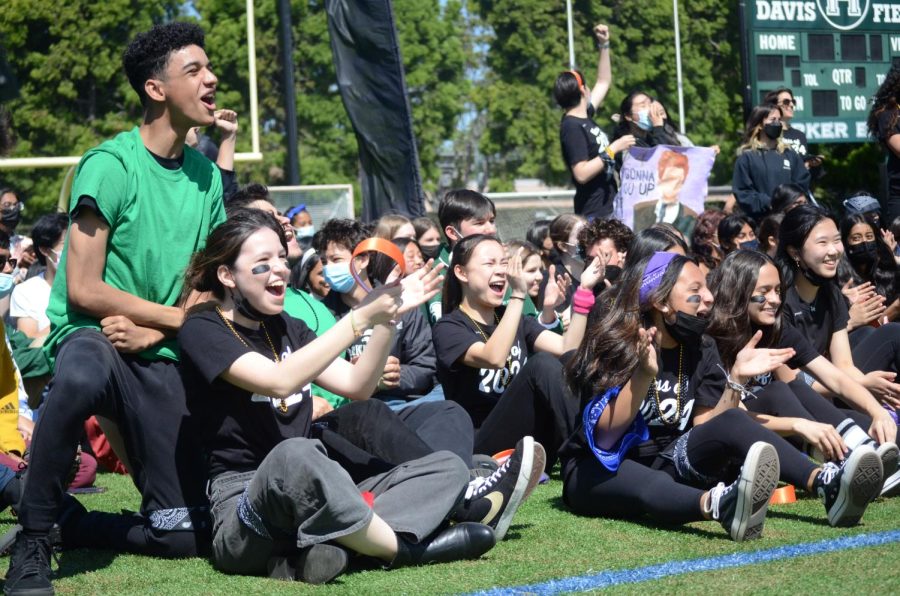 The sophomore class cheers for Student Activities Board (SAB) sophomore representative Daniel Lin in the final round of Musical Chairs on Davis Field on Friday. Freshman SAB representative Jason Shim won the game.

The junior class won this year’s spring Spirit Week, knocking out all classes in the rally day games and the class dance after beginning the day in a neck-to-neck tie for points with the senior class.

HSLT commenced the event with a game of musical chairs, in which all Student Activities Board (SAB) representatives and volunteers from Student Council participated, while tunes ranging from “Ghostbusters” to the theme song from “My Little Pony” blasted from the surrounding speakers, with the number of chairs decreasing each subsequent round. After defeating Sujith Pakala (12), student council representatives Jason Shim (9) and Daniel Lin (10) advanced to the final round. Jason edged out Daniel for the victory after a redo final round as it was uncertain who sat in the chair first. Afterward, the cheerleading squad performed a short routine to a remix including songs “Shivers,” “Fast (Motion)” and “Cold Heart.”

A team of 32 freshmen then took the field to perform a prepared routine for the dance competition. With choreography by freshmen Maya Affaki, Sonia Yu and Yasmin Sudarsanam and to their freshmen class theme of TV villains, they danced to “There’s a Platypus Controlling Me,” “It’s the Count,” “Where’s the Lamb Sauce?” and “Agatha All Along.” Then, the sophomores danced to “Ben 10,” “Teen Titans,” “Teenage Mutant Ninja Turtles” and “Call Me, Beep Me!” for their TV-hero-themed routine choreographed by sophomores Luke Mehta, Kuga Pence, Kai Stinson and Selina Chen.

“I like seeing how our choreography looks with the whole group involved,” Yasmin said. “Since we [initially] choreographed it with just the three of us, it’s interesting to see how it looks on them and then changing some things based on that.”

The four class deans—freshman class dean Jeffrey Draper, sophomore class dean Carol Green, junior class dean Karl Kuehn and senior class dean Christopher Hurshman—joined on the field for a game of “Ball Bopping With the Deans.” Each of the deans competed to gather 22 balls in a designated bucket their respective class colors, white, black, yellow and green, from an inflatable pit in the middle of the field. To prevent other classes from winning, the deans could sabotage each other by dropping non-class color balls into the bucket, resulting in point deductions for the sabotaged class’ ball bopping score. Kuehn finished first, sitting on his bucket to prevent the other teachers from sabotaging him. 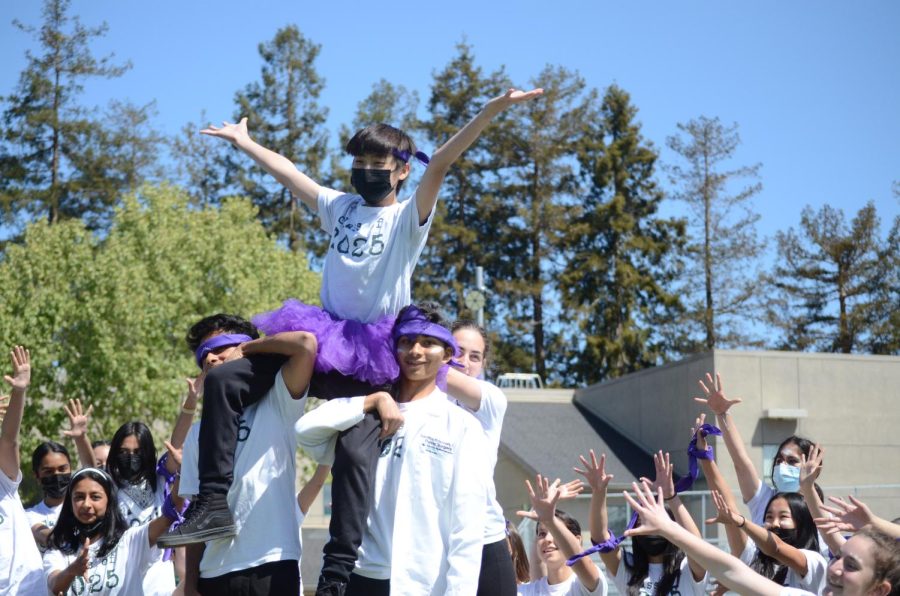 Gallery|5 Photos
Kinnera Mulam
Arthur Wu (9) raises his arms in the air for the final pose of the freshmen's dance routine on Friday on Davis Field. The freshmen came in last in the competition.

Ultimately, after reviewing video footage of the competition, HSLT split the points evenly among the four classes. Following the activity, upper school boys dance team Kinetic Krew performed a routine choreographed by dance teacher Rachelle Haun to “Get Low” and “How Low.”

In the second game, teams from each grade participated in a chariot race. Two team members raced two laps while dragging a third on a sleeping bag from one end of the field to the other. The juniors came in first with a wide lead, followed by the seniors, sophomores and then the freshmen.

A group of juniors then performed their routine to “Bad Romance,” “Toxic” and “I Did Something Bad,” choreographed by juniors Nupur Gupta, Eileen Ma, BB Ajlouny, Anja Ree and Nicholas Delfino. After, senior choreographers Kai Due, Irene Yuan, Brandon Park, Sujith Pakala and Nikki Kapadia danced with others from their grade to “22,” “Confident,” “Swan Song” and “What’s Up Danger.” HSLT announced that the juniors clinched another victory for the dance competition followed by sophomores, seniors and freshmen.

“As freshmen, we were preparing for our freshman spirit rally, and then COVID-19 happened, and it got cut off prematurely,” Anja said. “That was a huge upset to us because it got cut off two weeks before the rally was supposed to happen, so doing so well and taking that for our class felt really rewarding.” 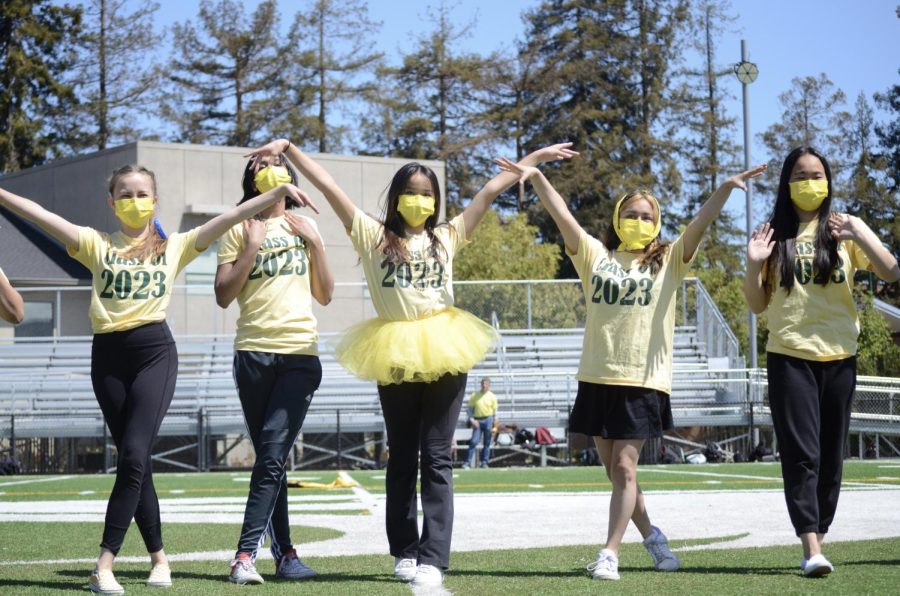 As HSLT tallied up the spirit points for each of the classes, they acknowledged Upper School Head Butch Keller and upper school math teacher Jane Keller’s importance to the Harker community. They announced that they would create a gratitude video for the Kellers featuring people from the four classes as well as a compilation of inspirational quotes, a favorite of Mr. Keller.

“Mr. and Mrs. Keller are very important to us, and they are the actual heroes of this school,” HSLT President Alysa Suleiman (12) said in the rally.

Next, Director of Student Organizations Eric Kallbrier announced the winner of the Remote Faculty/Staff Spirit of Spirit award, given to the teacher each year who came out to spirit events and Harker activities. Due to the pandemic, no one has received the award in two years, and the names of past winners are etched on it. Golf coach Ie-chen Cheng won the trophy for showing spirit during online learning.

“This award [goes to] someone who encapsulates everything our school stands for and really champions all the activities that you guys do, that comes out to spirit events and other events like performing arts and sports events,” Director of Student Organizations Eric Kallbrier said during the rally. “[Cheng] really stepped up to engage with you all during remote learning.”

HSLT members nominate and vote for faculty members to win the Faculty/Staff Spirit of Spirit Award, last awarded to Assistant Athletic Director Alfredo Alves. Etched on the trophy, which remained in the Athletic Center for two years due to the pandemic, are the names of all past faculty winners. This year, Cheng and Director of Learning, Innovation and Design Diane Main, who won the award for the 2021-2022 school year, will be added to that list. 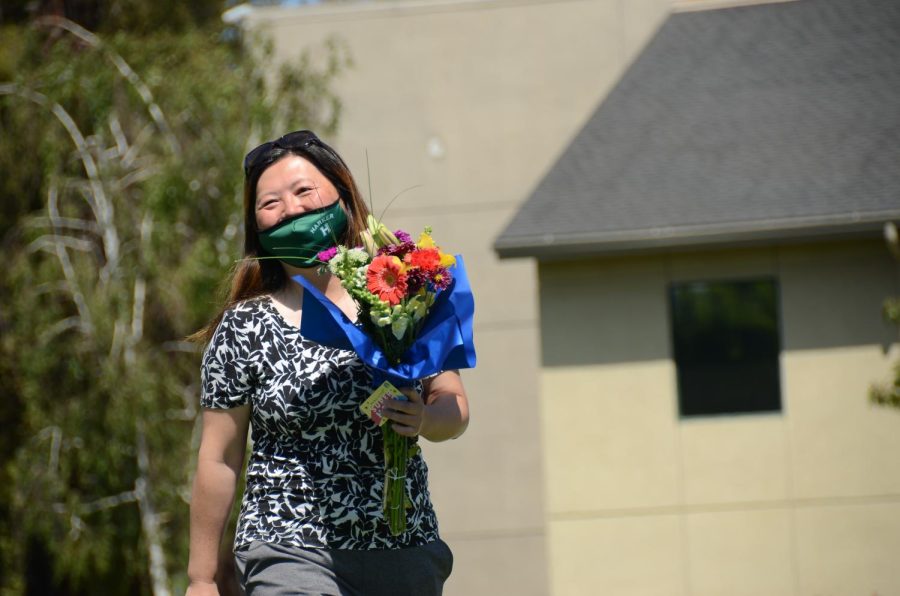 Gallery|4 Photos
Ananya Sriram
Upper school golf coach Ie-chen Cheng holds a bouquet of flowers and walks across the field after receiving the Spirit of Spirit award for 2020 to 2021 during the spirit rally on Friday. Coach Cheng received the award for attending multiple online spirit events during remote learning.

Main, who felt “honored and humbled” by the award, recognizes the spirit students have shown throughout high school during not only rallies but also events such as Quadchella and Hoscars.

“It’s sort of organic and grassroots and comes from the students themselves wanting to do a thing because it means they’ve really channeled their passion into something they want to share,” Main said. “These [events] are not required; they are just ‘I want to do this.’ That’s a big part of what high school is about to me.”

“I am truly proud of our junior class,” Kuehn said. “They worked so hard. The amount of energy and effort that goes into the spirit events does not go unrecognized. I’m just the one that gets to hold this trophy, but they earned it.” 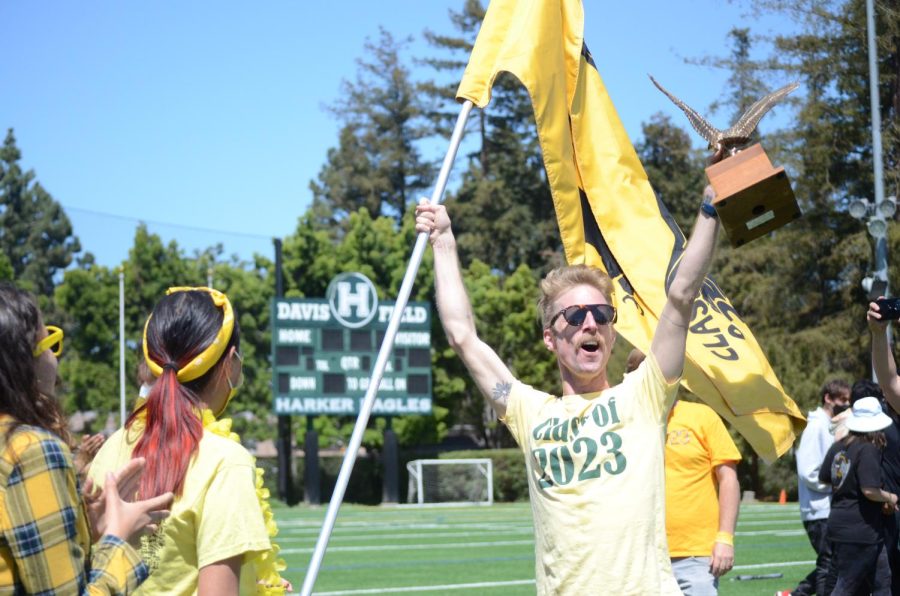 Gallery|3 Photos
Kinnera Mulam
Upper school dance teacher and junior class dean Karl Kuehn cheers while holding the Golden Eagle Trophy. "The amount of energy and effort that goes into the spirit events does not go unrecognized," Kuehn said. "I'm just the one that gets to hold this trophy, but they earned it.”

Anja attributed the junior student council and SAB members’ organization and contagious willingness to embrace spirit events to their victory.

“Our class council and SAB helped a ton with organizing our class dance,” Anja said. “Our junior members of HSLT and SAB are some of the most spirited people at this school. In general, it’s kind of like a chain reaction. If you have a section of your class that’s willing to dress up [or] cheer, it’s really easy for that energy to spread to the whole group.”

Even though the sophomores came in third place overall, HSLT community events member and class dance participant Anish Jain (10) commends the improvement his classmates have made with organization regarding spirit events.

“I’m really proud of us for all the effort we put into the dancing this entire week,” Anish said. “I think we were more organized, and it was well put together. And I know we’ve had a lot of people dressed up, too. We’ve done a great job, and I hope we continue [to do so] next year.”

“Once you get to a specific point [in high school], you just feel in touch with the class in its entirety,” Arvin said. “That’s what spirit is. When you start cheering, you don’t feel any discomfort or like awkwardness amongst you guys. [My] advice [to underclassmen] is to find that connection with other people. Expand your networks. Get out there.”

The rally was the last major spirit event of the year and the last chance for classes to win spirit points, but HSLT has plans for small community events as the year comes to a close.