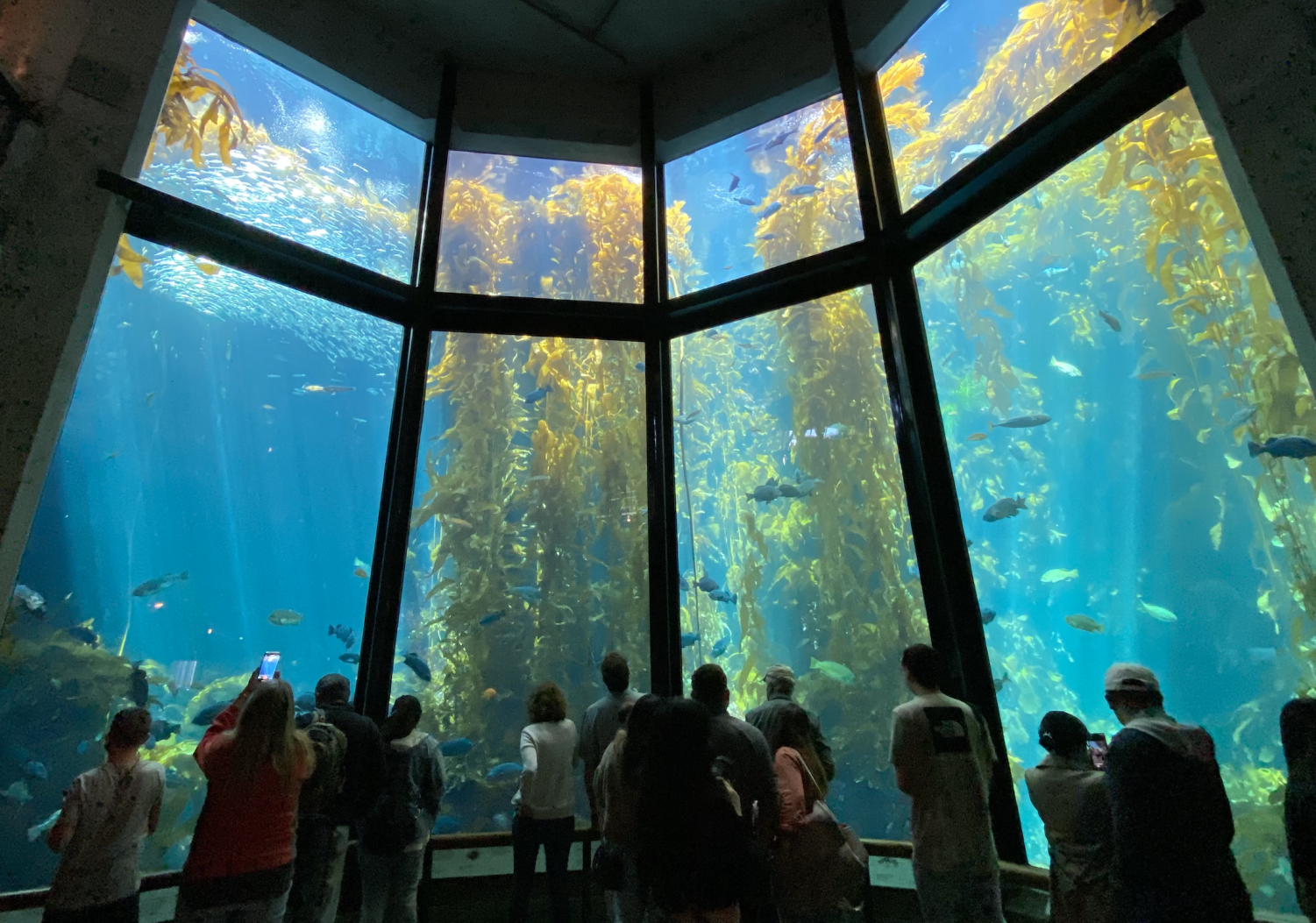 Monterey Bay Aquarium visitors watch native species, including the giant kelp, in one of the establishment’s exhibitions. The aquarium protects marine species by providing information about climate change and maintaining research and surrogacy programs. (Alysa Suleiman)

Monterey Bay Aquarium visitors watch native species, including the giant kelp, in one of the establishment’s exhibitions. The aquarium protects marine species by providing information about climate change and maintaining research and surrogacy programs.

Global Reset: In a world of warming oceans, what does a sanctuary provide?

by Sabrina Zhu and Alysa Suleiman

560 billion tons of CO2 absorbed. A 30% increase in the acidity of surface waters. A roughly 50 times faster rate of change in oceanic pH. 5652 marine species classified as threatened. This is the damage our waters have sustained in the last 250 years. Yet, nestled within the towering coastal oaks and cypress trees and the frigid Northern Californian waters of Monterey Bay, a community of environmentalists housed at the Monterey Bay Aquarium strives to provide an ocean sanctuary and inspire ocean conservation.

Punch your ticket in and walk through the glass entrance doors to the Ocean’s Edge, and a grand, two-story exhibit greets you, featuring the flashing flippers and nimble choreography of the aquarium’s beloved sea otters. From the second floor, step out towards the balcony overlooking the Great Tide Pool and the Monterey Bay before turning left to visit the touch pools. Aquarium visitors submerge their hands into the cool water full of prickly purple sea urchins, slimy wet kelp and coral starfish and ask questions to the volunteers monitoring the pools.

“It’s a place that I enjoy,” said Laurie Dixon, a volunteer at the aquarium. “I enjoy coming here and visiting as a member, and now I’m giving back, so to speak.”

The aquarium also houses its signature kelp forest, a towering conglomeration of undulating giants, waving to and fro beneath rare sheaths of sunlight that pierce the water’s surface from above. At 28 feet tall, the Kelp Forest exhibit is one of the tallest in the world. Kelp forests are native to the Pacific coast and grow from Alaska to Baja, California, and their existence is crucial as a foundational species, or primary producers that create a suitable habitat for a great diversity of species in an environment.

Not only do they provide an abundant and continuous source of food for snails, abalones, sea urchins and more, but their decomposed form, known as detritus, also becomes resources for deposit-feeders such as sea cucumbers, which in turn fuel the greater marine food web. The kelp tangles also prevent animals from drifting away. Otters, which sleep in the ocean, wrap themselves in the areas of the kelp fronds near the surface in order to stay in place. Under healthy conditions, the ecosystem thrives, with kelp able to grow up to two feet every day.

The Monterey Bay Aquarium opened in 1984 and serves as a public locus of education on the marine ecosystems in Monterey Bay. The aquarium holds ten permanent exhibits and plans on opening a special exhibition, Into the Deep, next year. Within these displays, there are a total of 207 animal species: 19 birds, 70 fishes, 78 invertebrates, and 14 marine mammals. As of 2016, 1.8 million people visit the aquarium every year.

60-year-old Timothy Treadwell is a regular visitor of the aquarium, and he enjoys bringing his family to not only appreciate the beauty of the exhibits together, but to learn and get a realistic view of what the local oceans are like.

“It really is a great special place,” Treadwell said. “You have people that are in tune with it and you have people that have no clue, so it’s a great tool to wake people up and get an awareness going in their minds of what’s in the ocean and what mankind is doing to it, whether it’s overfishing or the garbage that’s been dumped in the ocean.”

Treadwell feels especially concerned about the unsustainable seafood market, in which practices such as overfishing or illegal fishing leaves populations unable to recover fast enough, or at all. Currently, 90% of fish populations are reaped beyond sustainable limits and 26 million tons of fish have disappeared due to illegal, underreported or unregulated (IUU) fishing. Unsustainable fishing practices harm both coastal ecosystems and the local fishing economy.

“We’re still discovering species in the ocean, [so] why wouldn’t it be a sensitive situation that we should be very attentive to as opposed to just continuing to take from the ocean?” Treadwell said. “There’s always a void left behind, and it’s important to try to not disturb that life cycle.”

The ecosystems featured in the aquarium are found in the Monterey Bay National Marine Sanctuary (MBNMS). This sanctuary was designated in 2012 to be a protected area along California’s coast and includes regions of the Bay Area. It covers a total of 2,096 square miles of the Pacific Ocean, running along 276 miles of shoreline, with its southernmost point in Cambria and its northernmost point in Marin.

In addition to kelp forests and otters, people have seen whales, dolphins and seals in the MBNMS, totalling 36 mammal species. Scientists have tracked 525 species of fishes and 180 of seabirds.

Increasing damage left by climate change now harms MBNMS and its ecosystems. Carbon dioxide, released into the atmosphere from emissions, increases ocean acidification levels. Now, the ocean is already 30% more acidic than it was before the burning of fossil fuels popularized. And when waters acidify rapidly and at unprecedented speeds, species may experience sharp declines in populations or even go entirely extinct.

Furthermore, ocean warming has increased up to 0.14 degrees Fahrenheit per decade over the past century. Our seas absorb 90% of the heat caused by global warming and greenhouse gas emissions. Marine species now face new challenges, as the warm oceans threaten the balance of ecosystems and augment the risk of extreme weather disasters. As of 2020, 5652 marine species were considered threatened, with 300 categorized as critically endangered. Additionally, animals require more oxygen in hotter temperatures, since their metabolism will act faster; however, warm waters are less able to store oxygen.

“In terms of being warmer, [there may be] some [changed] migration in species that are trying to find more of those cooler waters. Those could be animals traveling further up north in ranges that they’re not used to being in before,” Monterey Bay Aquarium sustainability manager Claudia Tibbs said. “We’re seeing some changes in juvenile white sharks and where they’re being found. That also can be seen in changes where seaweed can be found.”

In order to combat the effects of climate change, the Monterey Bay aquarium provides information related to sustainable seafood, plastic pollution, and climate change. Their Ocean Memory Lab collects data on wildlife species and analyzes the best way to restore ecosystems. Additionally, they have a surrogacy program, which matches non-releasable otter females and pups, and they estimate about half of the recent Elkhorn Slough’s otter population growth results from their efforts. The aquarium also speaks with state officials about legislation that can protect the oceans, urging the public to use carbon-free electricity and to avoid offshore oil development. According to Tibbs, the aquarium, since 2017, has been committed to formalizing a sustainability program along with their already existing mission at the aquarium to reduce the sources of ocean plastic pollution.

“As we know, plastic is derived from petroleum. That does contribute to greenhouse gas emissions, so being able to reduce those sources does directly impact climate change,” Tibbs said. “We’ve also been working to advance action to address the causes of climate change and ocean acidification and their impacts on ocean health.”

At Harker, the upper school offers Marine Biology as a semester elective, in which students learn about marine ecosystems and life as well as the threat of climate change and the effects of ocean acidification. At the end of the semester, then upper school marine biology elective teacher Dr. Kate Schafer took students to visit the Monterey Bay Aquarium, an educational opportunity that stuck deeply with then sophomore Gianna “Gigi” Chan (12).

“We really learned how it affects every little thing,” Gigi said. “I think the aquarium has a lot of really great resources to offer about climate change and ocean acidification. The exhibit on fishing sustainability especially made me more conscious of my daily habits and how it was affecting marine life.”

After one year break, the upper school also relaunched the Marine Biology club this year. Aware of the challenges the Monterey Bay and its wildlife face, the club hopes to hold lectures about marine species, including ones native to California and plan to host beach cleanups to help protect the oceans. Additionally, the club encourages students and community members to take certain steps to protect Monterey Bay.

“Definitely watch what you’re eating, where it’s from, especially seafood. In addition, even at Harker, [clean] up trash you see on the ground, because, even if you don’t think about it, that can get in a storm drain and flow out straight to the bay,” Marine Bio club co-president Nika Lebedev (11) said.