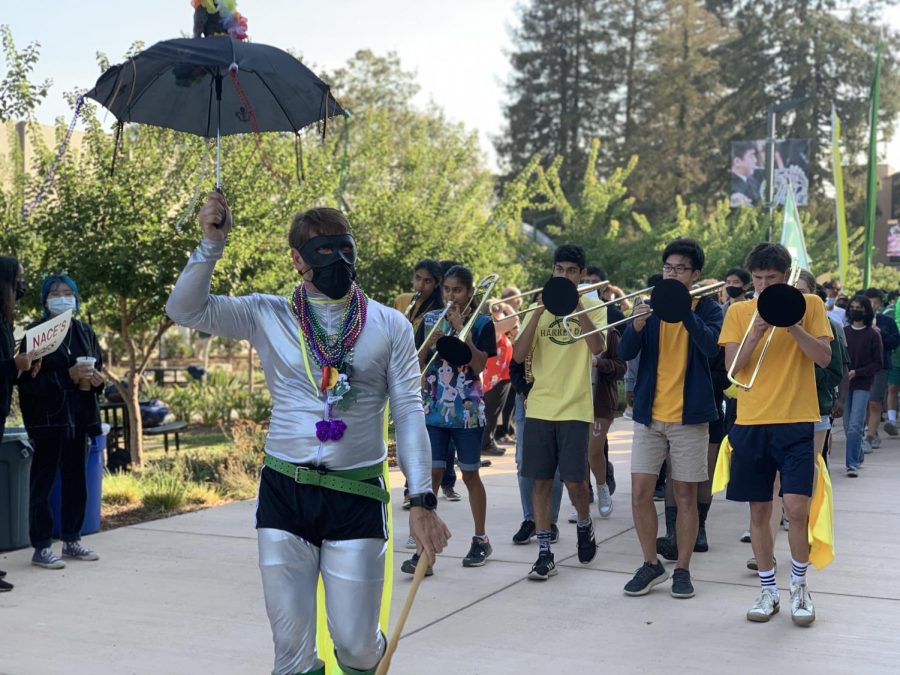 by Desiree Luo and Ananya Sriram

Spirit week activities continued with students and faculty participating in the annual parade and tug-of-war preliminary rounds, in which the freshmen and seniors pulled their way to victory over the juniors and sophomores, respectively, at Davis Field yesterday morning.

Both events were organized by the Harker Spirit Leadership Team (HSLT) and the Student Activities Board (SAB).

The freshman, sophomore, junior and senior classes decked themselves in their class colors for the events: white, black, yellow and green, respectively. Students donned accessories such as tutus, stickers, headbands and colorful face paint to embellish their outfits and display their class pride.

Prior to the parade, each advisory selected one representative to flaunt their spirited fashion on behalf of the group. Kylie Anderson (9), who marched in her first parade, dressed up in a white inflatable unicorn suit.

“[The costume is] something different — it’s white, and it’s fun,” Kylie said. “The freshmen had a lot of spirit this year.”

Members of the upper school Lab and Jazz Bands led the parade procession while playing “The Saints Go Marching In” and “Second Line,” followed by senior, junior, sophomore and lastly freshmen advisory representatives. The parade passed the senior and junior classes near Dobbins hall and finally the sophomore and freshman classes near Zhang Gymnasium.

“[I was an advisory representative], because I remember in freshman year, I didn’t do it, and I missed out,” KJ Williams (11) said. “It was a way to show school spirit.”

After the parade, each class gathered at separate quadrants of Davis Field. Cheers erupted in four bursts as Director of Student Organizations and HSLT advisor Eric Kallbrier announced each class. HSLT Outreach Coordinator Elvis Han (12), who also participated in the parade and the tug-of-war competition, expressed his excitement for the latter event.

“[I’m most proud of organizing tug-of-war] because you just bring a rope, but you get to see all the energy come out,” Elvis said.

Representatives from the junior and freshman classes competed against each other during the first preliminary round of tug-of-war. Although the juniors persisted for one minute, they lost their grip to the freshmen. Sophomore and senior representatives competed in the second round, during which the sophomores fell to the seniors after eleven seconds. Dean of Students Kevin Williamson judged both rounds while advisors voiced their support.

Miki Mitarai (10), who competed on the sophomore tug-of-war team, enjoyed the event despite their defeat.

“I think a lot of us went into it not necessarily aiming to win but just to have fun with the rest of the class,” Miki said.

The sophomores and juniors will contend for third place before the Homecoming game on Harker Day, and the freshmen and seniors will face each other during halftime to determine the 2021 tug-of-war champion and winner of 400 spirit points. Following a year of spirit events on screens, the parade and tug-of-war competition allowed the upper school community to express their withheld energy and celebrate their classmates.

“I didn’t really notice that [this was my last spirit rally]. I just wanted to have as much fun [as possible], but I’ll definitely miss this kind of feeling coming into college,” Elvis said.

A previous version of this article misnamed Alex Zhong’s  (9) last name as ‘Zhang’.  This article has been updated on Nov. 6, 2021, to reflect the correction of this error.