“We knew that it was going to be a difficult [match] because Menlo is a really tough opponent. It was the last match of our season, and we all wanted to end on a high note,” team captain Sachi Bajaj (12) said. “When the last match finished, there was a huge rush of emotions. There were a lot of Harker people in the crowd even though it was an away match, and it was really special for us to be able to share that moment with them.” 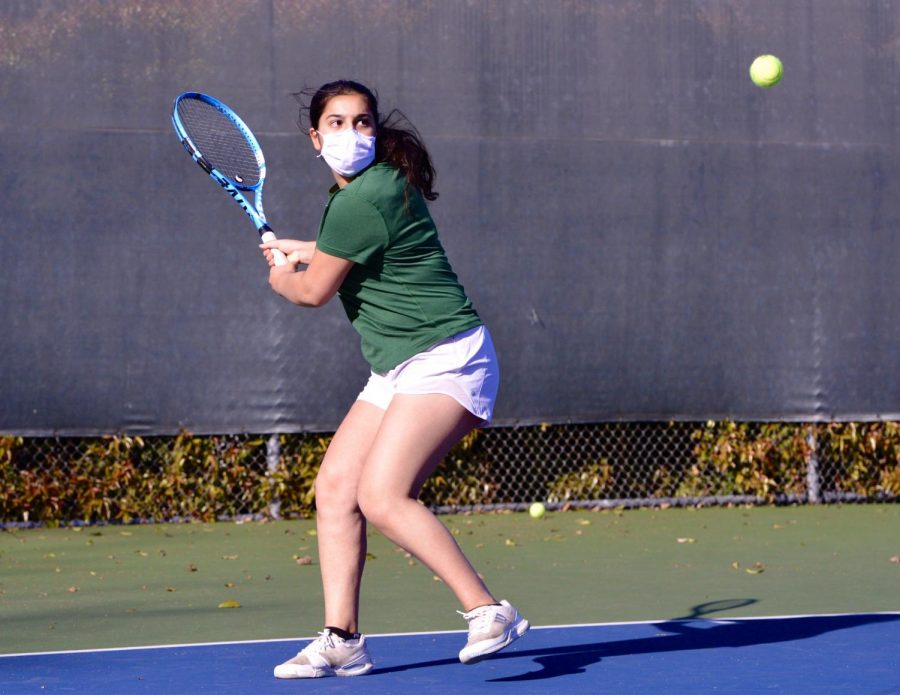 After going undefeated in league with a record of 7-0, the Eagles, led by Head Coach John Fruttero, came into CCS ranked as the sixth seed. They went on to shutout Aptos, third-seeded Westmont and second-seeded St. Francis in consecutive matches to earn their berth in the finals.

Rachel, one of seven underclassmen to represent Harker in the finals match, attributes the tea m’s success this season to their spirit and camaraderie.

“Our biggest strength is definitely the care we have for each other. We are always cheering for each other, and we truly believe that no team is as close as we are,” said Rachel. “It’s really comforting knowing that when you have a tough match, you have teammates in your corner supporting you.”

Sachi, one of four seniors on the team this year, noticed that, as the season progressed, the girls began doing a much better job of focusing in on their individual matches rather than on the bigger picture of an entire lineup.

“One thing we learned this season is to not let the other matches influence you. Early on, our eyes were always on the other courts, trying to see how our teammates are doing and how the lineup is coming together,” Sachi said. “But I think everyone has improved [in that aspect]. We still remember the collective team goal, but know those things will fall into place if we each handle our own matches.”

Rachel credits this year’s seniors for their leadership and for being great role models for the underclassmen on and off the court.

“The seniors were great people,” Rachel said. “They really helped bring the team together with their energy and spirit, and I was able to learn a lot from them and their experiences in high school and on the tennis team these past four years. We’re definitely going to miss them next season.

Girls tennis season will kick off again in the fall, and the team hopes to pick up right where they left off, replicating this season’s success with another CCS Championship next year.