Class of 2021 finishes high school career with baccalaureate and graduation

The class of 2021 walked across the stage at the Mountain Winery in Saratoga to receive their diplomas in front of a socially distanced audience on Saturday, May 22. The first event at the site in 14 months, each student was limited to two guests according to COVID-19 protocol. 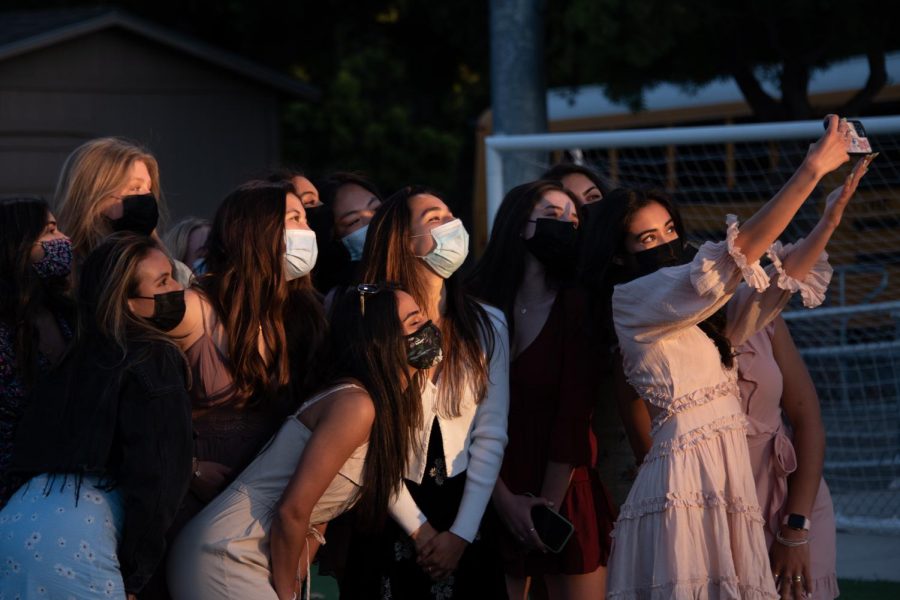 Gallery|6 Photos
Jessica Tang
Farah Hosseini (12) holds up her phone to take a selfie with friends at Baccalaureate on May 21. The ceremony lasted from 8 to 9 p.m. and was followed by the Lifer Event.

Graduation lasted from 10 a.m. to 12 p.m, beginning with opening remarks from assistant Head of School Jennifer Gargano followed by a procession to the tune of “Pomp and Circumstance” by Sir Edward William Elgar. Parents brought cameras and cell phones, recording and waving as the students passed by.

Seniors wore graduation gowns and caps, which they decorated with logos of their respective colleges. After walking across the stage, they sat with their parents, according to a seating chart assigned by the school in a random lottery process.

Head of Upper School Butch Keller then introduced Daniel Wang (12) and Claire Luo (12), marking the first time in school history that two valedictorians spoke at graduation. In his speech, Daniel touched upon the friendships and deep bonds formed between members of the class and noted the losses they faced due to the pandemic. Claire thanked the class for their “love, laughter, and life” and discussed embracing the uncertainty of the future.

“I think the graduation ceremony was super cool because it was probably one of the last times our class will be all together physically,” Claire said. “And we’ll kind of be separating, which is very bittersweet, [but] I’m also looking ahead and excited to see what my classmates end up doing because I think it’s just such a wonderful group of people.” 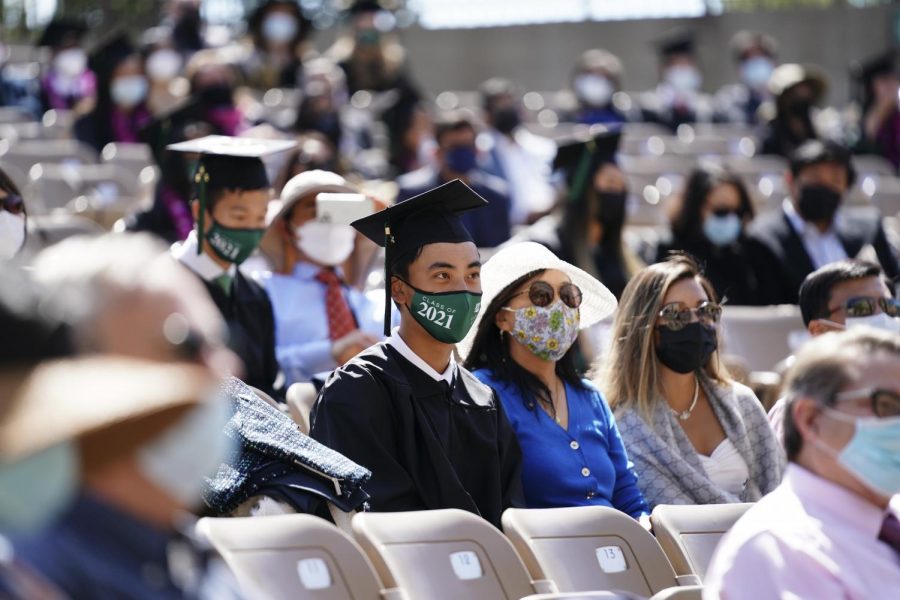 Gallery|9 Photos
Provided by Office of Communications
Gabriel Yang (12) watches the graduation ceremony with his family, where the seniors graduated at Mountain Winery on Saturday, May 22. Each student was limited to two guests due to COVID-19 regulations.

Members of the senior orchestra and the Senior Graduation Chorus performed Joseph Haydn’s “Adagio” from String Quartet in F. Minor, Number 47, and “Always Something Sings” by Dan Forrest respectively.

Keynote speaker and alumna Dr. Roberta Wolfson (‘05) then addressed the audience. A lecturer at the Stanford Program in Writing and Rhetoric, Dr. Wolfson encouraged seniors to assume personal agency in shaping their identities. Between speeches, Mountain Winery staff wiped down the microphones and podium to prevent contamination.

Following came a speech from Head of School Brian Yager, in which he spoke of the doubling of longevity over the past century and medical achievements that are often taken for granted.

“Educational institutions have played a major role in the developments that enabled our species’ recent increase in life expectancy,” Yager said. “Research opened the door to technical and societal changes, and the soft practices at schools, associated with collective norms and behaviors, have paved the way for our understanding and adoption of practices that further our longevity.”

Nearing the end of the ceremony, seniors lined up alphabetically as senior class dean and upper school history and social science teacher Carol Green called them to receive their diplomas from Yager. After returning to their seats, a cheer rose up from the crowd as the class of 2021 moved their tassels to the left and waved their caps in the air, signifying the end of their high school journey.

“Graduation wasn’t as dramatic as in regular years, when you get to sit with your friends and throw your caps up in the air, but it was still really wonderfully ceremonial as an end to our high school career, and I was really glad that we got to do that this year,” Michelle Si (12) said.