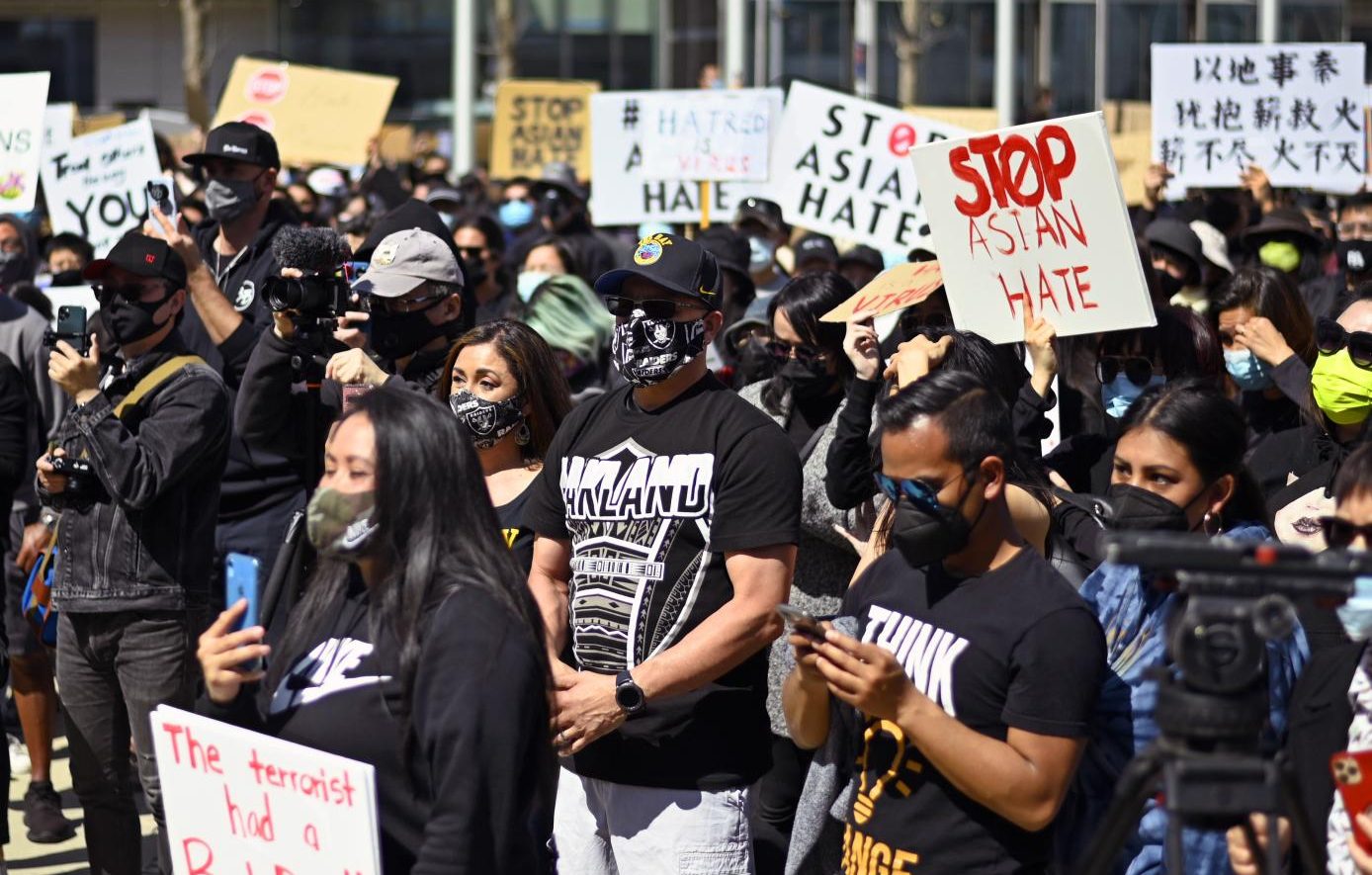 Over 2,500 protestors gathered at the #StopAsianHate Community Rally at San Jose City Hall on Sunday, March 21, at 1 p.m. to protest the recent violence against Asian Americans across the nation. The rally focused on Asian American discrimination, minority intersectionality, recent injustices against elderly Asian Americans and the history of Asian American and Pacific Islander (AAPI) discrimination in the United States. Protestors were encouraged to wear black in solidarity with the AAPI community and wear masks and practice social distancing.

This past year, a national report by “Stop AAPI Hate” reported that Asian Americans have experienced over 3,800 hate crimes, with 1,226 incidents in California and 708 reported in the Bay Area alone.

The #StopAsianHate rally, the largest protest to occur in the nation this past weekend, was a grassroots effort that came together in just over 72 hours, according to organizers Eric. J Chang and Adam S. Juratovac. The organizers recruited speakers to present to the crowd of thousands.

On his TikTok page, Juratovac created a six-part video series following the Atlanta shooting that centered around his conversation with his mother, an immigrant from Korea, who shared her fear of grocery shopping in the dark due to the recent wave of Asian-directed hate crimes.

“We are sick and tired of seeing our elders being victims of racist and cowardly attacks within our community,” Juratovac said in an email sent out to registered attendees after the march. “We will not stand idly by and watch. We will act and we will react.”

Victoria Chon, a Korean-American teacher and member of the Santa Clara County Board of Education Trustee, was one of the speakers. She believes that it is vital to show support for Asian American communities, families and friends and asked the crowd: “How do we stand together? How do we fight racism? How do we find the hate?”

Her answer is to “have the hard conversations.”

“We have to call out ignorance, call out racism, call out those jokes,” Chon said. “The children are our future, the children are going to be the leaders that change these thoughts, but if we don’t have the conversations with them, they’re gonna grow up without that knowledge and without the courage to speak up.” 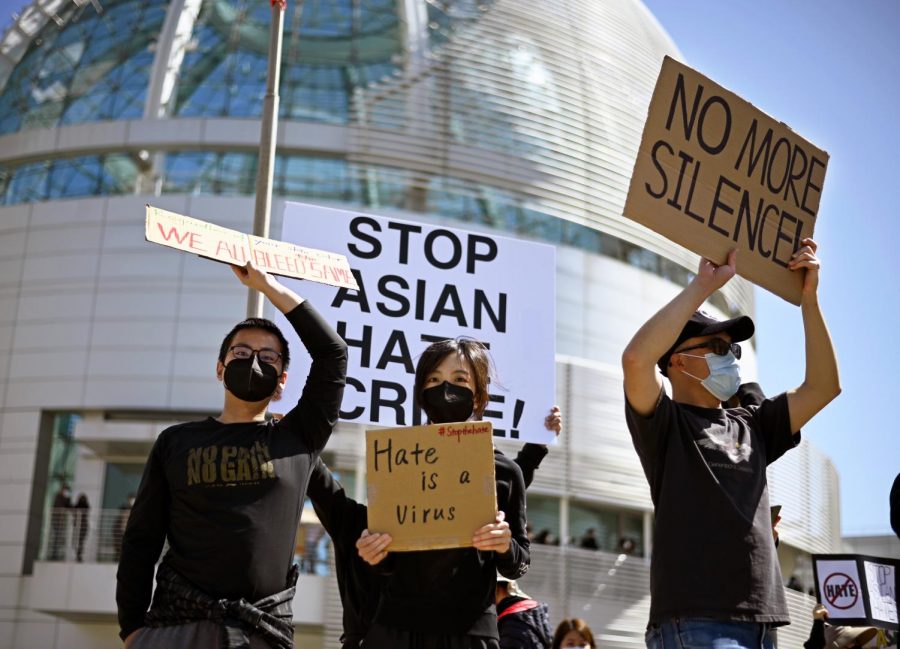 Gallery|10 Photos
Alysa Suleiman
Protestors hold up signs rallying against the recent hate crimes in front of the Rotunda at San Jose City Hall on March 21.

Chon spoke about how as a child and one of the only Korean-Americans in her grade school, she never possessed the courage to speak up about the discrimination she faced. Now, she hopes to give that courage to the students in her classroom and the students who listened to her speak at the rally.

Protestors lined up against the curb of East Santa Clara Street to wave their signs at passing cars, who honked their support in response. The rest of the crowd packed into the West Plaza and in the balcony of the second floor of the Rotunda, while the invited speakers, including California’s 27th District Assembly Member Ash Kalra, continued to spread their message to the crowd.

“The hatred we’ve seen against our community over the last year didn’t start a year ago,” Kalra said. “It’s deeply embedded for generations and generations in this place.” 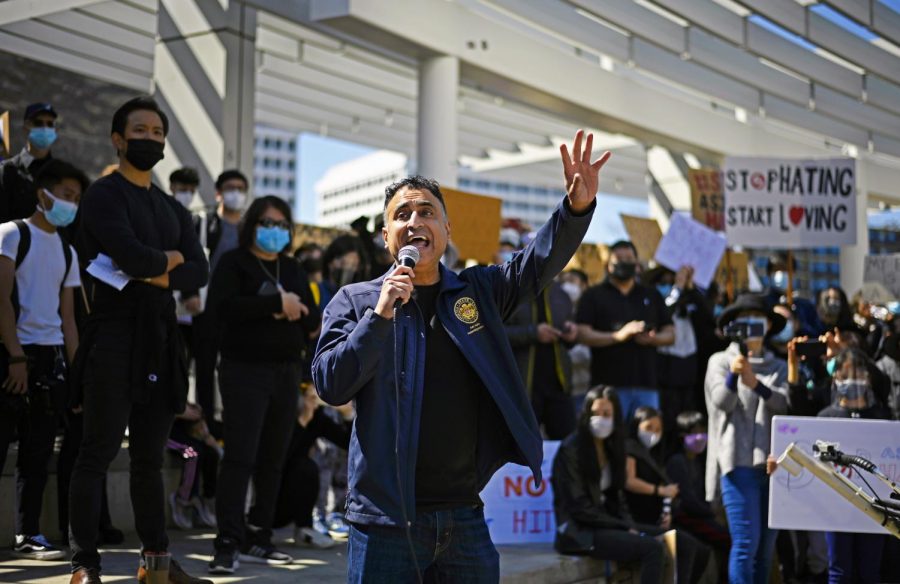 Former congressman Mike Honda closed the speaker event by emphasizing the power of younger generations, who harness the power of technology and can raise awareness about the AAPI hate crimes.

“This has got to stop. We cannot be silent. Silence is being part of the problem,” Honda said. “Since before 1882, hate was propagated by the media, but I want to thank the media for being here because they’re our outreach. The big change today is this technology. We’ve got more power in our hands, and we use this tool to make sure that our message is taken out there.”

Kayla Chiu, a 22-year-old Chinese and Korean American, participates in SJ Roll Call’s monthly skating events. As an Asian American and a roller skater, she felt that the AAPI Solidarity Roll Out was the perfect opportunity for her to be a part of the community and protest the “upsetting” string of hate crimes.

“They’re specifically attacking senior citizens, and I myself am worried about my own family members being attacked,” Chiu said. “I can’t help but feel angry about it because we didn’t do anything wrong. We’re all victims to this pandemic, and we’re not the reason to blame.”