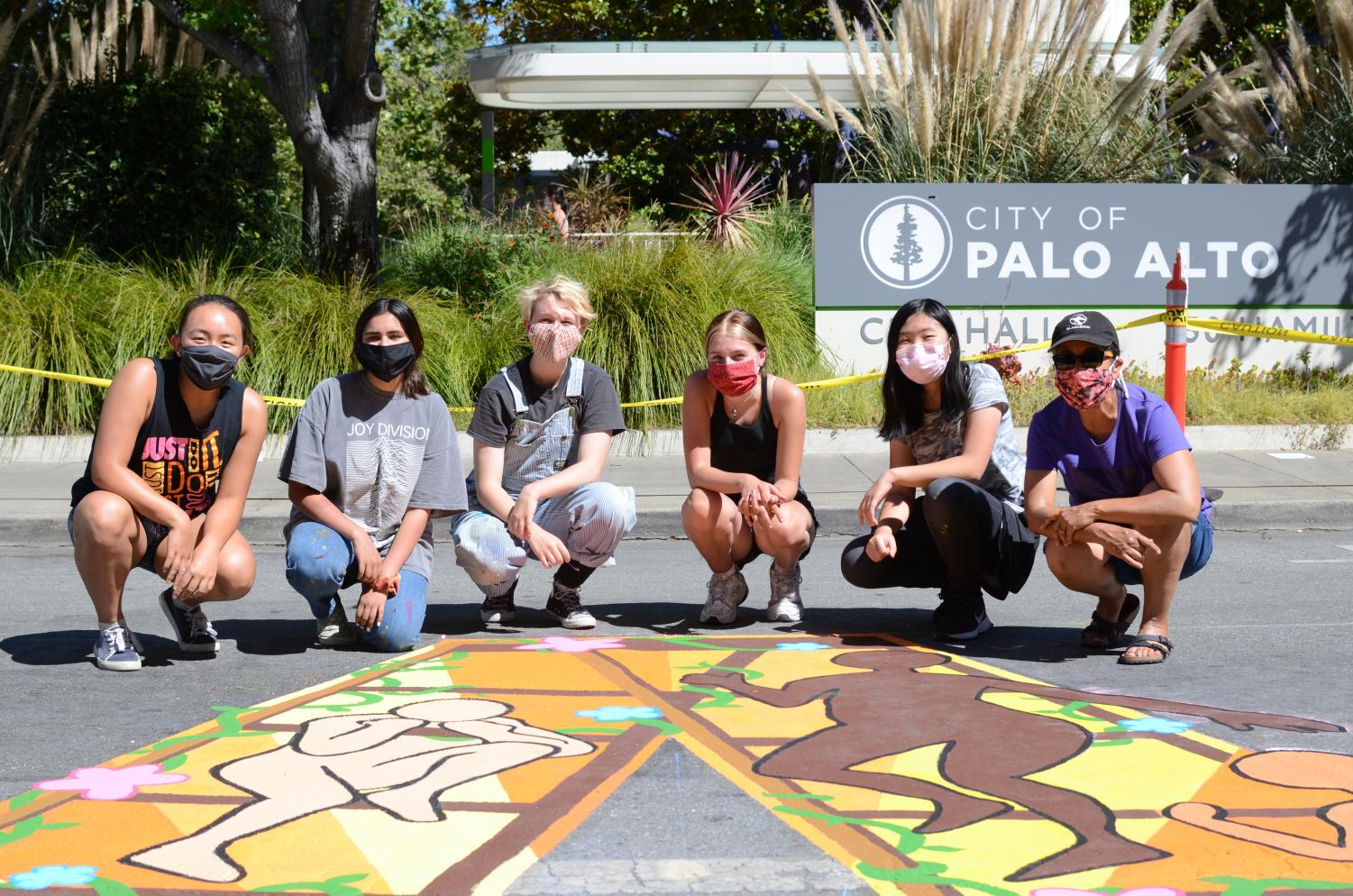 Members of the upper school Art Club stand behind their artwork, part of a Black Lives Matter street mural organized in Palo Alto on June 30.

Pulse of the People: Youth activism stands out in Black Lives Matter movement

“Tell me why they want to beat us black and blue and bloody red. Keep us stagnant working for a system with no damn respect. Politicians committing illegal crimes with no arrest, out of breath, hoping that my life is more than just a death —”

The music filled the San Francisco Civic Center Plaza, as hundreds of people gathered on June 19, or Juneteenth, to protest systemic racism against African Americans and to demand that the city defund the police department and invest in a people’s budget. Xanubis, a nineteen-year-old rapper of Black and Pacific Islander descent, performed to the cheers of the crowd, pouring his anger and hurt into his music.

“There’s pain. There’s so much pain that is inside of my body already, just knowing about all the injustices that happen in this world and the fact that they keep continuing to happen and the fact that there are people who are too ignorant to see what is happening,” he said. “It’s painful, especially when people are losing their lives daily, when people are being treated wrongly on a daily basis.”

Having grown up in San Francisco’s Tenderloin neighborhood — which has a majority of non-white residents and a 31% poverty rate, according to census data from 2014 — Xanubis saw firsthand how the police have hurt members of his community, allegedly being trained to fear them and treat them like “monsters.” Following the deaths of George Floyd, Breonna Taylor, Ahmaud Abery and other unarmed African Americans who were killed by police officers this year, Xanubis used his platform as a musician to demand change in the system.

“It’s dirty out here. It’s a militia, it’s a f—ing army. They don’t look at us like people,” he said. “This isn’t something that goes away overnight, but it’s definitely very emotional for me to do this [performance], because I feel like this is the catalyst, this is part of the change.”

A growing number of teenagers across America, like Xanubis, have been speaking out and helping create momentum for the Black Lives Matter movement these last few months. Even within the Harker community, several students have organized fundraisers, compiled resources or worked closely with administration to start a conversation about race and racial discrimination at a local level. The Student Diversity Coalition (SDC) — created by Brian Pinkston (12), Dylan Williams (12), Natasha Yen (12) and Uma Iyer (11) in July — collaborates with the Diversity, Equity and Inclusion (DEI) Committee to lead this charge forward.

“Having the opportunity to form a group that really focuses on something that I feel has been lacking for a while is really important to me,” said Dylan, who is biracial and identifies as Black and white. “We want to help educate our community on the different cultures, problems — the living experiences of Black and Brown people — just to give a voice to the underrepresented in our community.”

Some of the SDC’s initiatives will include creating affinity groups for Black and Latinx students, celebrating cultural heritage months with speaker events and assemblies, hosting roundtables geared towards education and modifying the handbook to reflect their efforts.

“I feel like the goal right now for the SDC and the affinity groups is to create a foundation for longevity,” said Uma, who identifies as Indian American. “The SDC is not a club, and neither are the affinity groups. And that is really important to us, because DEI issues at Harker should not have to be renewed.”

Uma called herself “lucky” to be a South Asian at Harker, because she has “such a prevalent community” on campus — something many students don’t have. For her, a large part of being an ally right now is understanding this issue and supporting fellow classmates that are not given the same privilege.

Others at Harker have also joined the conversation. To show their solidarity with the Black Lives Matter movement, the Art Club contributed to a street mural in Palo Alto on June 30. Students Elliot Kampmeier (12), Arya Tandon (12), Maria Teplova (12), Natasha and Allison Lee (10) — as well as art teacher Pilar Agüero-Esparza and history teacher Roxanna Pianko — collaborated with 15 other local art groups to spell “Black Lives Matter” in block letters in front of the Palo Alto City Hall. They plan to pursue similar work in the future, even bringing this idea to Harker by filling the blank walls on campus with murals and illustrations.

“Art is a very powerful means of passing on a message, illustrating a message,” said Elliot, who identifies as white. “It’s a really easy way to bring community together, no matter the language, no matter the backgrounds and places we come from. We can all communicate visually, and connect with emotions and stories that way.”

Art Club painted the first “A” for the street mural, deciding to draw a ladder to symbolize the idea of climbing to a higher ground as a united community. Natasha, who identifies ethnically as Chinese, appreciated the chance to create art with people from all around the Bay Area. She also worked with Dylan and Farah Hosseini (12) to create a document in June with BLM resources for Harker students, as a way to educate others about allyship.

“Racism and all these social issues are really big issues to tackle, but I think focusing on our local communities and smaller communities is really important, because it’s also [a] grassroots movement,” she said. “I just hope that, especially now, things will start to move forward and that we can start to see change — change that’s been needed for a long time.” 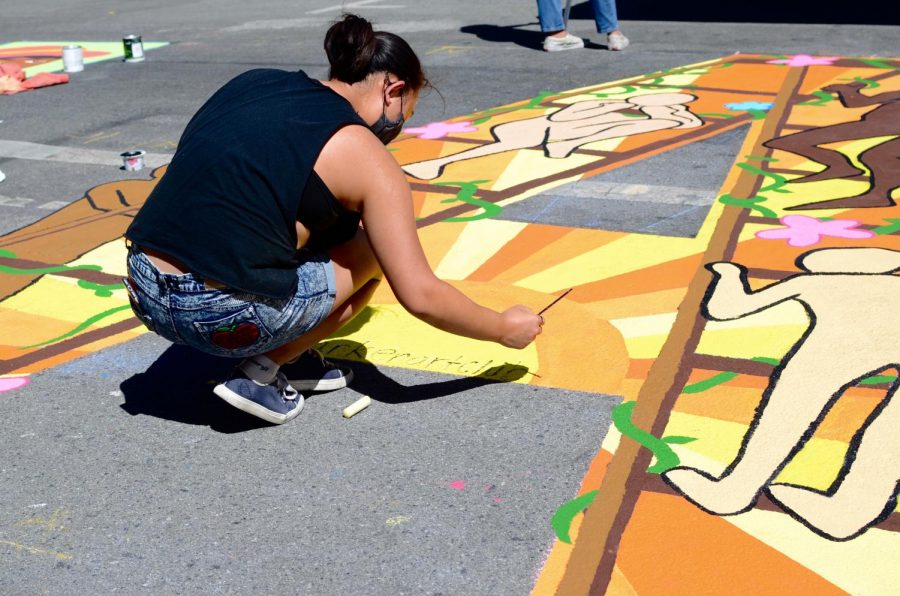 After seeing a lack of support and resources for African Americans in his community and for people hurt by the coronavirus pandemic, Kabir Ramzan (9) and his sister Ameera, who is in the sixth grade, organized a GoFundMe fundraiser in late June to raise awareness of these issues and to especially promote STEM education for Black girls, who face “a combination of oppression in race and sex.” Together, Kabir and his sister raised over $2,500 and divided the donations equally between two organizations: Black Girls CODE and Second Harvest of Silicon Valley.

“All these causes have the same central foundation that people are not being able to have access to the same opportunities,” said Kabir, who identifies as Indian American. “With the killings [of African Americans by police officers] happening very recently at the time, we felt like it was a really big problem. We need to face it to be able to make sure that everyone feels equal and included and has access to the same opportunities and resources.”

Dylan echoed this sentiment, believing that a lot of people, especially the youth, are feeling empowered right now and are starting to speak out and advocate for change in their communities.

“[For] myself, a lot of my friends, a lot of my family members that are my age, this summer has sparked something in them about being passionate about social justice and taking initiative,” she said. “Especially in these times where I know politics can be very polarizing, I think that a lot of people our age are feeling the need to shape the future that they want to see. It’s a very youth-led charge right now.”

For more information about the Student Diversity Coalition’s initiatives, read their mission statement or email them at [email protected]. To sign up for the SDC mailing list or to join an affinity group, fill out this google form. For anyone interested in working with the Art Club on future projects, reach out to officers Elliot Kampmeier (12) and Maria Teplova (12) at [email protected] and [email protected].