Joseph R. Biden won the 2020 presidential election, defeating incumbent President Donald. J. Trump as he crossed the threshold of 270 electoral votes with a win in the key battleground state of Pennsylvania (20 electoral votes).

Kamala Harris to be first female vice president of color

Joseph R. Biden won the 2020 presidential election, defeating incumbent President Donald. J. Trump as he crossed the threshold of 270 electoral votes with a win in the key battleground state of Pennsylvania (20 electoral votes). He is the first candidate to beat an incumbent in over 25 years.

As of 9 a.m. on Nov. 7, Biden had 290 electoral votes to Trump’s 214. Alaska, Georgia and North Carolina have not been called yet, but Biden is currently leading in Nevada and Georgia by slim margins. Trump has not yet conceded to Biden, promising a legal battle before giving up the presidency.

Biden also won the popular vote by a margin of 2.8% getting nearly 75 million votes, the most any presidential candidate has gotten in American history. Around 145,000,000 Americans voted in this presidential election, with both candidates making voter turnout history as Biden and Trump both had more popular votes than Barack Obama.

America, I’m honored that you have chosen me to lead our great country.

The work ahead of us will be hard, but I promise you this: I will be a President for all Americans — whether you voted for me or not.

I will keep the faith that you have placed in me. pic.twitter.com/moA9qhmjn8

Sen. Kamala Harris (D-C.A.), Biden’s running mate, also made history with her win today, becoming the first woman and the first woman of color on a winning national ticket. Following Hillary Clinton’s loss four years ago, she is now the highest-ranking woman to serve in government.

With Harris’s Senate seat now vacant, California Governor Gavin Newsom will need to appoint a replacement who will serve until 2022, the end of her six-year term. Although Gov. Newsom has not commented on replacements for Harris, some analysts believe that the appointee, almost certainly a Democrat, would likely be a woman of color to preserve the historic representation that Harris has represented. Candidates include Secretary of State Alex Padilla, Representative Ro Khanna (CA-17) and Mayor London Breed of San Francisco.

Biden’s margin in the popular vote will likely continue to grow in the next few days as ballots, particularly absentee and mail-in ballots, continue to be counted in certain states. The past three days since Election Day have been full of controversy and turmoil as swing states continued to count votes, dealing with the barrage of mail-in votes that saw an uptick in popularity this year due to the coronavirus pandemic.

Biden’s presidency will kick off with unprecedented challenges in the nation, ranging from the coronavirus pandemic, which has already taken 240,000 American lives, to a countrywide racial reckoning stemmed from police brutality and protests this past summer. His victory also signals the end of the Trump presidency, a period characterized by stark partisan and ideological division across America.

Trump refused to concede the election to Biden today, releasing a statement on his website. He wrote, “Beginning Monday, our campaign will start prosecuting our case in court to ensure election laws are fully upheld and the rightful winner is seated.”

The Trump campaign has already filed a number of lawsuits in states like Pennsylvania, Michigan and Nevada. Republicans have challenged Pennsylvania state laws that give voters extra time to fix minor errors on their mail-in ballots, which have to now be set aside while courts debate the ruling.

There is also a case facing the Supreme Court about whether Pennsylvania should have the authority to count mail-in ballots beyond Nov. 3. The ruling would not currently stand to have any effect as even without Pennsylvania, Biden meets the 270 electoral vote threshold.

The announcement of the result earlier this morning drew out cheering crowds across the nation, from Black Lives Matter Square in Washington, D.C.to New York City. Biden ran his third presidential campaign on a message of unity and respect, particularly defining the threats of President Trump on the preservation of democracy in America.

In a speech last night in Wilmington, DE, Biden said, “We may be opponents, but we’re not enemies; we’re Americans. No matter who you voted for, I’m certain of one thing: the vast majority of 150 million Americans who voted, they want to get the vitriol out of our politics.”

The Biden campaign has announced that he will address the nation at 8 p.m. EST. 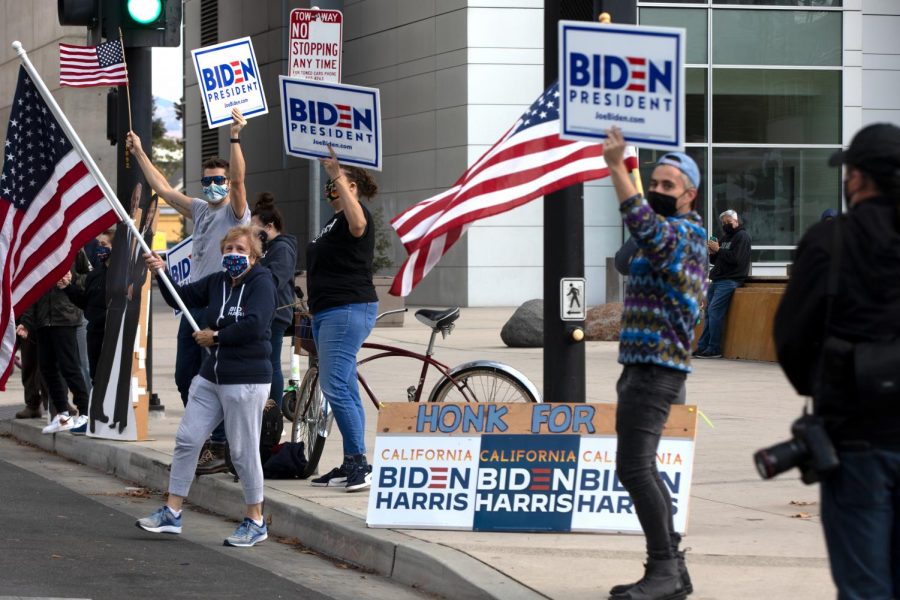 Nov. 7 will be a day for the history books. This morning, Joseph R. Biden Jr. won the 2020 presidential election, beating incumbent Donald J. Trump by 290 to 214 electoral votes. Kamala Harris’ win also marks a series of firsts for this nation: she will become the first female vice president and the first Black and Indian American vice president.

Below, we have gathered the reactions to the election results from members of our Harker community. Continue reloading this page to see updates throughout the day and to hear what students, teachers and parents are thinking about right now.

7:45 p.m. Check out this live reaction from senior Ethan Choi about how he became involved in political activism and what Biden’s win means to him:

7:15 p.m. Check out this live reaction from senior Selin Aras about Biden’s presidency and being politically vocal:

6:00 p.m. “A lot of his actions were divisive; a lot of his actions were targeted rhetoric at individuals in the Democratic Party,” a junior said. “It should have been very easy for him to get reelected, because he was faced with the pandemic, and throughout history, when you’re a leader and you’re faced with something which tests the soul of the nation, if you do at least a decent job, your popularity will skyrocket.”

4:30 p.m. Check out this live reaction about voting trends and the nation’s global image from David Reed, who is Canadian and a parent of an upper school student:

4:15 p.m. Check out this live reaction from upper school math teacher Lola Muldrew about the personal significance of Harris’ win:

3:20 p.m. Check out this live reaction from sophomore Lavanya Subramanian about what Harris’ win means to her, as an Indian American:

2:45 p.m. Check out this live reaction from freshman Defne Avkarogullari about the future Biden presidency.

2:30 p.m. Check out this live reaction from upper school English teacher Beth Wahl about the 2020 election process and her opinions on Biden:

1:25 p.m. Check out this live reaction from freshman Ella Lan about what the election results today mean to her:

1:10 p.m. Check out this live reaction from upper school history teacher Mark Janda about what he thinks this election will mean for the future of this nation:

1:00 p.m. Check out this live reaction from junior Uma Iyer about her thoughts on Biden and Harris’ win:

12:30 p.m. Check out this live reaction from upper school biology teacher Matthew Harley about his emotions surrounding the election and the political atmosphere today:

12:10 p.m. Check out this live reaction from junior Kalyn Su about her opinions on the future Biden-Harris administration:

12:00 p.m. Check out this live reaction from senior Alexander Kumar about what changes he expects following this election:

11:00 a.m. Check out this live reaction from senior Farah Hosseini about learning the news of Biden and Harris’ win this morning:

10:50 a.m. Check out this live reaction from senior Anika Fuloria about her feelings surrounding Biden’s win and what it means to her:

10:45 a.m. Here is a quote from junior Keya Mann about what Harris’ win means to her, as an Indian American:

“She’s the first woman and she’s the first Indian [American and] African [American] to be vice president,” Keya said. “I’m incredibly excited. I feel like this is a big step for us in terms of us increasing diversity in our government. Actually, that was one of the first things my dad had told me when we found that [Biden and Harris] won the election; he was super excited to see that we were being represented in our country.”

10:40 a.m. Check out this live reaction from senior Ajay Madala about his expectations for the Biden presidency and his opinions on Harris’ win today:

10:20 a.m. Check out this live reaction from sophomore Michelle Jin about her thoughts on Biden’s win:

*Editors’ note: This article was revised on October 18, 2021. At a source’s request, his name and video were removed to provide anonymity due to fear of viewpoint discrimination.