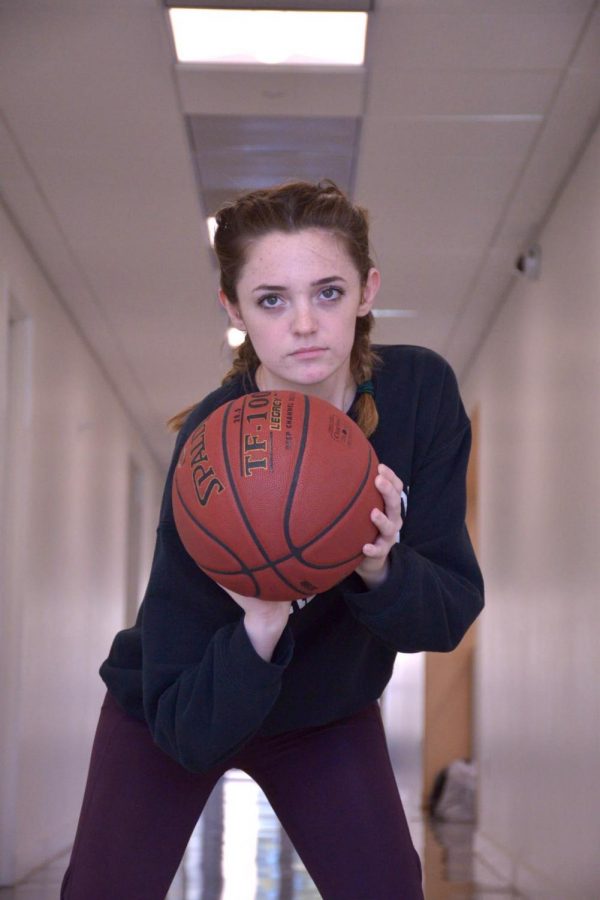 “I’m most proud of how I've developed my personality throughout middle and high school. I have switched between friend groups with people that I thought I fit in with and then … it just didn't work out. I think I've finally found the people … that I really enjoy my time with and think I can spend my last year of high school with,” Haley Arena (12) said.

Humans of Harker: The final countdown

by Vasudha Subramanian and Pelin Unsal

With a short amount of time left on the clock, Haley Arena (12) dribbles the basketball across the court as her teammates cheer from the sidelines. Her dirty blonde hair sways behind her as she swiftly moves to an open spot and manages to score nine more points for her team. With the help of her teammates, she carries the Harker varsity basketball team to victory.

Haley’s sports-oriented family influenced her upbringing in sports. With her mother being a junior Olympic swimmer and her father having a division one soccer scholarship in college, Haley started off playing soccer, switched to track and cheer and eventually landed on basketball, which she has been playing for twelve years. She plays both inside and outside of school and is currently on the school basketball team. Through many wins and losses in her basketball journey, Haley has grown both individually and socially.

“I’m most proud of how I’ve developed my personality throughout middle and high school. I have switched between friend groups with people that I thought I fit in with and then … it just didn’t work out. I think I’ve finally found the people … that I really enjoy my time with and think I can spend my last year of high school with,” Haley said.

One of her closest friends, Sara Lynn Sullivan (12), remembers when she first met Haley in her freshman year during a Study of Theater class. Over time, they have become extraordinarily close, and their matching personalities have helped them strengthen their friendship.

“We both have habits where we just say really weird things. I think that’s a lot of what our relationship is built on. It’s just the fact that we’re super sporadic and spontaneous,” Sara said. “It’s really weird, [we have] similar energies, I think.”

Basketball has also helped Haley change her mindset on failure. She now approaches life through hope.

“This is simple but … it’s just going to get better. I enjoyed freshman year and then in sophomore and junior year usually you think you want to quit. But just know that there is a light at the end of the tunnel and that [you will] get through it,” Haley said.

Upper school history and social science teacher Mark Janda taught her in both freshman and sophomore years. He not only praises her for her optimistic mindset, but also for her strength in communicating with those around her.

“[Haley’s] ability to really converse with anyone and to make those people feel important, included and valid is really a gift,” Janda said. “And from that comes humility and humbleness … I think people feel comfortable talking to her.”

Aside from her dedication to basketball, Haley is interested in playing video games in her free time. This hobby led her into the decision of building her own computer with her long-time friend Henry Cuningham (12).

“She comes to my house to play a lot of video games,” Henry said. “So I was like, ‘You need to get your own thing.’”

Ever since, the two have been dedicated to finishing the computer. Haley has been using the money she earned from her part-time job outside of school to pay for her computer building.

“From every paycheck I’ve gotten, I’ve taken this little chunk out of it to pay for a piece or something … It’s taken so long, but it’s finally done,” Haley said.

Haley’s determination has been noticed by those around her. After four years of a close-knit friendship, Sara comments on how she has seen Haley become stronger as a person and deal with many hardships.

“I’ve seen her go through a lot of tough times, and I’ve seen her become stronger through pretty much everything,” Sara said. “I also admire that because she’s very resilient, and I think that’s also something that has grown with her over time.”

Janda, having watched Haley’s growth over a two-year time period, appreciates her drive and encourages Haley to fulfill her dreams by embracing her passion.

“By the time she got to the end of her sophomore year, it was very clear that this was a young woman in charge,” Janda said. “The drive and competitiveness that she shows on the basketball court that she’s also been able to adapt to her academics – she needs to hold onto that … If she can have that fire and competitiveness combined with that humility and work ethic, the sky’s the limit.”