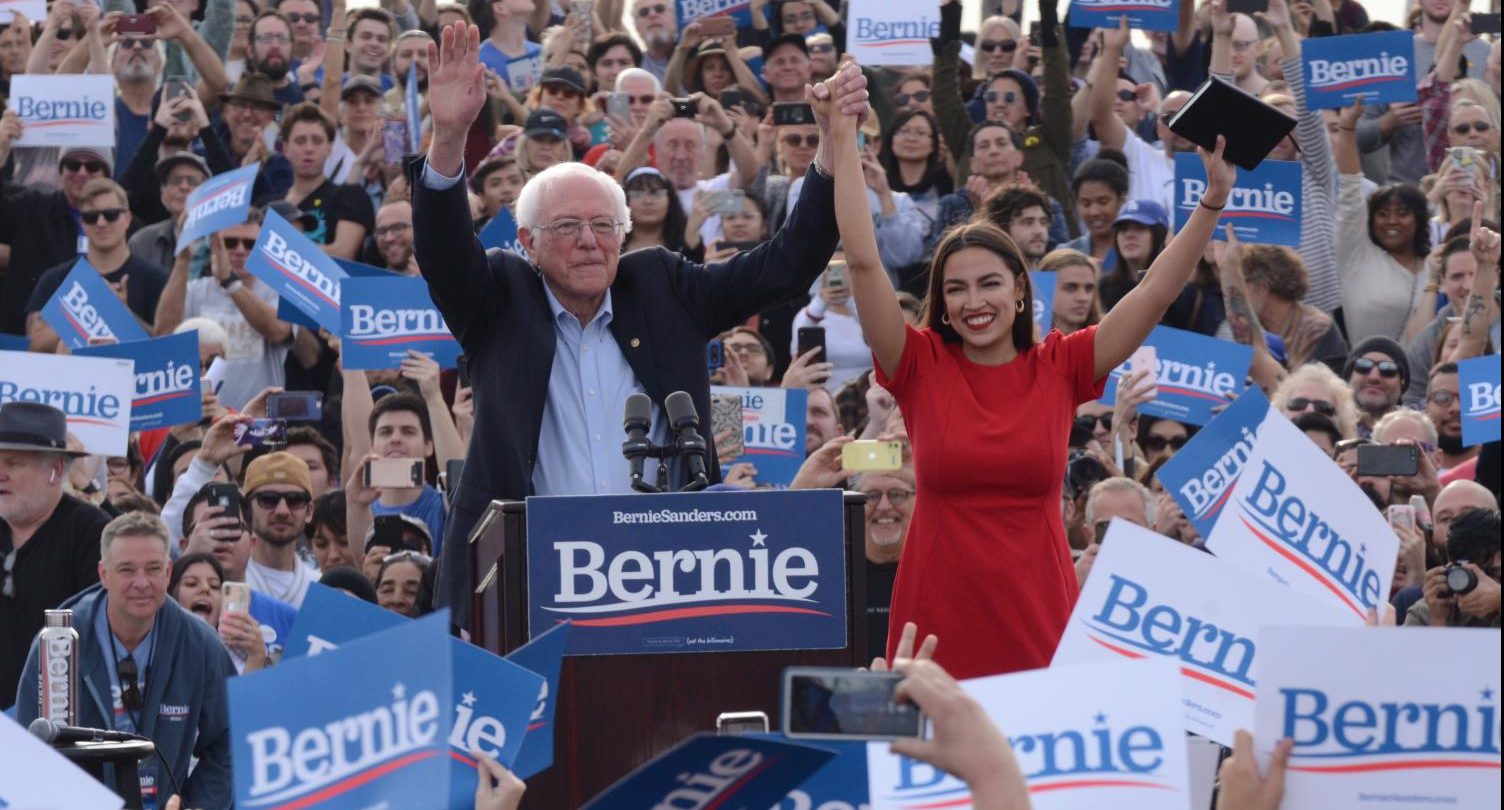 At the start of his speech, presidential candidate Sen. Bernie Sanders joins hands with Rep. Alexandria Ocasio-Cortez as the crowd shows their support. This rally was the conclusion of Sanders’ campaign across Southern California over the past week. (Nicole Tian)

At the start of his speech, presidential candidate Sen. Bernie Sanders joins hands with Rep. Alexandria Ocasio-Cortez as the crowd shows their support. This rally was the conclusion of Sanders’ campaign across Southern California over the past week.

An ocean of blue signs promoting “Bernie 2020” floods Venice Beach as Rep. Alexandria Ocasio-Cortez (D-NY) runs upstage and greets the crowd members with an enthusiastic “What’s up Los Angeles!” Shouting back their affirmations, tightly packed crowd members drown out one another, wildly waving their campaign signs and posters in the air.

“Los Angeles and California, are you all ready for the revolution…” she boldly declares, each of her statements followed by a wave of applause. “I’m so thrilled to come to the heart of where we’re going to change this country.”

As the first Democratic primary caucus draws closer, Ocasio-Cortez, a freshman and rising star in Congress, announced her first public endorsement of Democratic presidential candidate Sen. Bernie Sanders at a rally in Venice Beach, Los Angeles, on Saturday, pushing forward the race to 2020.

Currently, Sanders polls at an average of 19.3% according to national polls, trailing behind leading Democratic presidential candidate Joe Biden. With the first Democratic caucuses drawing closer and closer, Sanders held five events in the past week across parts of southern California, whose caucus will be held on March 3.

The rally at Venice Beach capped off Sanders’ California events and drew a crowd of 14,147, according to Los Angeles Fire Inspector Alan Babin. In her endorsement speech, Ocasio-Cortez, who was featured as the keynote speaker of the rally, emphasized that Sanders’ message is the start of building a “government and economy that works for all people,” as Sanders himself later declared in his rally address. 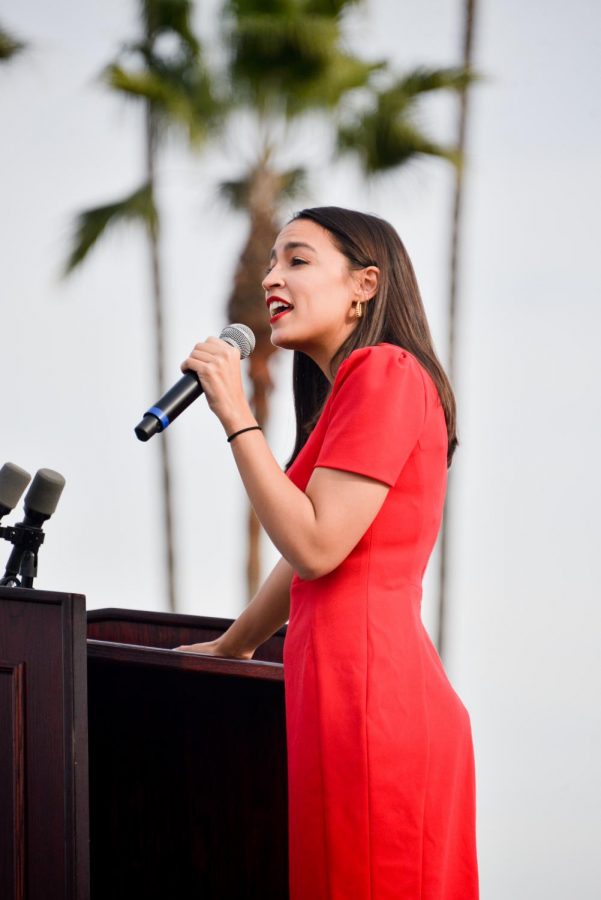 Gallery|11 Photos
Kathy Fang
Rep. Alexandria Ocasio-Cortez takes the microphone and addresses the crowd at Sen. Bernie Sanders' campaign rally last Saturday, which was held in Windward Plaza in Venice Beach. In her speech, Ocasio-Cortez underlined the importance of grassroots funding in the Sanders campaign's fight for working people's rights.

Sanders’ campaign focuses on issues of healthcare reform, a $15 minimum wage, an extensive climate change plan and a rallying cry against corporate funding. Ocasio-Cortez, who had worked as an organizer for Sanders’ 2016 presidential campaign, champions many of the same messages, especially the belief in building “an advanced nation” whose government promises equality, justice, and social services to all citizens. 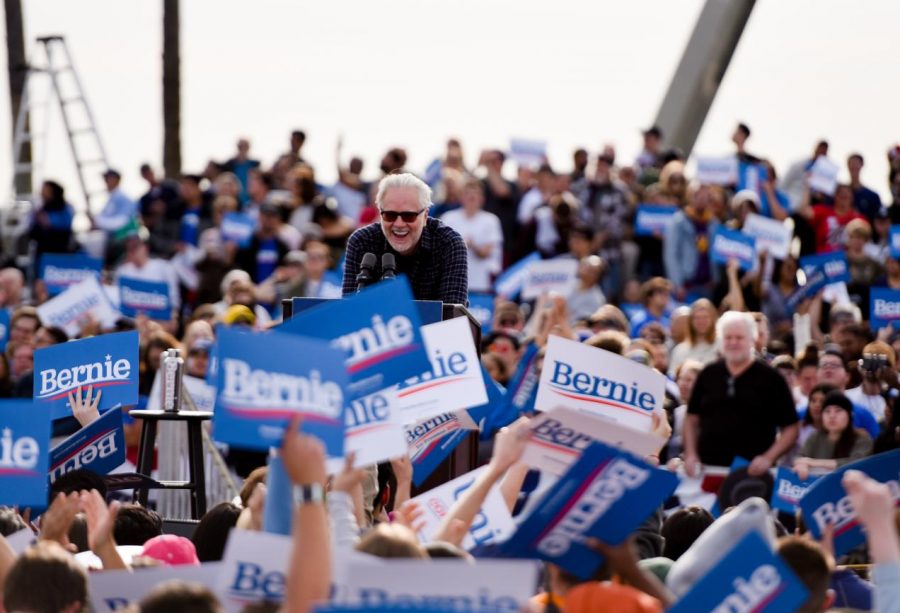 Gallery|3 Photos
Kathy Fang
Actor Tim Robbins smiles at the crowd during his endorsement speech for Sen. Bernie Sanders' presidential bid. Robbins was one of many speakers to address the crowd gathered in Venice Beach last Saturday, all of whom publicly endorsed Sanders' campaign.

In her speech, Ocasio-Cortez pointed out President Donald Trump’s recent request to increase the U.S. military budget to a value $120 billion more than in Obama’s last year of office. She argued that budgets define the priorities of a nation and questioned the importance of raising military spending or measuring a successful economy based on a skyrocketing stock market rather than wages for a struggling working class. Instead, she requested to recognize the efforts of citizens from all classes by implementing a wealth tax and a Wall Street transaction tax. 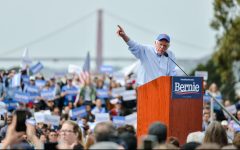 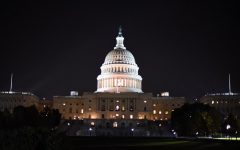 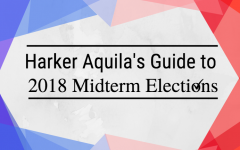 She furthered her support for grassroots donors, stating that funds from smaller donors hold candidates to different standards than those funded by corporate donors and wealthy individuals, referencing Thursday’s primary debate in which Democratic presidential candidates Sen. Elizabeth Warren and Pete Buttigieg disputed over the validity of major donors, with Buttigieg accusing Warren of performing a “purity test” on his campaign funding. Like Sanders’ campaign for the presidency in 2016, Ocasio-Cortez ran her 2018 campaign for Congress on a grassroots level, refusing to take donations from political action committees and other lobbyist groups.

“For anyone who accuses us of instituting purity tests, it’s called having values,” Ocasio-Cortez said in her speech. “It’s called giving a damn. It’s called standards for your conduct to not be funded by billionaires. To be funded by the people.”

In her speech, Ocasio-Cortez also promoted Sanders’ campaign as an inclusive movement for an integration of all causes that will extend beyond one presidential term.

As for how Sanders distinguishes himself among the 15 presidential candidates, Ocasio-Cortez pointed out his climate plan and approach to foreign policy. She cited recent climate catastrophes, warning that the Australian bushfires could become a normal occurrence in the future and calling for recognition of climate refugees. Sanders has announced that if he is elected, he will implement the Green New Deal proposed by Ocasio-Cortez and Sen. Edward J. Markey in February of this year. In terms of diplomacy, she championed Sanders’ commitment to preventing war and prioritizing human rights.

Throughout her speech, Ocasio-Cortez drew attention to the meaning behind Sanders’ campaign slogan, “Not me, us,” and she emphasized not only Sanders’ dedication to driving a grassroots campaign but also her own determination to continue fighting for all Americans, including and especially the working class.

Ocasio-Cortez closed her speech with a reaffirmation of her trust in Sanders, assuring the crowd that “a candidate that is accountable to small dollar donors is fundamentally differently aligned than anybody else.”

With that final flourish, she set down the microphone as Sanders strolled to the stage with John Lennon’s “Power to the People” blaring through the speakers, and a wave of blue once again clouded her bright red dress. 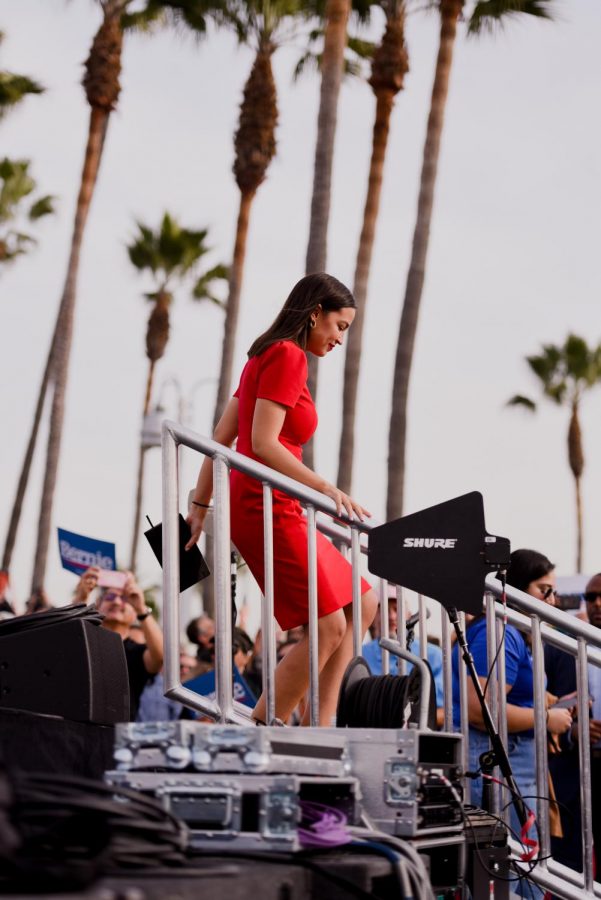