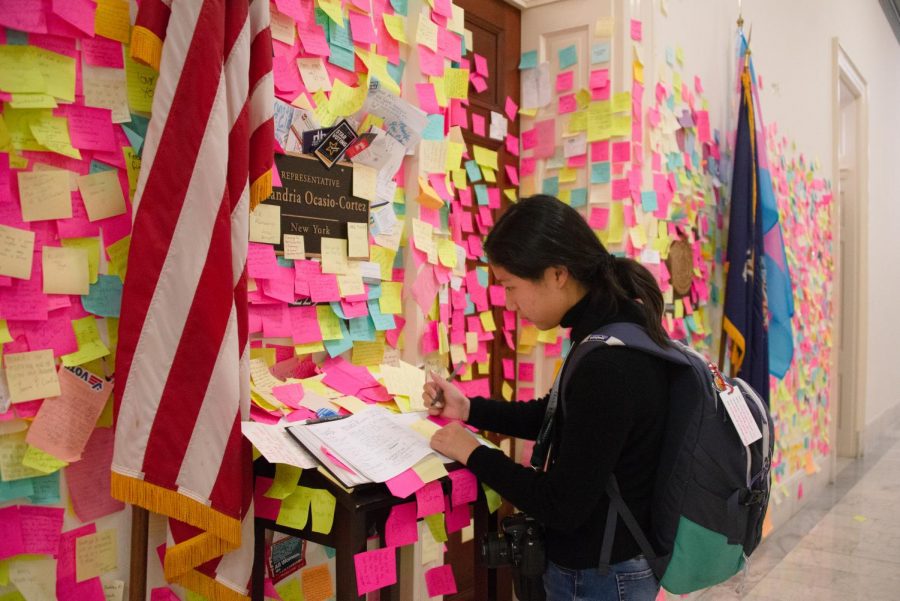 Nicole Tian (10) writes a message on a Post-It note to add to the mural of Post-Its around Rep. Alexandria Ocasio-Cortez’s (D-NY) Cannon office door.

From the Capitol to Cortez: Our quest for interviews

WASHINGTON, D.C. – The gleaming white dome of the Capitol towered above us, sparkling in the morning autumn light. Groups of visitors dotted the lawn opposite the seat of Congress and posed on its marble steps, their eager tourism unperturbed by the armed police patrolling every entrance and exit. Circling around the front of the building, each set of imposing doors were cordoned off, whether they be under construction or laced with a velvet rope railing kindly offering access to “Members Only.”

We were on a mission: Our eyes were set on obtaining the coveted congressional press credentials that would allow us access to Speaker of the House Nancy Pelosi’s (D-CA) press conference at 10:45 that morning, which closely followed U.S. ambassador Gordon Sondland’s pivotal testimony in the impeachment hearings on Wednesday. We wanted to be in the room where news happened, but for the time being, we were lost.

After circling the Capitol around and back again, we found the public entrance to the Capitol tucked away at the foot of a staircase. Briefly held back at security by unknowingly bringing along two water bottles, we finally pushed through two sets of glass doors and found ourselves standing above the Emancipation Hall in the Capitol Visitor Center.

We cautiously approached the appointment desk to inquire after press credentials and were told to contact Pelosi’s office directly, which we did, but the office redirected us to the Capitol’s press gallery, who then rejected our request and instead redirected us back to Pelosi’s office. After a series of circuitous calls between offices and representatives in a chaotic game of phone tag, we decided to chase after our credentials in person and find the press officers themselves.

Rushing across the street to the Longworth House Office Building, home to the impeachment hearings and the location of one of Pelosi’s multiple offices, we were once again screened by a sensitive metal detector suspicious of a phone. Pushing through the hordes of tourists and vigilant guards, we strode as confidently as possible to Pelosi’s workroom, the last of offices on the second floor.

Rather than finding the Speaker at her desk, we had yet another conversation with a staffer, who offered another number—this time, the number of Pelosi’s press office—to call, which we did, although to no avail.

If journalism has taught us one lesson, it would be how to pivot when we run up against dead ends. Upon hearing Pelosi’s media representative Joe Costello’s answer that no, we would not be able to cover the press conference, we decided to turn next door and visit the Cannon Office Building, where we knew freshman representative and rising star Rep. Alexandria Ocasio-Cortez (D-NY) housed her office.

We found her office immediately. It wasn’t hard: The walls around her office’s door and even the door itself was covered with bright Post-it notes that bore messages to the representative, many of love, support and gratitude. Five notes spelled out “Q-U-E-E-N,” another encouraged “BX represent” while others thanked her for inspiration or urged her to champion various causes.

Hopeful for the possibility of an interview with the staffers, we stepped inside the office and were met immediately with a small Lightbox that read “NY-14 Bronx,” paired with a map of Ocasio-Cortez’s district in New York, and a glass jar filled with packets of Starbursts and Skittles. A young staffer with curly shoulder-length hair and large glasses greeted us, and we informed her of our hopes. A wooden door set behind the front desk, following a common layout of previous offices, stood closed, and its golden doorknob caught the daylight.

Just as we spelled out the “q” in Harker Aquila for the staffer at the front desk, the door behind her opened, and Ocasio-Cortez herself casually stepped into the small waiting area. Dressed in a checkered tan suit, a smile graced her face as she eagerly walked over to us, preceding to shake our hands as we stumbled through our introductions, barely able to contain our astonishment. Letting ourselves slip for a moment from the viewpoint of a composed reporter, we put our hearts to words and voiced our admiration for the young congresswoman, who smiled and graciously laughed at our enthusiasm.

We had entered with the goal of interviewing a staff member and left in an astounded haze—unfortunately so much so that we had missed the opportunity of snapping a photograph of Ocasio-Cortez.

Despite the missed moment, we were inspired by the brief meeting to set our resolve on chasing the possibility of an interview with the congresswoman. In order to obtain interviews with the staffers, we were required to contact the office’s communications director, who was regrettably stranded on vacation. Over the next day, we relentlessly contacted the communications team from two different phone numbers and two different emails.

After exchanging interview requests and logistics for the House of Representatives, we were told by a staffer that the next open slots would be delayed until December, possibly at her district office in New York, since we had met her on the last day while Congress was still in session. And though we lost the chance for an interview on this trip, we will nevertheless continue chasing our goal with even the hint of a hope.