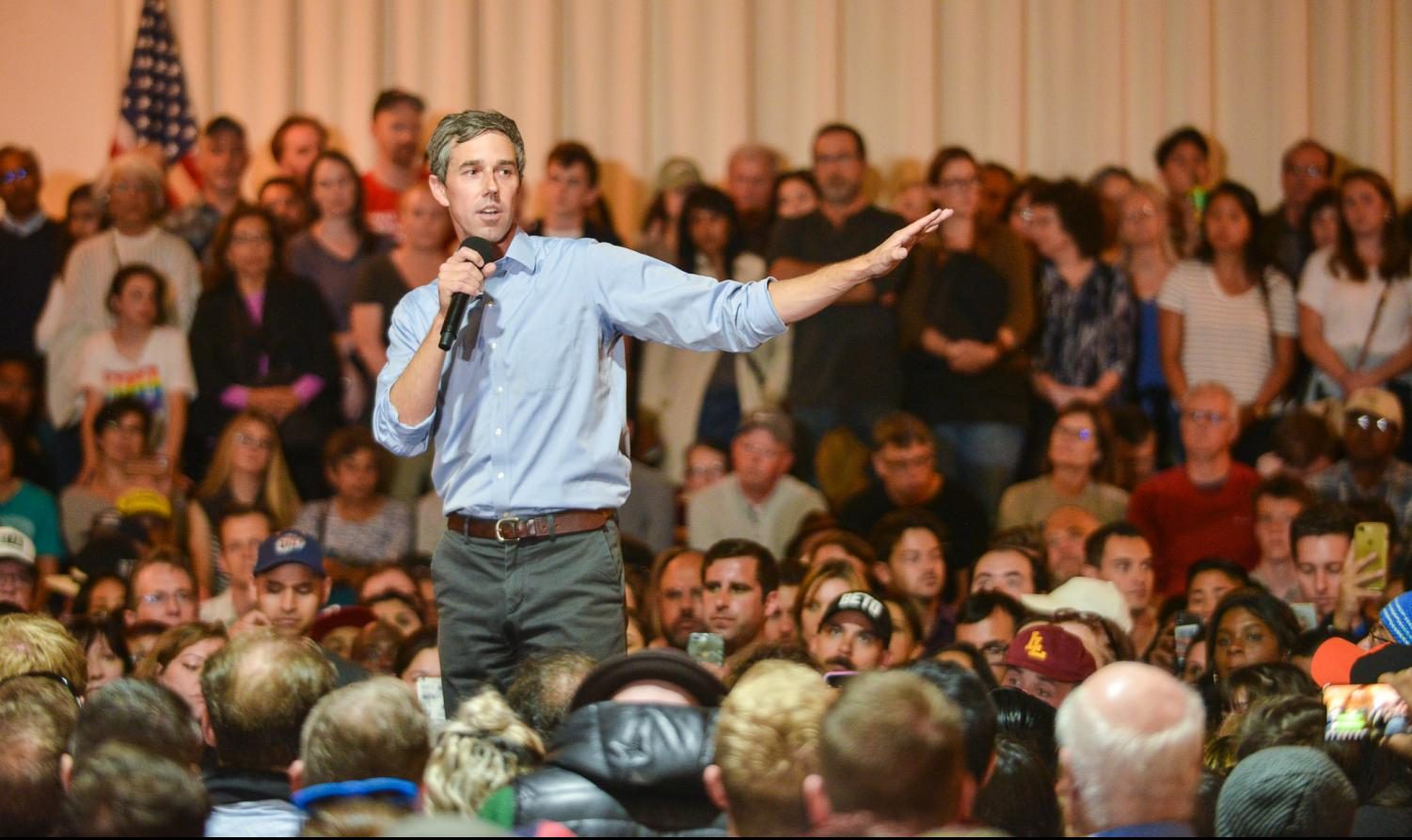 Former Rep. Beto O’Rourke addresses a crowd of supporters and voters at a town hall event in San Francisco this afternoon. O’Rourke announced his bid for the presidency on March 14 and made his first stop in the Bay Area today. (Kathy Fang)

Former Rep. Beto O’Rourke addresses a crowd of supporters and voters at a town hall event in San Francisco this afternoon. O’Rourke announced his bid for the presidency on March 14 and made his first stop in the Bay Area today.

by Kathy Fang and Eric Fang

Presidential candidate and Democratic rising star Beto O’Rourke traveled to the Bay Area to host a town hall at the United Irish Cultural Center in San Francisco this afternoon.

Introduced by Rep. Jared Huffman (D) of California’s 2nd district, O’Rourke opened the event with an overarching campaign statement that promised progressive reform in national issues, from immigration to climate change, before inviting audience members to ask him questions about his stance on various policies.

After a close defeat in the 2018 midterms, losing by 2.8 points to incumbent Sen. Ted Cruz (R), former Rep. O’Rourke is back in the race. His campaign for the presidency, which was announced on March 14, builds off of the platforms that shaped his bid for the Senate last year, largely centered around issues of immigration, gun control, healthcare, climate reform and policies to build what he calls a “true economic democracy.”

“It’s going to take all of us, and this is our moment to decide how we will be defined,” O’Rourke said in his town hall opening speech. “We’re not going to be defined by our smallness, our pettiness, our hatred, or our racism. Instead, we will be known for our ambitions, our aspirations, the work, the service, the sacrifice we’re willing to bring and bear to get them done.” 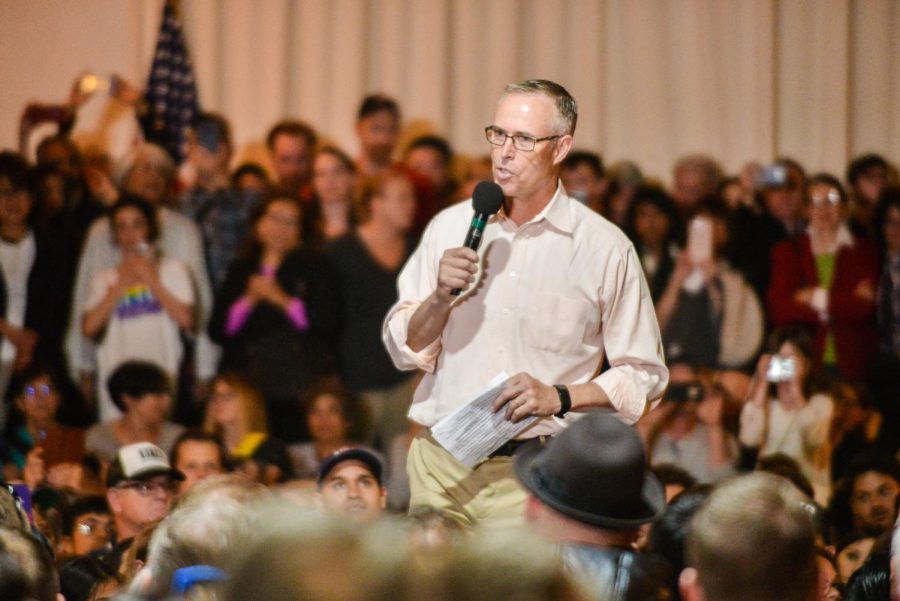 His speech today covered numerous policy proposals, including a new voting rights bill, ratification of the Equal Rights Amendment and a “Medicare for America” healthcare plan. O’Rourke also pledged to rejoin the Paris Climate Accords, an international agreement to reduce carbon emissions that the US left in 2017, and pass carbon regulation measures for government leases and purchases.

“Just maybe, we can take our role as the indispensable nation, convene the powers of the planet, bring them together to do the otherwise impossible and save not just this generation, but every generation that comes,” he said.

In addition to rejoining the Paris Climate Accords, O’Rourke also pledged to oppose the construction of the Keystone XL pipeline in South Dakota. The Trump administration authorized the pipeline’s construction is 2017 despite it possibly endangering local water supplies and violating indigenous land rights.

“There were a lot of tough questions and he answered those questions with very specific stances and that makes me very happy,” town hall attendee Paul Fritzsche said. “I think he is an effective communicator, something that we really need.”

Like many other Democratic presidential candidates, O’Rourke has renounced corporate and PAC funding for his campaign, stressing instead the importance of grassroots mobilization that involves contributions from individual supporters. As a whole, O’Rourke has adopted an anti-PAC stance that has now become mainstream in the Democratic Party, especially after Sen. Bernie Sanders’ 2016 presidential campaign.

“How is it that we allow members of Congress to choose their voters, we allow money to buy influence and increasingly outcomes in our elections, in our legislations—a Supreme Court in 2010 that decided that corporations are people, money is speech, and corporations can spend unlimited amounts of money to purchase the outcomes our elections, to define  the policies that are at odds with our lives?” he said.

As a relatively new member to Congress who has galvanized many progressive Democratic voters in his home state, O’Rourke presents himself as a voice of hope and reform. Part of his appeal is his authenticity and relatability, whether it be speaking about national issues at taco restaurants or referencing his former involvement in a punk rock band.

“He can talk to people about the issues that they care about, without trying to compromise or lie, or trying to please everybody. He’s very honest,” said town hall participant Chris Johnigan, who asked O’Rourke a question regarding police brutality and accountability this afternoon.

O’Rourke first entered national politics in the 2012 elections, when he won the House seat for Texas’ 16th district by defeating eight-term incumbent Silvestre Reyes (D). Since then, although O’Rourke continues to voice his support for popular Democratic stances on immigration reform and healthcare, his voting record in Congress has leaned more conservative than many of his progressive colleagues.

As O’Rourke moves forward in the primaries race, he continues to build off of his momentum from his 2018 campaign while endorsing popular progressive platforms to expand his voter base.

“He had a lot of support for his Senate race in Northern California, a lot of people volunteering, so I think they were very happy to have him here,” said town hall attendee Susan Pfeifer, an undecided voter. “And then there were other people like me who are just curious. With 20 other candidates to choose from, we’re window shopping right now.”

Largely inspired by his experience as a grassroots Democrat in a mostly Republican state, O’Rourke emphasized the value of joining together to combat common national challenges.

“I don’t care to whom you pray, or who you love, how many generations you’ve been in this country, or whether you just got here this morning. All that matters to me is we are Americans first, we have these challenges before us, and we will overcome them,” O’Rourke said.