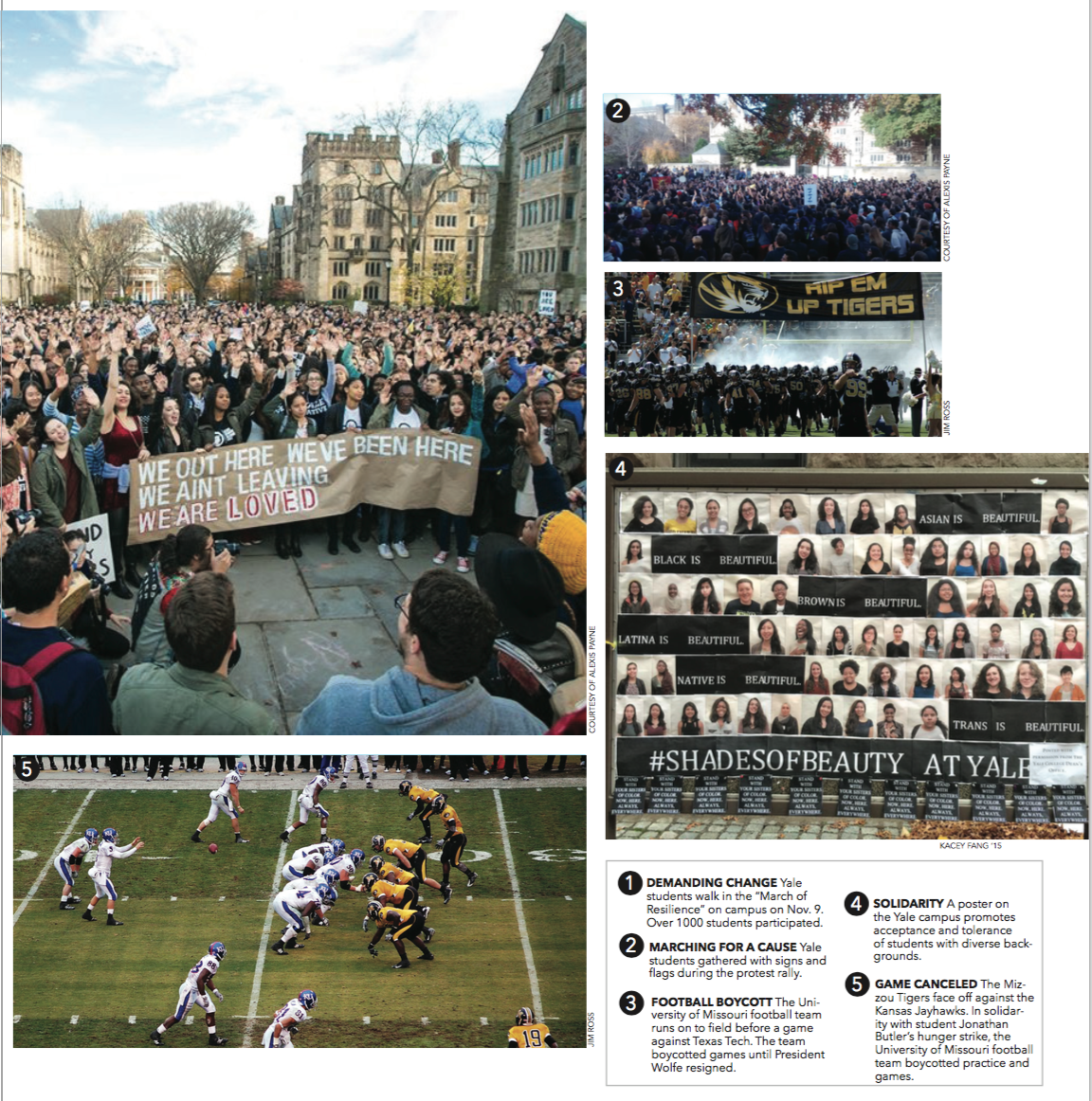 Amid allegations of administrators failing to address racial concerns, universities across the nation, most notably the University of Missouri and Yale University, have become centers of student protests regarding the treatment of students of color in the past several weeks.

Racial tensions began to boil over in September at the University of Missouri when Student President Payton Head shared an experience of racism on campus in a Facebook post, describing an incident in which unidentified people yelled racial slurs at him. Over the weeks following his post, university administration left multiple protests and other racially charged incidents unaddressed.

On Oct. 20, the group at the heart of the protests, Concerned Student 1950, named after the year the university began accepting African-American students, demanded that University of Missouri President Tim Wolfe step down for not appropriately addressing student concerns. Wolfe continued to remain silent, not meeting with members of Concerned Student 1950 until Oct. 26 and waiting until Nov. 6 to issue an apology for his inaction.

“In my opinion, this is black students on campus finally saying enough is enough, we have to do something to make this better,” Mark Janda, history teacher and University of Missouri alumnus (‘92), said. 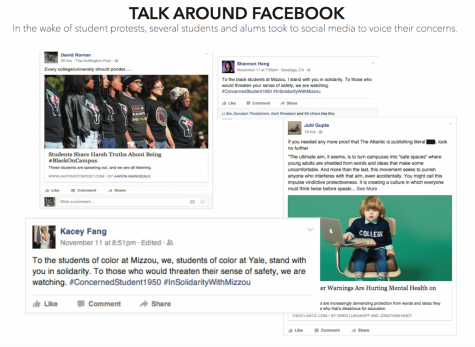 Six days later, the University of Missouri football team, supported by coach Gary Pinkel, announced they would not participate in any practices or games until Wolfe resigned. The team was slated to play Brigham Young University the following Saturday, and a forfeit would mean that the university would be forced to pay $1 million to BYU. Wolfe resigned the next day.

Yale University: Debate ignites over coexistence of freedom of speech and safe spaces

ilar changes from their administration this fall.

The Yale Intercultural Affairs Committee sent an email the week before Halloween asking students to avoid wearing culturally-offensive costumes.The request in the email was met with debate from some members of the

community who felt that it was not the job of the university to manage or restrict the personal actions of its students.

Erika Christakis, faculty member and associate master of Yale’s Silliman College, sent out a reply to students in her residence building three days after the original email from IAC.

“Is there no room anymore for a child or young person to be a little bit obnoxious… a little bit inappropriate or provocative or, yes, offensive?” she wrote. “American universities were once a safe space not only for maturation but also for a certain regressive, or even transgressive, experience.”

Her remarks have spurred debates regarding the relationship between freedom of expression and cultural sensitivity.

“If she was truly cognizant of the pain people of color have had to endure, she should

not have valued the freedom of expression over cultural sensitivity,” Yale fr

Many students have expressed their outrage by participating in large demons

trations on campus. On Nov. 9, over 1,000 students marched across the college in a protest dubbed the “March of Resilience.”

On Tuesday, high school students in the process of applying to Yale with the Common App received an email from the Yale Dean of Undergraduate Admissions that provided insight into the recent events on campus. It expounded on the value Yale places on diversity in “culture, socio-economic background, thought, perspective and experience” and assured students that concerns about creating a more supportive environment would be addressed.

“It’s important to note that what has happened at Yale in the past weeks are not a reaction to a Halloween email or a frat party, but to long-term, systemic problems with race on campus,” said Kacey Fang (‘15), a freshman at Yale and former Managing Editor of the Winged Post. “People of color have been bringing up these issues for years, and I’m glad to see that so many other campuses have started similar movements or shown solidarity.”

Dozens of other colleges across the nation, including Wesleyan University, Brown University, Stanford University and Columbia University, quickly showed solidarity for their peers by hosting rallies.

On the Harker campus, current students have joined in the conversation by posting messages of support on social media and voicing their thoughts on the situation.

“It’s somewhat outrageous that instances like these are still occurring,” Jadan McDermott (10)  said. “This is not merely a recent cry out from black people, because we have been crying out for over 30 years.”