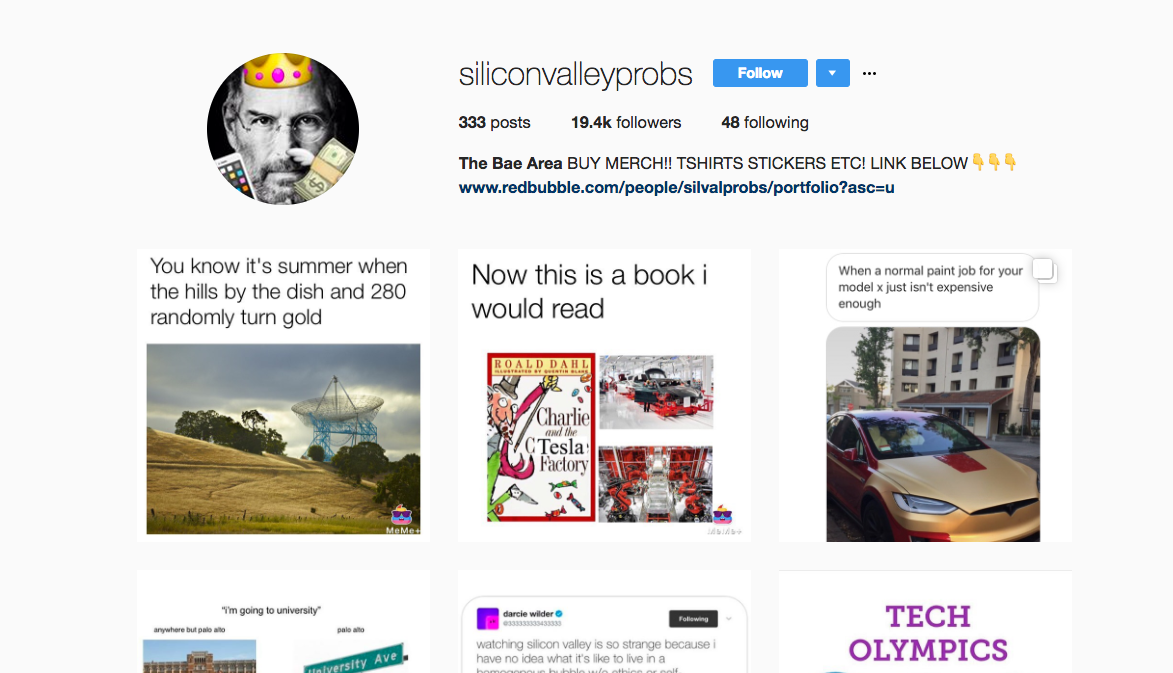 Ah, Silicon Valley. To the rest of the world, it’s the hub of the West Coast, a tech-mogul metropolis buzzing with innovation. To Valley citizens, it’s a place to called home–quiet suburbs, clean streets and a reliable school system. To the administrators of renowned Instagram meme account “Silicon Valley Probs,” it’s inspiration.

Silicon Valley Probs’ founder launched the page in fall of 2016, with another administrator joining the account a few months later. From the account’s humble beginnings to its newly minted virality, the minds behind the content have committed themselves to delivering high-quality memes and text posts revolving around themes exclusive to the Bay Area and, specifically, Silicon Valley.

“We all have this one thing we relate to- that we live in this area, Silicon Valley,” Silicon Valley Probs, who asked to be referred to by their username along with “they/them” pronouns due to privacy concerns, said. “The majority of us, either from a sense of reality or irony, can relate.”

Relatability is one of the primary qualities upon which the administrators of the account base the majority of their posts. From technology tropes to foodie trends, the meme page provides its readers with a plethora of content that Silicon Valley natives–particularly high school teenagers–can resonate with.

The most common type of meme the account posts is a photo accompanied by a witty caption in a style reminiscent of Twitter. These memes are known as text-posts, but fun video clips and Snapchat screenshots are also regularly uploaded. The administrators post a combination of original and fan-made content to maintain viewer interactivity and to involve followers in Silicon Valley meme culture.

“I have a shared folder with the other account owner and it’s a shared icon folder with a couple hundred pictures, and we get feedback from each other. We also get a lot of direct messages- fifty percent of the things we post are submission based, and a lot of time what we’ll do is we’ll recreate the meme and keep the content,” they said. “There isn’t a lot of thought process that goes into it- we want to post things that are relatable. If it makes me laugh [and] if I think it’s funny, then I’ll post it. We try not to take ourselves too seriously.”

According to the U.S. Census Bureau, Silicon Valley has the second-highest concentration of wealth in the country. One of the main aspects of the area that the account pokes fun at through irony is the privileged lifestyle commonly associated with those who live in Silicon Valley.

“I’ve lived in this area my entire life and I’m not a pessimistic person, but I certainly have racked up a great deal of frustrations and criticisms about the area that we live in. I think that I often approach my day to day life looking at the irony,” they said. “A lot of the posts that I create serve to be a reminder of how privileged we are to live here. We live in an incredible place and I think a lot of the things that I try to make serve to point out the things that we all take for granted.”

While the owners of Silicon Valley Probs have been able to make their readers laugh with their content that pertains to many Bay Area teenagers, they have also been able to raise awareness about causes important to them through their social media presence.

In April, one of the co-administrators uploaded a screenshot urging followers to take action in regards to a group of shelter dogs that would be euthanized unless they could find a foster home in time. The post garnered nearly 1,500 likes and just one day later, the administrators learned that the shelter would provide an extension and that approximately 65 people conveyed their interest in fostering the dogs.

“That was so rewarding,” they said. “It’s when people come together. We have a really nice community of followers.”

Moreover, the account has been raking in merchandise sales with proceeds intended for charity.

“It’s very rewarding in ways that I wouldn’t have imagined it to be rewarding,” they said. “I want to use the fact that I have a wide reach in this area for good.  Likes and comments are awesome but they also don’t do anything for the world. Being able to get my dogs into foster homes and being able to donate to my favorite charities is rewarding. Helping people- that’s what I’m excited about.”