Pulse of the People: Biden-Harris and the promise for change

by Alysa Suleiman and Arely Sun 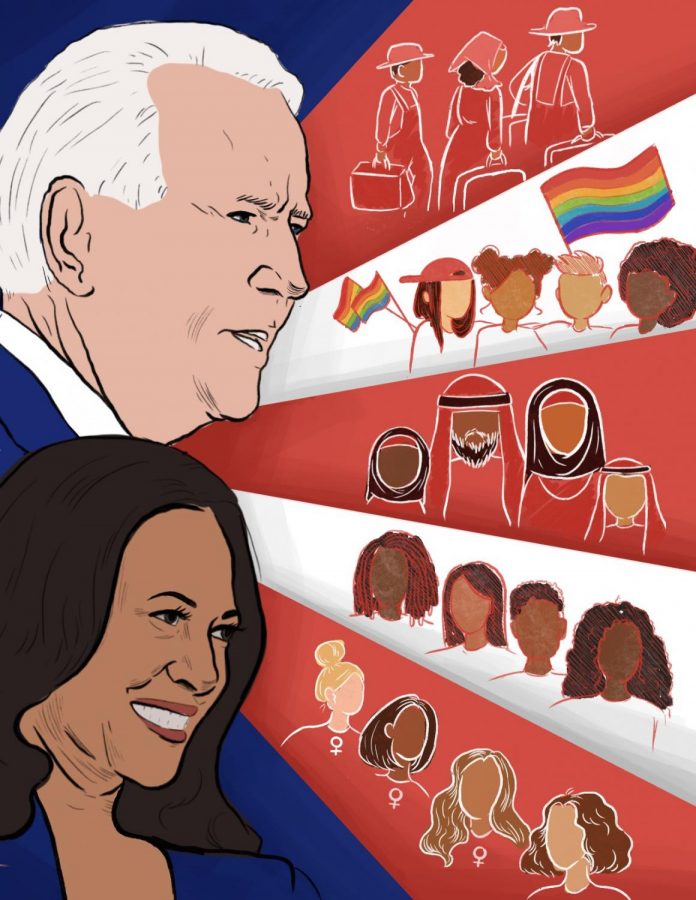 President-elect Joseph R. Biden and vice president-elect Kamala Harris’ win on Nov. 7 brought about the possibility of increased representation for marginalized communities. The last four years have exacerbated discrimination and underrerpesentation for groups such as Latinx, Black and LGBTQ+ communities, but Biden’s administration signals potential changes for the better.

On Election Night, Jeannette Fernandez, a Latina and upper school math teacher, recalls sitting in her living room, watching with bated breath alongside millions of other Americans as the nation collectively waited for the numbers to climb higher, by the second, then minute, then hour. Over the next few days, she reloaded the results again and again as the blue electoral vote numbers rose, before finally flicking to over 270. Immediately, Fernandez texted her father and two sisters as her family, all “big supporters,” celebrated Biden’s victory.

President-elect Joseph R. Biden and vice president-elect Kamala Harris’ win on Nov. 7 brought about the possibility of increased representation for marginalized communities. The last four years have exacerbated discrimination and underrepresentation for groups such as Latinx, Black and LGBTQ+ communities, but Biden’s administration signals potential changes for the better.

For instance, Biden, who won the most number of American votes in the history of the United States presidential elections, managed to flip numerous historically Republican states, such as Arizona and Georgia. In Arizona alone, Biden secured 11 electoral votes, beating Trump by 0.92 percentage points compared to Trump’s 3.5 percentage point win in Arizona in 2016. According to the AP, Arizona’s changing demographics, specifically in Maricopa County accounting for 60% of the state’s votes, led to a surge of Latino and young voters to help turn the state for Biden.

Despite Biden’s campaign promises to the Latino community, such as expanding affordable healthcare and education access as well as immigration reform, results from the 2020 election show that Latino voter turnout was also much higher for Trump in Florida and Texas, both historically Republican states. Miami-Dade County in Florida, a largely Cuban-American community, only gave Biden a victory by seven percentage points in comparison to 2016 Democratic presidential nominee Hillary Clinton’s 30-point victory in the same region. Similarly, in Texas, Trump attracted thousands of new supporters near the southern border.

Fernandez, who has “very conservative” family members living in Texas, believes that the higher Latino voter turnout for Trump in Florida and Texas were in large part due to the Catholic faith deeply rooted in Latino culture, which upholds many conservative values such as opposing abortion and same-sex marriages.”

I am hopeful that this new administration starts working towards bringing some unity, and that they will eventually see that it shouldn’t be about the right versus the left but just about bringing the country together and doing what’s best for the entire country.”

“There’s huge Catholic or Christian communities in Texas and Florida, so they tend to vote with that in mind,” Fernandez said. “Personally, although I no longer attend church that frequently, I know that my church sent out an article about how we should choose a president that will bring an end to abortion and promote traditional family unity in our communities.”

During his presidency, Trump’s plan for immigration reform included increased border security funding and ending the diversity visa lottery, as well as restrictions on family-based immigration. Fernandez identifies her attitudes toward Trump’s stance on immigration and the border crisis to be “extremely negative.” She feels fortunate that, in the past few years, she herself did not experience hate speech, although she knows Mexican-American friends who have commonly heard phrases like “go back to your country” or “we don’t want Mexicans.”

“Instead of coming up with solutions to help make it easier for somebody who wants to cross over to work or go to school, [Trump’s policy] was geared towards, in my opinion, hate and a lot of generalization and bad stereotypes,” Fernandez said. “If the president is saying these things, then it seems okay for all of us to, and it’s not.”

She recognizes that many people hold a fear of undocumented immigrants and the issues that come with the immigration process, but she also emphasizes that Trump’s solutions did not improve unification. In 2019, Immigration and Customs Enforcement (ICE) arrested approximately 143,000 migrants and removed more than 267,000. Within the detention centers, ICE has separated children from their parents and performed questionable surgeries on female detainees.

“Having borders or making it about having this huge wall is not the right solution. I think there needs to be a lot of communication with the U.S. and other countries to bridge that gap and make it more positive because the US is not necessarily viewed in a good light right now,” Fernandez said.

In his campaign, Biden vowed to undo Trump’s immigration policies involving the border wall and reestablish America as an asylum for refugees. To do so, he proposed a modernized immigration system with effective border screening as well as a more proactive approach to target the reasons for irregular migration.

Despite initially celebrating Biden’s victory, Fernandez believes that Biden’s next four years in office will be critical in providing necessary changes as well as repairing partisan divides.

“It seems that [Biden] is more willing to be a communicator,” Fernandez said. “Even though he won, it was close. There’s a tough road ahead, and there’s still a lot of work to be done, but I’m hopeful,” Fernandez said.

Biden’s message of repairing and healing from the last four years also deeply resonated with Reja Raghib (11), who is Muslim and found it difficult to come to terms with the Trump administration’s anti-immigration crusade.

“Trump would continue to promote his ethno-nationalist ideologies and further this deeply rooted ‘us versus them’ mentality, something that has been exemplified by the race riots that broke out in 2018 and also earlier this year,” Reja said. “It’s created a culture that’s led to a resurgence of widespread hatred such as homophobia, islamophobia and xenophobia, which contribute to alienating and marginalizing minorities such as the Muslim community in America.”

Trump reassures supporter that he’ll be looking into getting rid of all the Muslims in the United States: pic.twitter.com/geo3oxsV6G

In 2017, Trump issued an executive order banning travel from several mostly Muslim countries, which Reja believes exacerbates ongoing xenophobia by propagating damaging generalizations. Trump himself has also promised to “look at a lot of different things” when questioned at a rally on when he would be able to “get rid of [Muslims].”

“Compared to the [Trump] administration that believed in promoting division between various ethnicities and religious groups, I would expect to see the [Biden] administration bring America together again and rise above differences of color, gender, ethnicity and religious backgrounds,” Reja said. “I also hope that [the Biden-Harris administration] improves our alliances with other countries to promote peace and environmental policies.”

Biden’s promise of reversing other Trump policies, such as the ban on all transgender people from serving and enlisting in the military, encourages Alyssa Tomberg (11), a member of the LGBTQ+ community.

Biden’s campaign plan includes advancing LGBTQ+ equality in America by protecting LGBTQ+ people from discrimination, protecting and ending violence against the transgender community and supporting LGBTQ+ youth. She hopes that the president-elect will alleviate ongoing homophobic and transphobic sentiments.

“I’ve also heard of queer-related bullying in schools that is sort of just brushed aside or not really taken seriously, especially in public schools that are underfunded. In an ideal world, hopefully Biden’s presidency will lead to more protections for queer kids, as well as improvements for the public school system in general,” Alyssa said.

Within the next four years, she hopes for pushback against transphobia in terms of bathroom use as well as in medical discrimination, which were aggravated by the Department of Health and Human Services’ removal of health care discrimination rules that protected transgender people earlier this year.

“I would like [Biden’s] presidency to lead to there being more public gender-neutral, single stall bathrooms available because they can help decrease harassment in bathrooms as well as making queer people feel more safe,” Alyssa said. “I don’t want people that work in the medical field to be able to discriminate against LGBTQ+ people or any other minorities. Everyone should have access to adequate, unbiased healthcare.”

Brian Pinkston (12), who identifies as Black, notes the negative impact of Trump’s “racist behavior.” Trump repeatedly refused to directly condemn white supremacy during the presidential election and denounced the Black Lives Matter protests that broke out after the killing of George Floyd. As a leader, his statements and actions have immense influence on the attitudes of the general public. Brian emphasizes the need for strong leadership, especially during the pandemic.

“The Black community has been hit especially hard with COVID-19 in terms of number of cases, the number of deaths, jobs lost and all that stuff,” Brian said. “The president is supposed to be able to set the social tone, and now we have this racist in the White House who isn’t really doing much and also accelerating gentrification.”

Although his campaign promises included advancing economic mobility and closing racial income gaps for Black Americans, public doubt has arisen over insensitive comments on the Black community in support of Trump as well as Latinx and Black community diversity, comments he later took to Twitter to apologize for.

In his victory speech after the election, Biden thanked the Black community for their support and for “[standing] up again for [him].” Though Biden promised to have their “back,” Brian is not overly hopeful about the next four years as he doesn’t believe that Biden possesses a substantive plan to provide the necessary changes to support the Black community.

Despite this, many see vice president-elect Kamala Harris’s success as the first woman of Black and South-Asian descent to fill the role in the history of the United States as an important moment of representation.

“It’s encouraging to see a female rise to the vice president position since it’s never been accomplished before,” Reja Raghib (11) said.

Though the fact itself is a groundbreaking milestone, some still find issues with Harris’ past as a prosecutor, as seen in a previously written bill allowing for private police investigation in prosecution. Brian finds Harris’ stance on race-based issues to be contradictory and that the negatives of her push for potential policies outweigh the positives of her inherent representation of marginalized ethnic groups.

“[Harris] was a prosecutor for most of her life–she put innocent people in jail for marijuana convictions, and now she wants to claim the liberal stance of ‘we need to rehabilitate rather than criminalize everything,’ when that hasn’t been her stance all along,” Brian said. “Sure, it’s good for representation, but in actual practice, it probably won’t be good.”

Nonetheless, many view the 2020 election as the first step in healing democracy and the nation as a whole. Fernandez, whose daughter Sofia Fernandez (12) turned 18 on Nov. 2 and voted in the election, felt emotional and proud that Sofia could “voice her opinion and make her vote count.”

“I am hopeful that this new administration starts working towards bringing some unity, and that they will eventually see that it shouldn’t be about the right versus the left but just about bringing the country together and doing what’s best for the entire country,” Fernandez said.