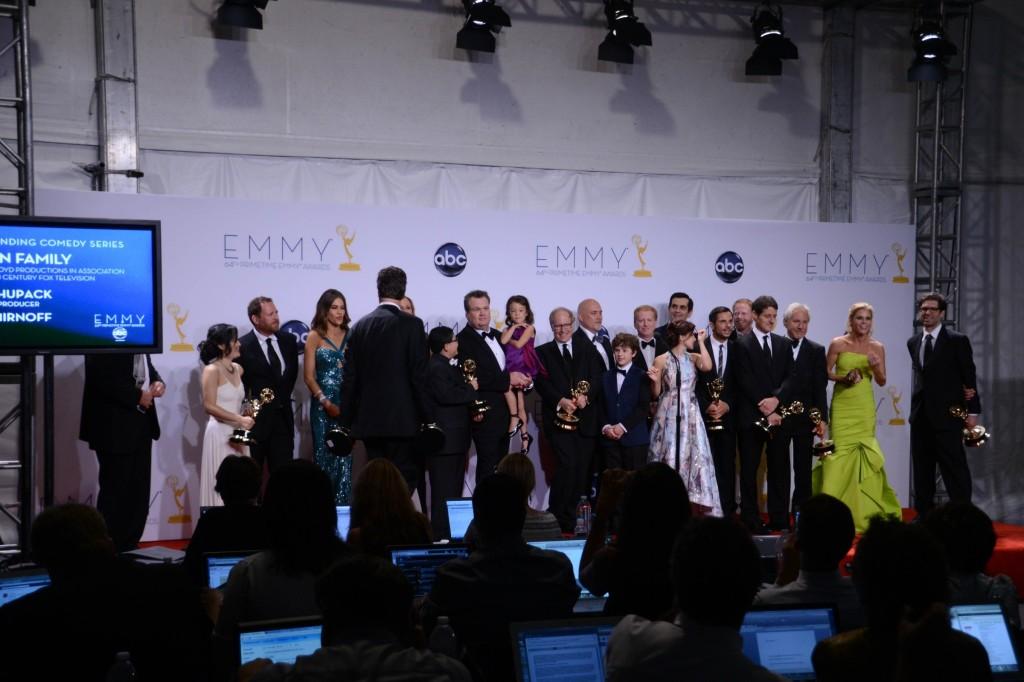 The Cast of Modern Family answers questions in the Media Press Room during the 64th Annual Primetime Emmy Awards after winning the Emmy for Outstanding Comedy Series.

The hit ABC series Modern Family’s third season premiere on Wednesday reminded us exactly why it won this year’s Emmy for best comedy.

Last season’s finale had left us on the edges of our seats, wondering how the entire family is going to react to Gloria (Sofia Vergara)’s unexpected pregnancy, and in the premier, that question is answered while drawing out laughter and tugging on heartstrings.

The audience reunites with the three families more or less where the previous season left off. Mitchell (Jesse Tyler Ferguson) and Cameron (Eric Stonestreet) are trying to get over their adoption flop by attempting to adopt a kitten. Jokes about aging set the scene for Jay (Ed O’Neill)’s 65th birthday, while Gloria struggles to tell her husband about her big news. Everyone’s favorite oddball, Phil (Ty Burrell), attempts yet another one of his wild ideas, as he and two friends kidnap the reluctant Jay to go for a surprise celebration: fishing. As expected, with Phil around, the trip does not go smoothly for his father-in-law, but it greatly entertains the audience nonetheless.

A successful season opener, this episode is filled with everything we had dearly missed over summer: Gloria’s charm, Cameron’s histrionics, Manny (Rico Rodriguez)’s precocious soliloquies, Phil’s quirks, and Claire’s snarky comments. As usual, the show has us laughing from beginning to end and keeps us thoroughly amused with its witty, well-timed jokes.

Yet the premiere moves beyond the Modern Family’s typical, purely comedic entertainment with a heartwarming ending that stressed the importance of family and living in the moment without regrets. Though the show could have transitioned into the flash-forward portion in a clearer fashion, this minor setback does not detract from the overall quality of the episode.

The show’s strong lead into its third season has definitely set the bar high for the rest of its episodes.