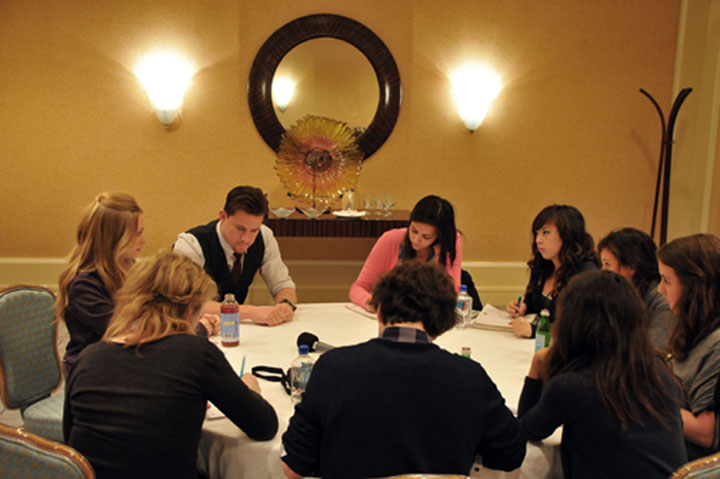 “Just follow the screaming.” The woman behind the counter smiled and pointed to the escalator. I couldn’t help but feel a tingle of trepidation before stepping up the stairs. We could hear the low murmur of voices before rounding the corner, and then we were met with the sight of a huge crowd of girls and a synchronized cacophony of the chant: “CHANNING! CHANNING! CHANNING!”.

Earlier that day, Mahum Jamal, and I had driven an hour from school to head up to San Francisco for a special interview with Channing Tatum and Amanda Seyfried – star actors of the new film “Dear John”. Few opportunities like this had ever arisen before for a yearbook staff member, so when I was offered a spot I jumped at the chance.
We left school early to make the 3:15 interview. I hardly felt nervous – what were the chances that this interview would actually happen? 1 to 100 right. Once we reached in the lobby of the hotel, a publicist met us. I heard her whisper to our advisor: “They’re exhausted, they’ve been interviewed all day. We’re running a little late.”

She led us into a smaller room with a couple other students seated around a table – I glance at Mahum. Could this actually be happening? We took seats at the table and tried to make casual small talk with the other students. Every time a door opened, the group seemed to jump. The anticipation and tension built up until it was almost unbearable.

Finally, the door opened. Channing Tatum walked in, a broad smile on his face: “Hi! I’m Chan!” he announced as he held out his hand to each of the student journalists. Amanda followed after him, slightly less energetic, and took her spot at the table. I was in shock; I couldn’t believe this interview was actually happening. We immediately started pelting them with questions about their roles in the new movie as well as queries about their personal lives. Surprisingly, they turned out to be pretty normal people. Tatum revealed that he is starting a new website postthelove.com while Seyfried revealed that she likes knitting during her free time.

As soon as they were done they were rushed out, and we ran to Macy’s to cover this public relations event. Fans of every age held pens and posters awaiting their idols to sign them. When they finally arrived the crowd roared with excitement. I quickly snapped a couple shots, and we escaped before the crowd could consume us.
On the ride back, I reflected on this opportunity. Living the life of a journalist was exhilarating; I had previously limited myself to only Yearbook related subjects. But broadening my horizons and taking advantage of my status as a journalist certainly had its benefits.