So you want to be a… Guggenheim award-winning artist? 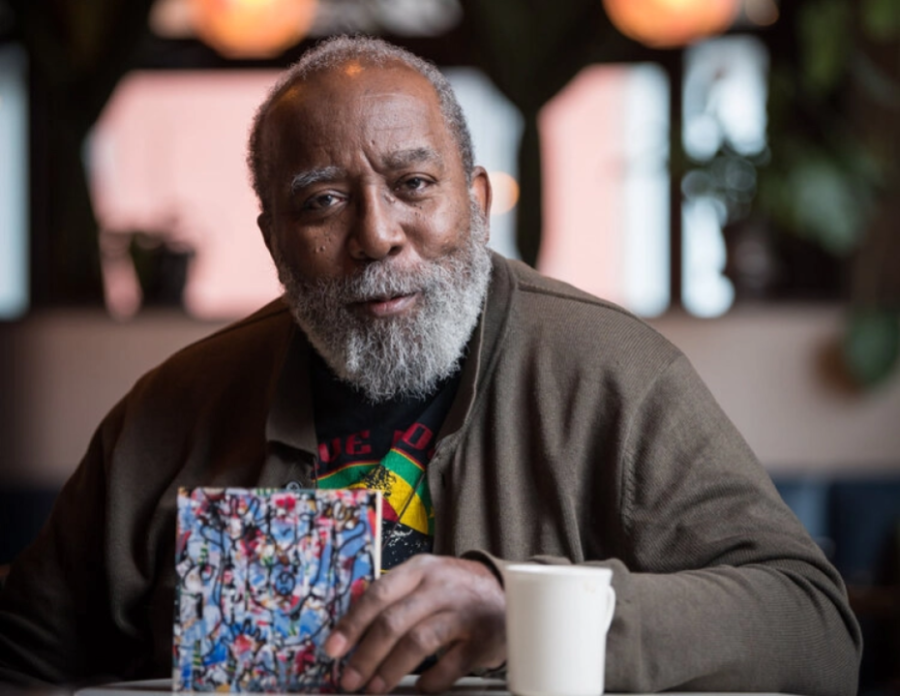 Visual Artist Ta-coumba Aiken poses with one of his works. Aiken was awarded a 2022 Guggenheim Fellowship Award recognizing him for his work in dynamic art, specifically spirit writing and rhythm patterns.

by Sally Zhu and Sarah Mohammed

When Ta-coumba Aiken got the phone call announcing his Guggenheim Fellowship Award, he didn’t believe it at first. Aiken had applied for the award eight times previously, but in April 2022 he received the prestigious prize, in the Fine Arts category.

The Guggenheim Memorial Foundation recognizes artists and scientists throughout the nation, and 180 fellowships were awarded in April of this year. The foundation selected Aiken out of 2500 other applicants in the Fine Arts category, recognizing him for his work in dynamic art, specifically spirit writing and rhythm patterns.

Aiken described finding beats in art, similar to the beats in music and jazz, building together to form a rhythmic pattern. Aiken found these styles in indigenous culture, with spirits of different types of music, and used these abstract dances of beats and flows to create art. His work often involves bright colors and dancing lines, filling space and color.

“I just started trying to figure out why certain things were popular and why other things weren’t,” Aiken said. “So I based on music, and cultural music from different places, and then noticed that there was this constant regular beat, and that became the rhythm pattern. That was the spirit of it.”

Aiken started creating art at three years old, in his Illinois home in the 1950s, and he presented his first art exhibit in the house’s basement at age six. Pricing his art and inviting neighbors to come, Aiken started attracting other buyers, and he ended up gathering $657.36 from that first exposition.

Aiken’s passion for visual art continued, and he attended the Minneapolis College of Art and Design, residing in that city for many years since. Aiken started doing illustrations such as for set designs and posters for shows, to make a living, before making a name for himself and starting public art in Minneapolis. Years later, after receiving the Guggenheim award, he still is grateful for just being alive and the success of his art.

“People say, ‘Oh, you deserve this, blah, blah, blah,’” Aiken said. “I’m like, I work every day, I paint and draw and do whatever I can do for our community every single day. So what I deserve is to be able to breathe and be thankful for breathing, and anything after that is icing on the cake. But I was exceedingly grateful to be recognized.”

One such example of Aiken’s public art was his Guinness World Record-winning Lite-Brite mural, in which he assembled 596,000 Lite-Brite pegs that light up in bright colors. The mural won the record for Largest Lite Brite Picture, and was designed by Aiken with funding from the Forever Saint Paul Challenge and St. Paul Foundation, as well as help from the public.

“I had something like 600 volunteers, some were homeless, and some were district court judges and senators, and I got all these different people from all different walks of life working on it,” Aiken said. “So I guess I’ve been just mimicking my life through my art all this time.”

Other examples of Aiken’s public art include a mural etched in glass in St. Paul and various sculptures in cast bronze at the Minneapolis Sculpture Garden or a 76-foot wide mural painted on cover coated steel, decorating Minnesota for any visitors to see.

“I did public art because people couldn’t afford my paintings, and I thought, ‘How is there a way that I can do my art, and millions can see it for free, but one person pays for it?’” Aiken said. “It was mainly because I believe in people, and I want people to see things, and I don’t think that one certain class of people should have everything, and then other people get the crumbs of that. Even though we leave the crumbs for other people, they create new fashion, new music, new design, new stuff.”

Aiken’s current studio is decorated with various finished and unfinished pieces of artwork of different colors and sizes, as he continues his journey through art. He reminds aspiring artists of the possibilities in new art and curiosity.

“Don’t just wait for what’s happening in there, but go to the museums and look at the painting and ask how it was done,” Aiken said. “How’d it get up there, literally have the conversation with the piece, then go and study that.”