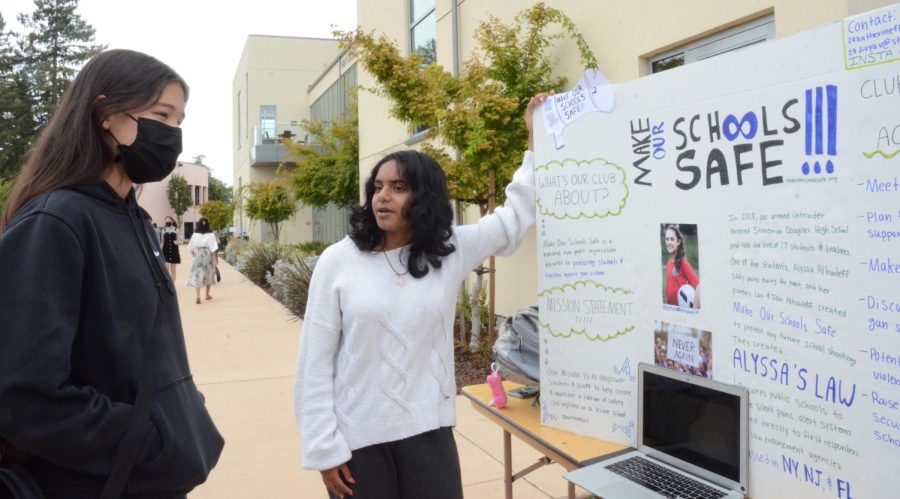 Divya Venkat (11) explains the goals of Make Our Schools Safe, a nonprofit organization devoted to combating gun violence. “The personalities of the people running the stands [were what drew me in],” Ryder Hewitt (9) said. “I got the vibe of the whole club. When I saw very invested, excited people, it made me more invested in their clubs."

by Shiv Deokar and Ella Yee

Students visited different booths set up by clubs and organizations at this year’s Club Fair, which took place in front of the Rothschild Performing Arts Center (RPAC) during lunch on Thursday.

The event featured over 70 clubs, allowing students to learn about various student-run organizations at the upper school. Club officers stood next to poster boards and described their plans for the year while students circulated around the booths. Many officers expressed a desire to reach a larger part of the community through their clubs.

“The main goal [of Art Club] is to get art out into the Harker community,” Art Club officer Laurel Davies (11) said. “We [as a community] are really interested in STEM, so we’re trying to get people who don’t think that they have artistic ability to get out, try it, enjoy it.”

Club Fair also offered an opportunity for new clubs to showcase their initiatives to the student body for the first time. One of these new clubs was Cooking Club, founded by Ian Gerstner (10).

“The point of Cooking Club is to promote a stress free environment and to allow students who don’t know how to cook, or those who already have some experience, to either further their skills or learn a little bit,” Ian said. “We’re going to be offering three lessons for basic [techniques], like knife skills, pan skills and prep skills.”

The frosh class experienced both new and returning clubs for the first time at Club Fair. While many clubs used interactive activities and prizes to entice new members, Ryder Hewitt (9) noted how the officers by the booths determined his interest in the clubs.

“The personalities of the people running the stands [were what drew me in],” Ryder said. “I got the vibe of the whole club. When I saw very invested, excited people, it made me more invested in their clubs.”

Many teachers also visited to see the different opportunities and booths hosted by students this year.

“I had seen a few of the clubs through my experience in business and entrepreneurship, mostly DECA, Career Connect and TEDx,” upper school business, economics and physics teacher Patrick Kelly said. “I just wanted to see the breadth of what we offer the Harker community.”

Students who are interested in joining additional clubs can submit a form created by Director of Student Organizations Eric Kallbrier.