Humans of Harker: Scoring and scouting

Muthu Panchanatham grows into his own through soccer and scouts 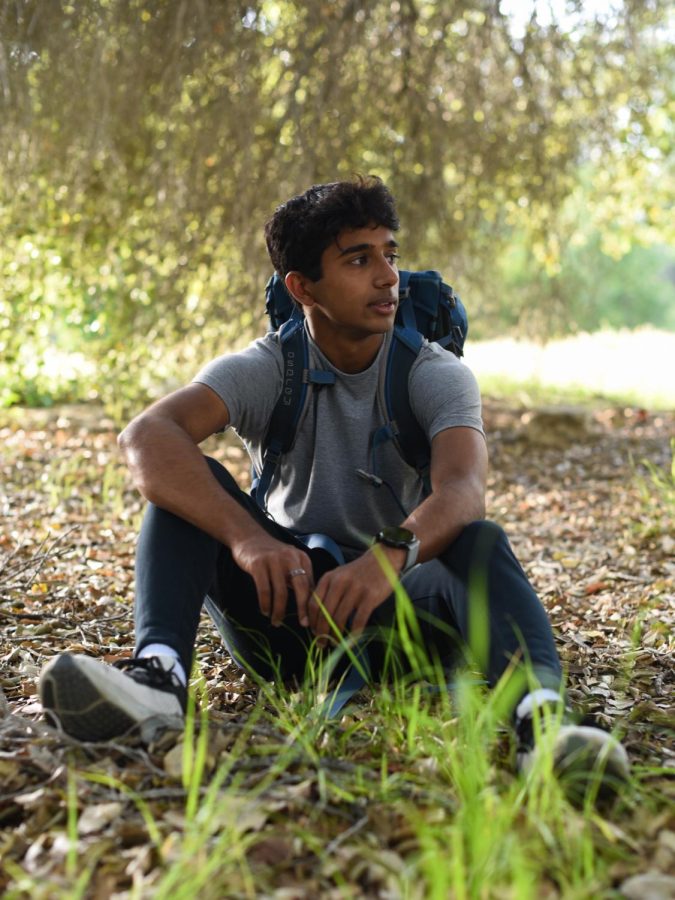 “I would worry about what other people thought about me, what my teammates were thinking. I got way too focused on that, so after a while, soccer wasn’t fun for me anymore. [But,] the school team is an environment where you can experiment and be creative with the ball, if you’re willing to take those chances, and I was able to do that," Muthu Panchanatham ('22) said.

A flash of green darts through the midfield, almost camouflaging with the light green turf on Davis Field. With quick, calculated strides, Muthu Panchanatham (‘22) weaves his way through a swarm of enclosing defenders. Dribbling the ball masterfully across the length of the field into the goalkeeper’s box, Muthu creates an opportunity for his team to score, eliciting “oohs” and “aahs” from the crowd.

Muthu began playing competitive soccer at the age of 7 and eventually transitioned to playing school soccer in high school. A striker for most of his playing career, Muthu carried over the attacking mindset he developed from his former position when he took on the role of centerback for the varsity soccer team out of necessity. These once-a-game, so-called “attacking runs” epitomize Muthu’s versatility and aggressiveness as a soccer player.

“My strengths as a defender are mainly my speed,” Muthu said. “I’m not the biggest person, so I often have to use my speed to compensate for that. I always try to predict what’s going to happen and that definitely gives me a step ahead of defenders. I try to out-think them in a sense, look at their body position and eyes and predict where the ball is going to and make a move before they make their pass. Sometimes, I am wrong, but I can usually use my speed to get back and make up for those mistakes.”

“I would worry about what other people thought about me, what my teammates were thinking,” Muthu said. “I got way too focused on that, so after a while, soccer wasn’t fun for me anymore, which was a big reason why I moved away from competitive and joined school soccer.”

Playing school soccer alongside his closest friends rekindled Muthu’s love for the sport.

“The school team is an environment where you can experiment and be creative with the ball, if you’re willing to take those chances, and I was able to do that,” Muthu said. “I formed close relationships with a lot of teammates, most of whom were already in my friend group, so I felt really comfortable playing with them.”

“Muthu is one of the most dedicated and hardworking people I know, and it helps him both on and off the soccer field,” Ishaan said. “Whether we are up one goal, down one goal, up five goals or down five goals, Muthu always gives it his 110% until the final whistle. As a teammate, he leads by example and pushes others to give that same effort which has helped us more times than I can count.”

Much like with soccer, Muthu experienced some challenges in his early days as a boy scout, but with time, developed into a vocal leader for his troop and role model for younger scouts. He fondly remembers his first camp-out, during which he accidentally collapsed his tent with all his belongings inside, needing to spend another half hour retrieving the items.

Muthu also participated in several Boy Scout high adventure camps, which feature rigorous outdoor activities, such as backpacking and canoeing. His first high adventure camp was Northern Tier, located in Minnesota, which featured over 80 miles of canoeing into Canada and back. The scouts would trek the land between lakes while carrying their backpacks and canoes. Muthu recalls a particularly frightening experience during this phase of the expedition.

“It was the day after a storm, and one of the patches of land we had to hike across was really muddy,” Muthu said. “I was hiking through the mud, and I got stuck and started sinking until I was waist deep. That was probably the most terrifying experience I’ve ever had. I had to be helped out by my crew mates and had to go the rest of the way without my backpack on, which was really frustrating for me.”

Frustrated over “not being able to carry his own weight,” Muthu began working out regularly. He found his next two adventure camps — the Florida Sea Base and Philmont Ranch in New Mexico — much less challenging. Over time, he developed into an enthusiastic leader for his troop, encouraging and supporting his fellow scouts as they had done for him in the past.

“We had to hike this place called Mount Baldy, which was half a mile of pretty steep uphill,” Muthu said. “The stones underneath were slate, so every two steps you went up, you went one step back. I saw a lot of my crewmates struggling to get up, so we started helping them up and shouting encouragement for them.”

While partaking in his own athletic and outdoor adventures, Muthu tells the stories of others engaging in similar activities through sports journalism and sports photography.

“In my freshman year, I took a photo of Devin Keller [‘19] cutting back with the ball in his hands,” Muthu said. “I didn’t have framing in mind, but [director of journalism Ellen] Austin was impressed with the photo. I realized I had a knack for sports photography, so in my sophomore year, I started taking pictures of every sport.”

Muthu believes the in-depth understanding of sports he acquired by being a professional sports fan gives him a leg-up when trying to capture the most pivotal moments in a game. Serving as sports editor in his junior year, Muthu took great pleasure in telling the stories of Harker’s student-athletes.

“During the pandemic, there were no real school sports, so my co-Sports Editor Vishnu Kannan (‘22) and I focused our coverage a lot more on our student-athletes and what they were doing to overcome the challenges of the pandemic,” Muthu said. “We highlighted the accomplishments of our sports teams in recent years and also looked forward to what we could achieve in the future.”

As opinions editor this year, Muthu has learned how to mediate discussions and integrate various, sometimes conflicting, perspectives when discussing issues relevant to the Harker community.

“Writing Harker Journalism’s editorials, which are the program’s official stance on issues facing our community, has been a huge eye-opener for me,” Muthu said. “I have learned how to integrate multiple perspectives across the program and use those ideas to form nuanced arguments.”

Through these pieces, Muthu has learned how to effectively empathize with the community and fulfill the journalism program’s purpose of “comforting the afflicted.” Friend Sasvath Ramachandran (‘22) highlights Muthu’s ability to connect with others in this way as one of his greatest strengths.

“One of the best things about Muthu is that he doesn’t take himself too seriously and that makes him very empathetic, since he doesn’t mind relating his own problems to other people’s and using his own experiences to make people feel better about their experiences,” Sasvath said. “He’s fairly vulnerable in that way, and people feel like themselves around him since he reciprocates their openness.”