Paul Woodruff reflects on his journey as a composer at Harker 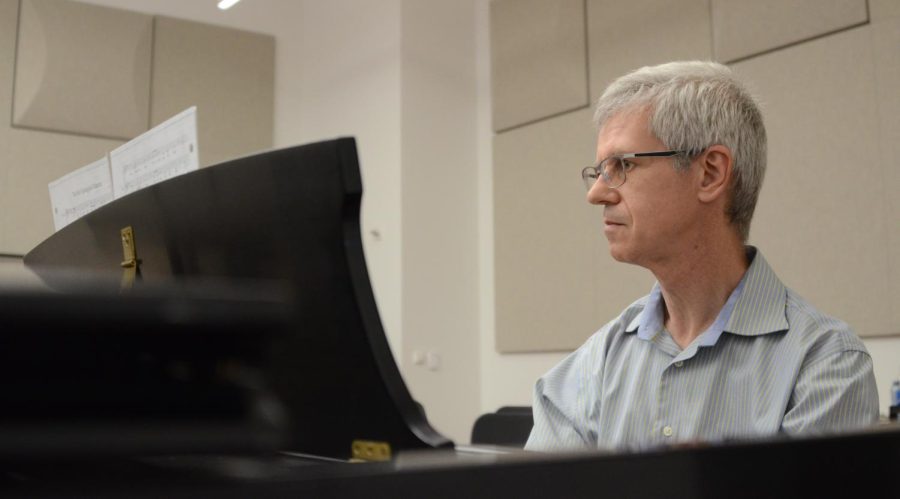 Upper school composer Paul Woodruff sits at the piano, playing notes of a song. Woodruff joined Harker 12 years ago, and has since been composing for music for upper school musical groups.

Euphonic voices fill the air with joyful tunes as upper school composer Paul Woodruff sits at the piano, observing the students implementing his modified arrangement of the classic, “Walking on Sunshine.” He watches the singers embody the energy and cheerfulness of the melody, giving life to the music he composed.

Woodruff started to write his own musical tunes at the age of eight with encouragement from his violin teacher at the time. Yet, his college education was primarily based on math, and that’s what his career path followed until he was hired to compose music at Harker 12 years ago. Even so, his scientific mindset still influences the way he sees music, instilling in him an appreciation for the raw beauty of music.

“I see patterns in music, and I can see music in patterns,” Woodruff said. “[There’s] a synergy there. I love the mathematical complexity [of] putting stuff together. Scientists that have studied this say that there’s a big connection in the brain between math and music. Those were the two things that I enjoyed most when I was a student, and I still see them as being very, very much connected.”

Through Harker music teacher at the time Toni Woodruff’s recommendation, Woodruff came to Harker as a pianist for the lower school choir. His first arrangement as a Harker composer, “Gummy Bears,” featured both the lower school’s choir and orchestra. Now, Woodruff works primarily at the upper school as a music coach, and he collaborates with Jazz Band, Orchestra and choirs.

Woodruff makes a point to take into account the style of a specific ensemble while composing and arranging for them. With choirs, he needs to understand the group’s as well as each individual’s strengths and the overall flow of the song. In order to do this, he must be aware of each singer and guide them through the piece. Downbeat member Alan Jiang (11) was quite impressed with Woodruff’s arrangement of “Walking on Sunshine,” which Downbeat performed in multiple shows.

“We got the piece at the start of the year, and it was a very basic, straightforward arrangement,” Alan said. “Halfway through the year, he worked on it with [upper school music teacher Jennifer] Sandusky, and he came back with a modified, more engaging version that we ended up performing at ICHSA [a competition for high school a cappella groups] and at all our concerts.”

When arranging pieces, Woodruff looks to the original composition for inspiration to adapt the piece to a certain group’s performance. Ideas for his music often come to him at random times throughout the day, and he finds further motivation through analyzing the works of classical musicians.

“I sometimes get ideas — they can come at any time — for little patterns,” Woodruff said. “They come when I’m asleep. If I’m thinking about something, if I’m in the middle of the composition or an arrangement, I can sleep on it, and I can hear something, feel something different in the morning. Or I wake up at night, and I have been known to go and get some manuscript paper and write down what’s in my head.”

Based on the patterns Woodruff makes, he determines the arrangement of music he wants. He believes that there is a proper way to begin arranging a piece, which helps him in his composition efforts. His beliefs shape his works from a string of notes into an everlasting, beautiful harmony.

“I was studying what kinds of things you can approach an arrangement with,” Woodruff said. “One of the things is that there has to be some theme, and I refer to these as motifs, which is a little three note thing. You can use that and change it to make some blend, some sequence.”

Woodruff reflects that one main obstacle he faces while creating compositions and arrangements proves to be deadlines. While he will generally start working on a piece ahead of time if there is a strict deadline, composing without a set deadline often leads him to edit the piece continually.

“[Woodruff] truly loves being a part of an educational environment,” Dr. Hart said. “This is someone that has an extremely high work ethic. His principles are rock solid, and because he believes so much in these programs, and the students here, he has a connection, and he wants to provide an impact.”

Throughout each barrier Woodruff faced, he learned from the people surrounding him, such as lower school instrumental music teacher Louis Hoffman. Studying others’ approach to music inspires him as a composer and arranger and gives him a way to grow.

“I’ve learned by listening to people,” Woodruff said. “Mr. Hoffman, for example, is quite a keen composer, quite a good composer. He sees shapes. Triangles in something, circles in something, and squares: ‘This is a square, it has a particular sound.’ I love to listen to people talk about what inspires them.”

Through various techniques Woodruff has figured out, along with his experience, he continues to work hard on his diverse compositions. His unique “motifs” allow him to fully reach the potential of his music, creating a melodious and wonderful tune for everyone to enjoy.

“What different composers have done to explore different viable harmonizations, I find really exciting to investigate,” Woodruff said. “I don’t necessarily use it directly from [what] inspires me, but I use some of those techniques in particular situations that I hadn’t thought of using before.”

Woodruff enjoys hearing the choirs and music groups performing his works. His goal in composing is to tailor each piece to accentuate the skills of each group and to learn in the process of doing so, bringing out the best in both him and his students. Sandusky, who directs both Downbeat and Bel Canto, recognizes the differences in voicing that Woodruff pays heed to when arranging for various choirs.

“For arranging, Mr. Woodruff has a really good understanding of the vocal ranges that are achievable in each choir and ensemble based on their ages and the genre or style of the piece,” Sandusky said. “Some of the coolest projects he has done were joint choir and instrumental pieces, especially for the lower school groups. He can do it all.”

From the lower school choirs and orchestra to the upper school, Woodruff has provided Harker with an array of music to work with for various occasions. His musical knowledge has aided many ensembles, and his meticulous work does not go unnoticed.

“I mostly arrange things because someone’s asked me to more often than because I just want to do it,” Woodruff said. “I take pride not in me having [composed a piece but in seeing the students [perform it]. For example, in Downbeat’s [rendition of “Walking on Sunshine”], Ms. Sandusky asked me to make it more interesting. I was looking for body language [in the students] to see whether I had achieved what I’d set out to achieve, and that’s what gives me satisfaction. That was my purpose, and I had achieved that purpose.”