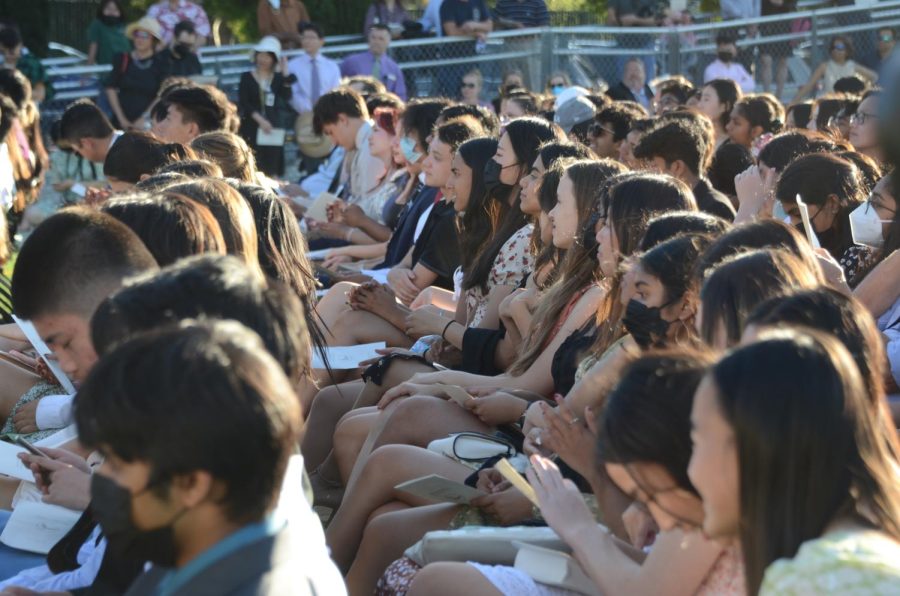 Students from the classes of 2022 and 2023 listen as Cantilena performs an arrangement of "You're My Best Friend" by John Deacon during baccalaureate on Davis Field. “[Performing at baccalaureate] is definitely a very bittersweet occasion,” Cantilena leader Teresa Cai (‘22) said. “I’ll definitely miss being at high school and the people I'm with, but I'm excited to go off and make the people here proud.”

by Desiree Luo and Olivia Xu

As the sun began to set on Davis Field, the classes of 2022 and 2023 filed onto the field in advisory clusters, dressed in formal attire. As their peppered conversations faded away, an arrangement of “Café Music” by Paul Schoenfield drifted from the makeshift stage with Yejin Song (‘22) on the piano, Cassie May (11) on the violin and Lucas Chen (‘22) on the cello. Next to the musicians stood Spencer Cha (‘22), upper school orchestra teacher Paul Woodruff and upper school instrumental music director Dave Hart, respectively, who turned pages of sheet music. Gradually, the music came to a close, signifying the start of the baccalaureate ceremony, a symbol of leadership transferral within the school.

Students and advisors of the senior and junior classes and seniors’ families assembled on Davis Field for the annual baccalaureate ceremony on May 18 at 6 p.m.

Prior to the ceremony each year, the graduating seniors collectively select one faculty member and one senior to speak at the ceremony. This year, the class of 2022 chose class dean Christopher Hurshman and Associated Student Body (ASB) Vice President Ayan Nath (‘22) as speakers.

After the instrumental music performance, Assistant Head of School Jennifer Gargano initiated the ceremony by explaining the religious origins of baccalaureate and how the speeches at modern baccalaureate ceremonies serve as sermons and farewells. In addition to acknowledging the current junior class’ transition into leaders, Gargano emphasized that the ceremony’s purpose was not to recognize each senior individually but rather to honor the entire senior class.

“Every member of the Class of 2022 made a special impact on the Harker School,” Gargano said. “As you move on from Harker to pursue your goals, it is true that new student leaders will emerge, future scholars will serve us and we will continue to have students who enrich this community in new and interesting ways. Nevertheless, no class, no students will make the same impact you have. You are the class of 2022.”

Cantilena then took to the stage to perform “You’re My Best Friend” written by John Deacon, a song that expresses gratitude for a consistent companion.

“[Performing at baccalaureate] is definitely a very bittersweet occasion,” Cantilena student-elected leader Teresa Cai (‘22) said. “I’ll definitely miss being at high school and the people I’m with, but I’m excited to go off and make the people here proud.”

“Wherever we may go, we entrust the community values we have learned here to the students who will follow us — the values of respect, accountability and honesty that are so integral to the Harker community and that we as a class have helped cultivate over the last four years and will remain with us for our entire lives,” Alexa said. “We ask that these principles be protected and embraced by Harker students in the years to come.”

Hurshman related his own experience with giving a graduation speech in high school and highlighted the immense change that follows the class of 2022’s graduation and the importance of accepting and embracing it.

“When you transition from one stage of life to another, you can take the chance to confront all the things you did and didn’t do, the person you wanted to be and the person you actually were,” Hurshman said. “If you’re willing to sit with your feelings of grief and loss for a while, you will have the chance to determine whether your choices align with your most deeply held values.”

Sharing stories of his regrets, Hurshman further stressed that the choices one makes every day shapes one’s character, and learning from and reflecting on missed opportunities allows for consideration on the type of person one strives to be.

“There are so many more ordinary moments in your life than extraordinary ones that are guaranteed to have the greater gravitational pull on your character,” Hurshman said. “I want to exhort you to care about the ordinary.”

Soon after the audience applauded for Hurshman’s speech, Keller returned to the stage and cued a cover of “Uptown Funk” by Bruno Mars that blasted from nearby speakers. Keller revealed to the crowd that they had listened to a snippet of Ayan’s performance at the 2019 Hoscars, after which “we all knew that he was someone that was going to make an impact on our lives in the upper school,” according to Keller.

The opening lines of Ayan’s speech, filled with jokes about previous baccalaureate speakers and procrastination, were met with laughter and cheers from his classmates.

“I’m absolutely honored and thrilled to be in front of you here today,” Ayan said. “Ever since I went on tangents at the school meetings about forks or traffic at the Saratoga intersection, I never thought that I would be allowed to speak to you all with a mic ever again.”

Yet, Ayan also persuaded both classes to carry their passions into their futures. He acknowledged the evanescence of high school as well as the thrill of moving forward by citing a quote from speaker Michael Altshuler: “The bad news is time flies. The good news is you’re the pilot.”

“As Michael Altshuler said, we are the pilots of our lives,” Ayan said. “Yes, we might not know where exactly we are flying to, in a figurative sense, but all we can do is look forward to the future that we create for ourselves. I hope that we will continue to bring our youth with us wherever we go and never lose touch with who we are. ”

To conclude the ceremony, Head of School Brian Yager acknowledged the performers and speakers before reminding the audience of the graduation ceremony on May 19 at 5 p.m. at the Mountain Winery in Saratoga. He once again emphasized the rising seniors’ new responsibility and thanked both classes for attending the ceremony.

“This baccalaureate ceremony serves as the transition point for the student leadership at the school,” Yager said. “[To the] members of the class of 2023, the school is now yours to lead. Please do so with the same energy, spirit and collective effort that this remarkable class of 2022 has modeled for you.”

After the ceremony, students gathered with their friends and families to take final pictures together on the field, while Harker lifers, students who attended Harker for 13 years from kindergarten to 12th grade, met for photos and dinner in the quad.

“It’s all bittersweet,” Keller, who will be retiring at the end of the school year, said in an interview with Aquila after the ceremony. “It really is. But if I could have scripted my last baccalaureate, it would have been tonight. It was perfect.”