Class of 2022 graduates at Mountain Winery 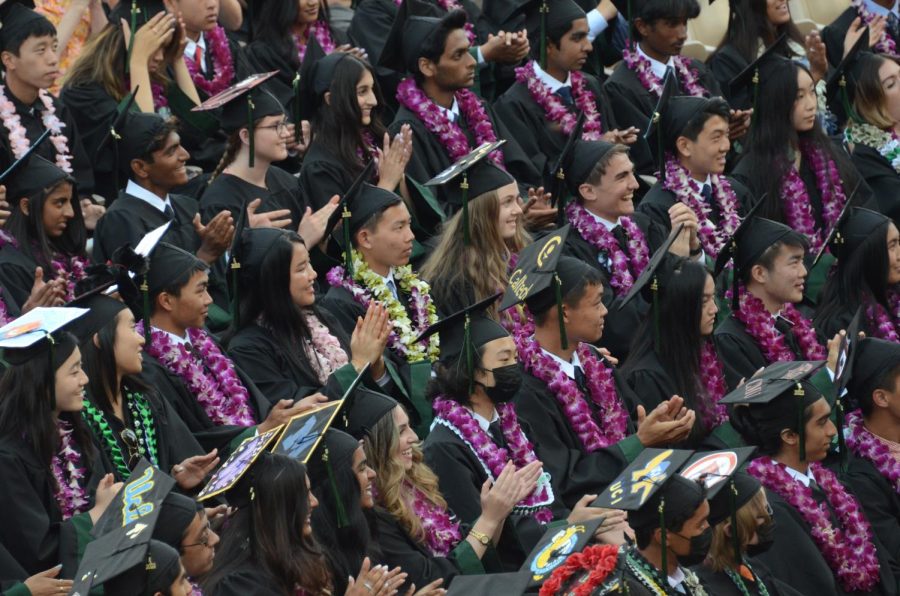 Members of the Class of 2022 clap during their graduation ceremony. The ceremony took place at the Mountain Winery in Saratoga on May 19 at 5 p.m.

The class of 2022 concluded their high school careers at their graduation ceremony at the Mountain Winery in Saratoga on May 19 at 5 p.m.

“It’s good to tell the seniors good luck –– singing and performing in general is a major part of saying goodbye and sending someone off to their future,” Bel Canto member Bhavya Srinivasan (9) said. “There’s a lot you can communicate through music with emotion.”

Rohan Thakur (‘22) delivered his valedictorian address after Keller’s welcome, commending the class of 2022 for their endurance throughout the last four years, especially through the COVID-19 pandemic. He highlighted the importance of carrying this resilience into the future.

Harker alumnus, Board of Trustees member and DoorDash Co-Founder Andy Fang (‘10) then gave a keynote speech. Fang presented three life lessons he learned through his years of successes and struggles at Harker and with DoorDash: to remember that growth and its potential overcome initial knowledge or talent, to find a balance between one’s talent and passion in one’s career and to believe in oneself. Next, the graduation chorus performed a rendition of “Omnia Sol,” which they started practicing in March, according to Bhavya.

After the graduation chorus returned to the stage for their final performance of “The Harker School Song,” Head of School Brian Yager delivered a farewell speech to the graduating class. Alluding to the survival of the crew of the ship Endurance despite its sinking and Percy Bysshe Shelley’s poem “Ozymandias,” Yager emphasized the endurance the class of 2022 displayed throughout the last few years.

“I’m really grateful for [the seniors], grateful for their leadership, and the seniors did take some responsibility to be more proactive in mentoring younger students and guiding them and communicating expectations,” said class of 2022 dean and upper school English teacher Christopher Hurshman. “It’ll be hard to see them leave, and I’m not quite ready to let go yet. I’m really proud of them, and I’ll miss them.”

In a procession after Yager’s speech, one by one, as Hurshman read aloud their names, the graduates filed onto the stage, received their diplomas and posed for photos with Yager and Keller.

“When I walked across the stage, and it’s just me on stage, and my name is read, it’s one of the few moments where I’m honored in that way,” Harshil Garg (‘22) said. “Everyone, regardless of people, people who [I] might not even know, would cheer for me for a milestone that everyone looks up to.”

As the graduates returned to their seats, they each turned their cap’s tassel from right to left to signify the transition from high school to college. The graduates then tossed up their caps in celebration, and the ceremony closed with final remarks and closing statements from Yager and Assistant Head of School Jennifer Gargano, who then released doves into the air.

“Attending graduation and hearing all the names read, taking photos with everyone, it was a great moment because everyone was congratulating everyone; people’s parents who I have never met were saying congratulations to me, giving me hugs, shaking my hand,” Harshil said. “It was a festive day for everyone. Everyone shared that celebratory spirit, regardless of your existing friendship circles.”