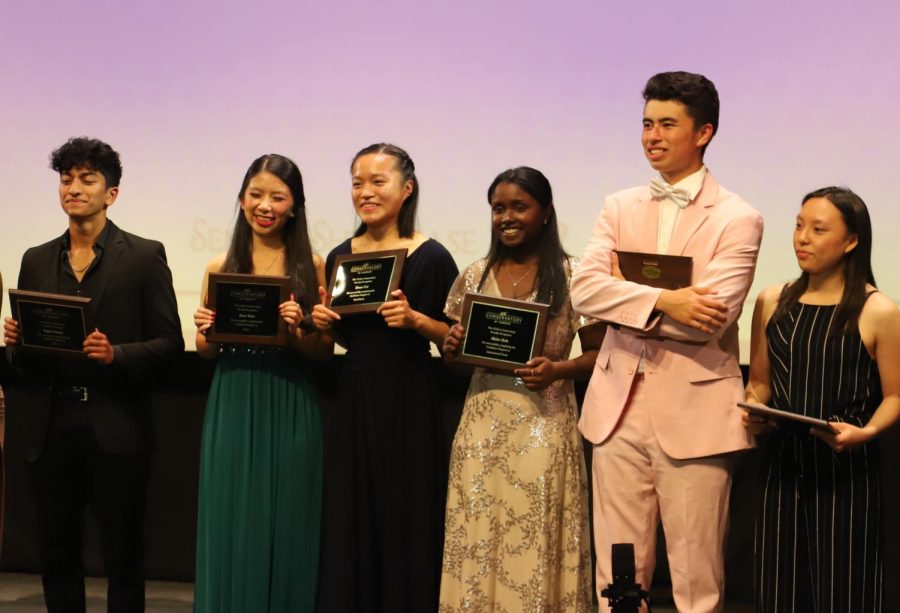 Dancers, actors, instrumentalists, vocalists, tech crew, students from all aspects of the performing arts line up on stage, their smiles bright and wide as the stage lights shine down on them. They hold up their plaques after taking the floor for their last performance as students on the Harker stage.

These Hammies-winning students then received a print certificate and pig toy on stage, and had to either squeeze and squeak the pig or act out a pig. The teachers introduced each student with praise or a small story as audience members applauded the winners, which included students of each grade level. Finally, they handed out Certificate award plaques to outstanding students in the Certificate Program, a 4-year legacy program for performing arts students. A buffet-style dinner was served afterwards outside the Rothschild Performing Arts Center (RPAC).

The Senior Showcase opened up with a dance performance led by Nikki, a contemporary lyrical piece to “Too Good at Goodbyes.” She started choreographing in December and met with the other dancers –– Syna Gogte (12), Eileen Ma (11), Anja Ree (11) and Sonia Yu (9) –– starting in December.

“This is definitely my most terrifying performance because I did it all myself, choosing the costumes and choreographing the dance,” Nikki said. “It’s a lot more scary than a teacher doing it for you since you know they have been successful in the past and they’ve been doing this forever.”

Though Nikki normally dances to more upbeat songs, she chose a sadder song for the showcase to demonstrate how she feels about leaving, a message reflected in the song’s lyrics.

Next followed Ysabel, in the theater program, with a performance of a short scene titled “Asian Goggles”; then, Malar, in the instrumental music program, on the violin to “For Someone I Love,” accompanied by fellow students Michael Tran (12), Jia Parikh (11) and Varun Fuloria (10); followed by Joshua, in the musical theater program, performing a scene with juniors Sawyer Lai, Lucy Feng  and Shayla He (10) of “Dentist!” from “Little Shop of Horrors.”

Sujith then took the stage with a dance routine to “Go Crazy” with BB Ajlouny (11) and Kuga Pence (10); after, Melody performed a vocal piece of a composition by J.S. Bach with Cassie May (11), Lucas and Spencer on instrumentals, followed by theater student Ishaan’s scene of “Launcelot’s Monologue” from William Shakespeare’s “The Merchant of Venice.”

Audience members then saw musical theater student Daniel Wu’s (12) rendition of a scene titled “We Look to You” from the musical “The Prom,” a scene featuring a performer explaining why he loves theater. Daniel chose the scene because it echoed a personal theme to him of theater acting as an escape without the limitations of the real world.

“[Each performance] is a very personal thing,” Daniel said. “It’s almost more for the performers than it is for the audience. As a final song to my high school theater, musical theater, the whole experience, it’s a good way to wrap it up by singing about the theater.”

Draper announced this year’s “Life in the Arts” award, awarded each year to an alumni member pursuing the arts after graduating from the upper school. Draper introduced Steve M. Boyle (‘06), who is still involved in theater arts as a career.

Next, Saumi, following the theater track, performed “Queen Margaret” from Shakespeare’s “Richard III.” She left the stage to Simren, accompanied by Nina Franz (11), Jia Parikh (11) and Varun Fuloria (10), who played a jazz piece of “Get Happy,” followed by Teresa’s vocal rendition of “Every Bush New Springing.” A group of dancers, Irene, Eileen Ma (11), Yejin Song (12) and Arely Sun (12), walked on stage, performing dance student Irene’s choreography of “First Burn” from “Hamilton,” before Richie’s theatrical performance of “Maria” from “West Side Story.”

Allen then acted out a scene titled “I Hate Hamlet,” a piece also about the theater, which he found fun for his last performance. Allen rehearsed at home and also worked with Draper, before the show.

“It’s gonna be everyone’s last show for every discipline, it’s gonna be the last thing that we do, so it’s nice that everyone reaches the end of their journey at the same time,” Allen said. “It gives us all an equal finish line and one last thing that we get to work on, and we all have our own individual projects, but we all reach that conclusion together.”

The show closed off with vocal student Anya’s rendition of “If I Ain’t Got You,” accompanied by Spencer, Shrey Khater (12) and Anthony Tong (11) on instrumentals; and finally Kai’s choreography of “The Robot” with fellow students Brandon Park (12), Aspen Shen (11), Luke Mehta (10) and Kai Stinson (10).

The seniors returned to the stage to receive custom plaques from each of their mentors and posed for photos before receiving hugs and flowers from family and friends outside the theater.

Lang-Ree also echoed Nace’s sentiments about the graduating performing arts seniors and wished them luck as they head into their next ventures.

“It’s time to go have new adventures and learn even more wonderful things, but you miss them like crazy,” Lang-Ree said. “Their tenacity, ambition, and passion for their art is so profound because they stuck to it and grew as artists in the most remarkable ways that we haven’t seen before.”