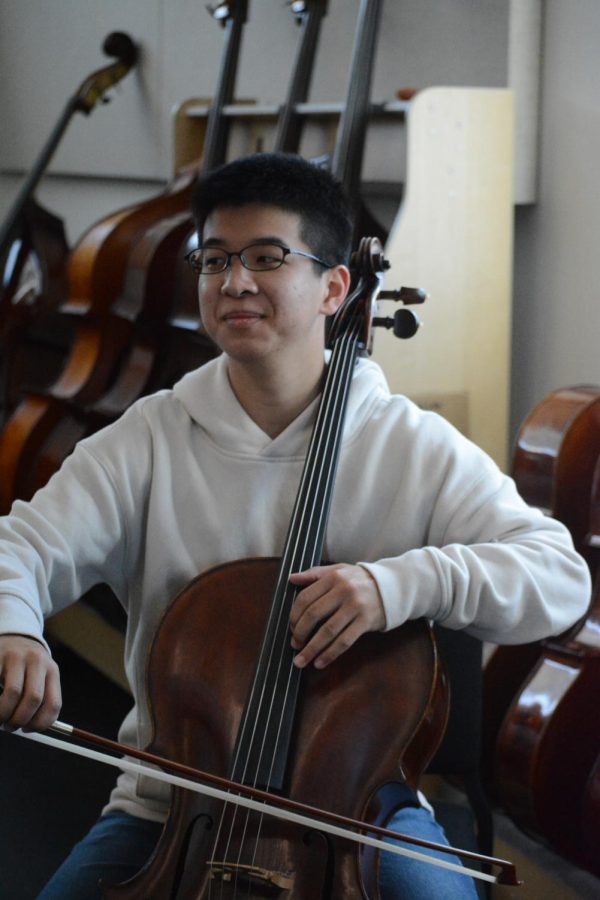 by Gemma Chan and Erica Cai

Clasping the bow of his cello, Lucas Chen (12) recalls bowing the instrument’s strings gently and beginning to perform his worries away, note after note. Every note is a worry gone, a stress gone, a weight lifted from his shoulders. Every worry gone is confidence, faith and a powerful amount of love for cello gained.

For the past 11 years, cello has factored into many aspects of Lucas’s life, both at Harker and in extracurriculars. As the co-president of Harker’s Tri-M Honor Society and an avid member of the Palo Alto Chamber Orchestra as well as Young Chamber Musicians, Lucas devotes endless hours to music everyday.

“[The cello] is a very expressive instrument,” Lucas said. “For example, [on] a piano, you just hit a key, [whereas] there are so many different ways that you can customize the way you play [on a cello]. You can change the sound, [or] you can change where you’re hitting the note.”

Lucas originally started off as a pianist in first grade but later focused on cello and, more recently, realized that the latter instrument had become his one escape from reality.

Lucas took the musical experience he gained from playing piano to grow as a cello player. As a child, he set both short and long term instrumental goals. Though he found cello’s initial learning curve rather steep, he continued to play, focusing on reaching a more advanced level of musicianship, which created a rough patch for him toward the start of his cellist career.

“Cello is one of those instruments where it’s extremely hard to start, but once you get your footing, it’s much easier because you have to build the technique to play the instrument,” Lucas said. “A lot of that is slow, very meticulous practice that is difficult to handle at a young age, so it was mostly grappling with how do I maintain interest in this instrument, while all I do is do a bunch of pretty boring exercises.”

Lucas maintains a positive outlook on continual self-improvement in cello. His dedication to cello shines through both on and off the stage, whether it’s during rehearsals in the comfort of his own home, or on the stage in front of hundreds and hundreds of people.

This drive toward continuous self-improvement permeates Lucas’s impact on the music community, as well. Instrumental music teacher and orchestra director Dr. David Hart, who has worked with Lucas since his freshman year, notes his strong work ethic.

“There was a very strong cello section when [Lucas] was a freshman, some very strong upperclassmen and they had very strong personalities,” Dr. Hart said. “He came in and he was in awe, it seemed, but you could tell he was taking it seriously and soaking it up. I also noticed that he did a lot of work, he practiced, he came prepared and looked up to the upperclassmen.”

Lucas’s hard work and dedication eventually paid off as he was finally able to overcome his childhood stage fright and pursue what he loved without the anxiety of performing getting in his way, with additional help from his musical community.

“It was great to see the amount of support within the musical community and I think that’s been something that motivates me,” Lucas said as he reflected on a nerve-wracking performance back in the summer of 2019. “One of the things I’ve been [working] on is how to perform without letting all of that stage fright get to me.”

Yet, just as Lucas draws strength from his fellow musicians, he also has grown to provide the same encouragement toward them as well. Dr. Hart recalls a now legendary anecdote that occurred during the upper school orchestra’s tour in Hawaii, in which Lucas promised the entire violin section that he would buy them all boba if they did not rush during their performance. The orchestra successfully completed the challenge, and Lucas gave them their reward as promised.

“This quiet, respectful human being who took charge of his own life has grown to take ownership for the whole group, in a kind way,” Dr. Hart said. “It’s easy to want to be overly critical, [but] that is the last thing that happens. It’s a supportive environment where mistakes are celebrated, and yet, we have high expectations and [Lucas] does for himself as well as others. He’s a pillar to me, he’s the rock of the group.”

Close friend Zeel Thakkar (12) met Lucas at a programming summer camp right before junior year. As the only juniors in the class, they formed a bond that remains “indestructible to this day,” according to Zeel. Lucas and Zeel have spent several hours-long facetimes listening to his playing over the years in high school the two have known each other.

“What really stood out to me was Lucas’s dedication to everything that he enjoys,” Zeel said. “I’m endlessly impressed by his work ethic and passion for cello, and how much dedication he puts into it.”

As Lucas looks back on not only his musical, but also academic journey, he reflects on how cello has helped him develop his identity.

“I have no clue where I would be [without cello] because I feel like I would be completely different,” Lucas said. “Frankly, I don’t know what I would be like, because so much of me has [been dedicated] towards playing the cello that I haven’t had those experiences yet.”