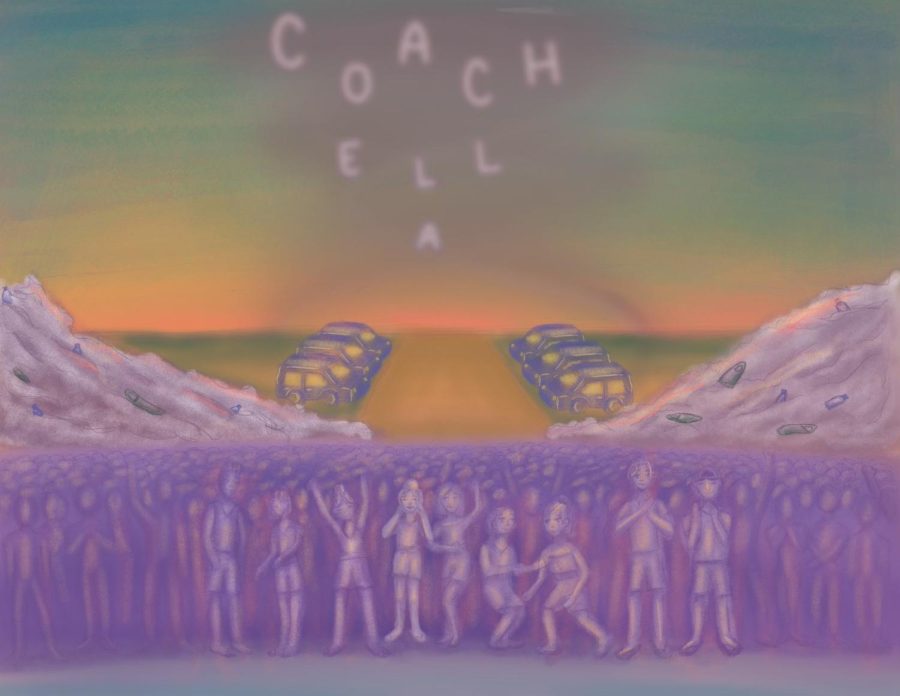 Caption: Coachella generates over 1612 tons of waste, only 20% of which is recycled, and produces noise pollution reaching over 110 decibels. The sound level compares to that of a car horn and the volume can interrupt predatory activities in the area.

Thousands of celebrities and influencers clad in carefully-selected outfits gather under the hot desert sun for the largest music festival of the year –– Coachella. For two weekends, attendees post on social media, live in the Southern California desert and attend concert after concert.

But during that time, they generate over 1612 tons of waste, only 20% of which is recycled, and produce noise pollution reaching over 110 decibels.

“Something that I think about is the waste we generate when we do things like this for our entertainment value,” said upper school chemistry teacher Andrew Irvine, who attended similar events in his childhood. “People get focused on whatever they’re doing in their music and they don’t really think twice about any sort of sustainability.

With over 750,000 people attending the 6-day event this year, much of the waste still stems from plastic water bottle usage since attendees remain in the desert for the duration of the event. In Dogan Gursoy’s book “Festival and Event Tourism Impacts,”  he explains how 70% to 80% of waste isn’t recycled since dumping it into landfills is much cheaper for event organizers.

“From what I can see, there’s a lot of plastic waste, especially because people are dehydrated and Coachella is in the desert,” Research Club Vice President Alex Lan (11) said. “There’s a huge need to hydrate a mass population of people without the built-in infrastructure to do so. And that’s why there’s a lot of waste that happens every day with food, drinks.”

Additionally, the event produces noise at a high volume, 110 decibels, the volume of a car horn. The nose causes disruptions for animals in the area, and the Centers for Disease Control and Prevention (CDC) discourages listening to volumes over 85 decibels. Additionally, predators experience up to a 70% reduction in the area in which they can locate their prey.

The one-time use outfits many attendees wear to Coachella also contribute to the waste produced by the event. Green Team member Summer Adler (9) mentions how outfits at Coachella compare to dressing up for Harker spirit events and how students could practice more sustainability.

“For Homecoming, there’s dress-up for class spirit,” Summer said. “Most people buy something for the event and then keep it in a box all year to use again, so I think just consider that. And when you’re a senior, you could give your stuff to the next class.”

Although Coachella has taken steps in the past to minimize their impact, such as eliminating the usage of plastic straws, other concerts have demonstrated better ways to stay sustainable. Recently, rock band Coldplay implemented kinetic dance floors and energy-storing bikes to produce energy for their latest world tour. The announcement came with their promise to cut emissions by 50%. There are also organizations that specifically focus on making music events more sustainable such as Reverb, which helps artists like Billie Eilish and Lorde promote sustainability.

“[The sad thing is,] at concerts, people aren’t like thinking ‘Oh, let me not use waste,’” Irvine said. “They’re very focused on getting to the right spot and being with their friends, and you usually see a lot of trash all over the place –– it’s very hedonistic.”

Although music festivals such as Coachella are mass-generators of waste due to the plastic waste and single-use outfits, Irvine hopes that as the information on the impact of climate change spreads, both attendees and Coachella organizers will step up to make change.