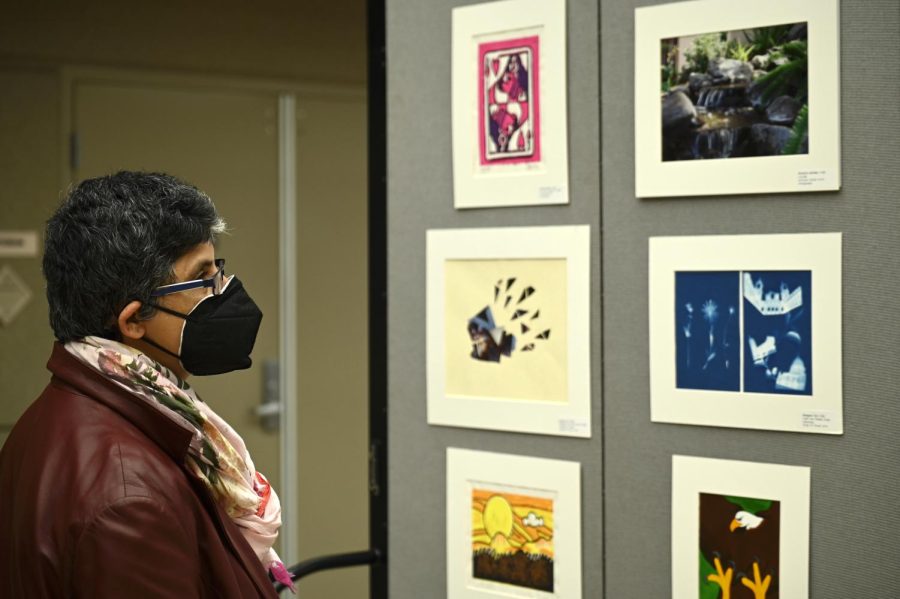 A gingerly cut wooden butterfly perches on a black stand. A few feet away, crawling vines wrap around the neck of a glossy pine green vase. These are just some of the creations on display at Artstravaganza, held throughout the entirety of last week in the Nichols Atrium.

Campus art and writing exhibition Artstravaganza displayed student artwork and literature from the past year, with exhibits featuring work from all visual arts classes as well as pieces recognized in the 2022 Scholastic Art & Writing Awards. The reception took place last Tuesday during lunch, kickstarting with live music performed by the upper school Jazz and Lab Band.

At the reception, Harker Eclectic Literary Magazine (HELM) released its newest print issue “Renaissance” at a booth in front of Nichols while Art Club distributed copies of the HEART Zine, both clubs offering free copies to students and faculty.

“The turnout this year was a lot more than previous years because this year, we made a last-minute decision to make the copies free,” HELM co-editor-in-chief Alina Yuan (12) said. “So I guess that’s why so many people came to our booth.”

After an announcement by Jazz Band regarding upper school music teacher Dr. David Hart’s upcoming departure, Dr. Hart punctuated the Jazz Band performances with a trumpet solo, one of the musical ensemble’s traditions for graduating students.

“We have this tradition in Jazz Band that if you’re a senior and you’re graduating, you have to solo over ‘Saints Go Marching In,’” Jazz Band member Masha Velikhovskaya (10) said. “I decided that it [was] time to return the favor because he’s technically graduating this year. We surprised him and he was like, ‘You guys didn’t tell me before!’”

“Everyone was super supportive and more people showed up than I expected, which was really nice,” Iris said. “I liked it because it was a performance aspect of what people would normally expect to be just writing.”