Flames of triumph and hues of spring: Upper school students and staff celebrate Holi with family and friends 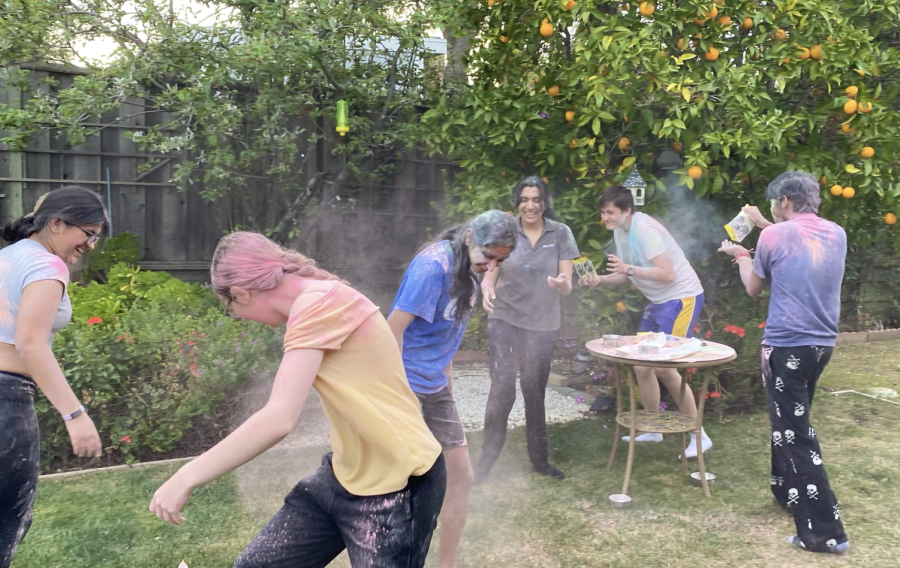 Seniors Keya Mann, Camilla Lindh, Simren Kochhar, Saanvi Arora, Tristan Goodwin and Ishaan Parate throw powdered color at each other to celebrate Holi on March 18. Holi, or the Festival of Spring or Colors, is a Hindu festival most commonly celebrated in India, although people also take part in festivities all over the world.

Upper school students and staff celebrated the Indian spring festival Holi on March 17 and 18 by taking part in the festival’s traditions with family and friends.

Holi, or the Festival of Spring or Colors, is a Hindu festival most commonly celebrated in India, although people also take part in festivities all over the world. Celebrations occur over two days in March: on “purnima,” the day of the full moon,and the day after.

“Holi, to me, is a fun event where you can meet with your friends and enjoy the vibrant colors and festivities,” Arjun Gurjar (10) said. “I remember when my friends went to a park where they were holding a Holi celebration, and we were given water guns and packets of colored powder. It was really fun.”

The festivities of Holi begin with a bonfire called “Holika Dahan,” meant to represent the triumph of good over evil and the burning of evil spirits. The ritual stems from the story of Vishnu and Hiranyakashipu, in which the sister of the evil king, Holika, attempted but failed to kill Vishnu’s devotee, Prahalad, by burning him in a fire. People often place a sculpture of Holika in the pyre while singing and dancing around the fire.

The morning after Holika Dahan, people take part in the most famous celebration of Holi, playing with colors. Celebrations include throwing water colors of different shades at each other using water guns and balloons, while many people of various backgrounds also throw powdered colors, hence the name “Festival of Colors.” Different colors represent a variety of meanings — green for fresh starts, blue to symbolize the skin color of Hindu deity Krishna, yellow as the natural remedy tumeric and red for love and fertility. In the afternoon, children and adults wash up and visit friends and relatives with snacks and sweets, such as yogurt and cracker snacks, called “Dahi Vada” or “Bhalla,” and “Gujia,” a fried sweet dumpling, to symbolize new beginnings.

Accounts of Holi date back to the 4th century CE during the reign of King Chandragupta II of the Gupta Empire, although historians believe that the holiday existed before the common era, previously serving as a rite for the happiness of married women. Modern-day beliefs in the festival revolve around a variety of stories, including the celebration of the love between Hindu deities Krishna and Radha and the victory of Hindu god Vishnu over an evil and arrogant king named Hiranyakashipu.

“Whenever Holi came, there wasn’t anything related to religion, [so even] if my neighbor is a Muslim they would also come out and play with us although it’s a Hindu celebration,” upper school administration and attendance coordinator Ritu Raj said. “That’s how we grew up, [and] there’s not any restriction that says only Hindus are playing it.”

Holi celebrations took place in Harker prior to the COVID-19 pandemic, via the distribution of handouts on the history of Holi in the preschool. Parents also brought snacks and colors for students to celebrate the holiday with in the lower school.

Celebrations also happened locally in the past through Holi with the Asha for education Stanford chapter, which held Holi celebrations in Wilbur Field, Stanford. After a break due to the pandemic, Asha Stanford will return to the festivities on April 23 and 24 from 10 a.m. to 6 p.m. on Wilbur Field. All proceeds from the event will fund education for children in India.

“We have been celebrating Holi for as long as I can remember,” Raj said. “Even with the pandemic, we are trying to recreate the same experience we had back in India.”