Back with a blast: the Hoscars return triumphantly to center stage 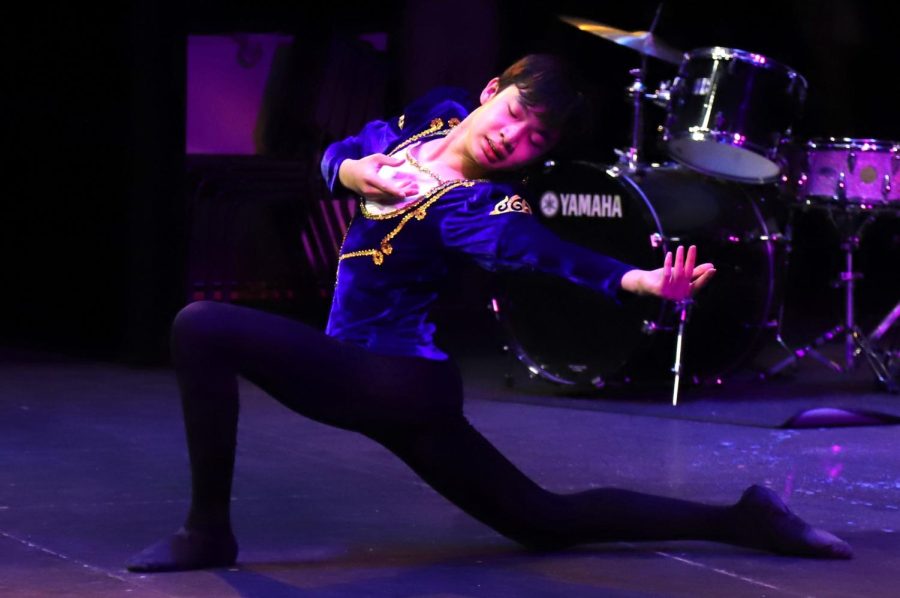 Anwen Hao (9) poses in a dance routine to Albrecht’s Variation from “Giselle" at this year's Hoscars. The show, themed "Oscars" this year, took place on March 30 in the Rothschild Performing Arts Center and featured acts in singing, dancing, instrumental and more,

“Before we start, let me assure you there will be no slaps and no punches thrown today. So sit back, relax and enjoy the show. Let the Hoscars begin!”

Associated Student Body (ASB) treasurer Aaditya Gulati (12) proclaims the show’s commencement to uproarious laughter and applause. The lights dim, and the audience waits with excitement for the curtain to open and reveal the first act.

75 students and one faculty member took the stage in 15 different performances for the Hoscars, the upper school’s annual talent show, in the Patil Theater during a special schedule on March 30. Upperclassmen attended the first performance at 11:10 a.m. followed by the underclassmen at 12:25 p.m. As of March 3, the administration lifted mask mandates for performing arts events, so Hoscars performers had the choice of whether or not to wear masks.

ASB and class councils organized and hosted this fourth iteration of the event, which first took place in 2018; the Hoscars did not occur last year during online school. Student council, led by the Student Events Committee, began organizing the Hoscars in early November after the second Quadchella. They worked in three teams: tech, judging and publicity.

Aspiring acts sent in audition videos anytime from Dec. 9 to Jan. 17, and the judging committee selected performers using the criteria of “skill, vibe and diversity,” according to junior council representative Jacob Huang (11). Originally planned to take place on Feb. 11, the omicron wave and subsequent tightening of COVID restrictions led student council to push the event to March 30 so the show could take place in-person in the theater. As head of the Student Events Committee, Jacob oversaw much of the organization for the Hoscars.

“Hoscars was honestly an incredibly, incredibly arduous and difficult process, and it took lots of effort to get everyone to work together and create one big fun show for everyone,” Jacob said. “Obviously, a big thank you to the entirety of student council, the administration for letting us do this, the performing arts department and many other people who helped with the show to make it what it was.”

Class council representative Eric Zhang (9), who was part of the tech crew, worked behind the scenes during the performance to ensure the show ran smoothly. Preparation included a full run-through the day before the Hoscars.

“On the day of [there was] a lot of organization [and] making sure everyone’s ready on time and all the acts are in order,” Eric said. “It’s cool to know that I was part of helping set up and making the show happen, [with] not necessarily even having to step out onto stage.

“It was great because I feel like [the Hoscars are] not that formal in the sense that you don’t have to dress up formally and there’s no formal groups that are performing,” Varun said. “It felt really low pressure because there were also two performances so even if you did badly in one of them you could still do better in the next one.”

“Mainly we wanted to make sure that it still rhymed and that the meaning overall still had some connection to the original lyrics, and I think we achieved both of those things,” Shayla said. “Overall the performance went well, and we’re all very proud of it.”

Next, Kashish Priyam (9), Saloni Shah (10) and upper school computer science teacher Anu Datar danced together in a Bollywood-inspired performance, and the enthusiastic audience clapped along with the beat. The idea of doing a Bollywood routine occurred early in the year, when Kashish and Saloni, both students in Datar’s classes, had discussed it with her. For about two months, the trio practiced together for 10 minutes at the end of lunches.

“I always like doing dances on Indian songs because I love watching Indian movies, and they’re all super dramatic and colorful, so I like the energy,” Kashish said. “And on top of that, it just seemed like it’d be fun. I thought it would be good energy for Hoscars.”

Following this routine, sophomores Miki Mitarai and Sonya Apsey sang “When I Was Your Man” by Bruno Mars while playing the ukulele and piano, respectively; Rei Binkley (9) danced in a routine titled “Ctrl Delete”; and Lucas Chen (12) and Cassie May (11) played the cello and violin in a classical rendition of “Toxic” by Britney Spears. As a senior, Lucas explains that the performance held special meaning for him.

Then, Anwen Hao (9) performed Albrecht’s Variation from the ballet “Giselle,” and Richie Amarillas (12) sang Michael Jackson’s “Billie Jean.” Juniors Makayla Aguilar-Zuniga, Sophia Bronder-Chang, Lucy Feng, Samvita Gautham, Jacob Huang, Anika Muddu, Jessica Tang and Jessica Zhou performed a dance routine to a medley of K-pop songs, including “Secret Story of the Swan” by IZ*ONE, “Loco” by ITZY and “God’s Menu” by Stray Kids. All group members worked together on positioning and editing the music as well as learning the moves, which they adapted from each artists’ original choreography.

“I have to admit it was really nerve-wracking,” said Jessica, who originally wanted to do a K-pop routine and reached out to her friends. “Personally, I’ve never done any [dance shows] before, so I was really sweaty before getting on stage, but on there it was just really fun letting the music go and letting the practice pay off.”

When the curtain opened again, the audience saw 29 Advanced Placement (AP) Art History students arranged in a tableau vivant inspired by “The Raft of the Medusa” by Théodore Géricault. Since the first Hoscars, AP Art History has staged a tableau for the show, now a beloved tradition among audiences. The students looked for paintings that could involve several people and used a template to arrange their formation.

“It’s so much fun,” upper school AP Art History teacher Donna Gilbert said. “It makes me so happy because I think art is fun, art history is fun, learning is fun, so this is just a great example of that.”

Tiana Salvi (9) took the stage next and danced a hip-hop style routine to “Princess” by Pia Mia with a self-choreographed routine, overcoming her initial hesitation in the process.

“I still think I was nervous while doing it because I was on my own, and I was like ‘Ok, I don’t know if anyone will actually like this,’” Tiana said. “But afterwards a lot of people were like ‘I loved your dance’ or ‘You did so well,’ and I feel like that helped me overcome that mental block a bit, so I guess I’m less scared now.”

To close off the show, members of Harker Signature sang an a capella version of “Wannabe” by the Spice Girls, and juniors Nick Delfino, Eileen Ma and Anja Ree and Irene Yuan (12) danced to “exile” by Taylor Swift and Bon Iver. Lastly, the band “Stud Muffins,” featured Ayan Nath (12) singing “Viva La Vida” by Coldplay along with seniors Shrey Khater, Bobby Wang, Austin Wang, Mark Hu and Brandon Park accompanying him on the piano, cello, violin and drum.

After all the performers came on stage one last time and took a bow, members of ASB ended the show by reciting a poem dedicated to Head of Upper School Butch Keller, who will retire after this year.

“While we’ll miss you every day, your legacy is here to stay. From all of Harker Campus here, we hope you’ve had an awesome year,” student council members said.

A school-wide event, Hoscars showcases the talents of members of the Harker community for audiences to appreciate and commend.

“I felt like everybody was so supportive, and when we were dancing, they started clapping and it felt like a really nice vibe as a community coming together,” Kashish said. “I think that’s what Hoscars is really about — the celebration of everyone’s talents.”