Reactions to the 2022 Grammys awards 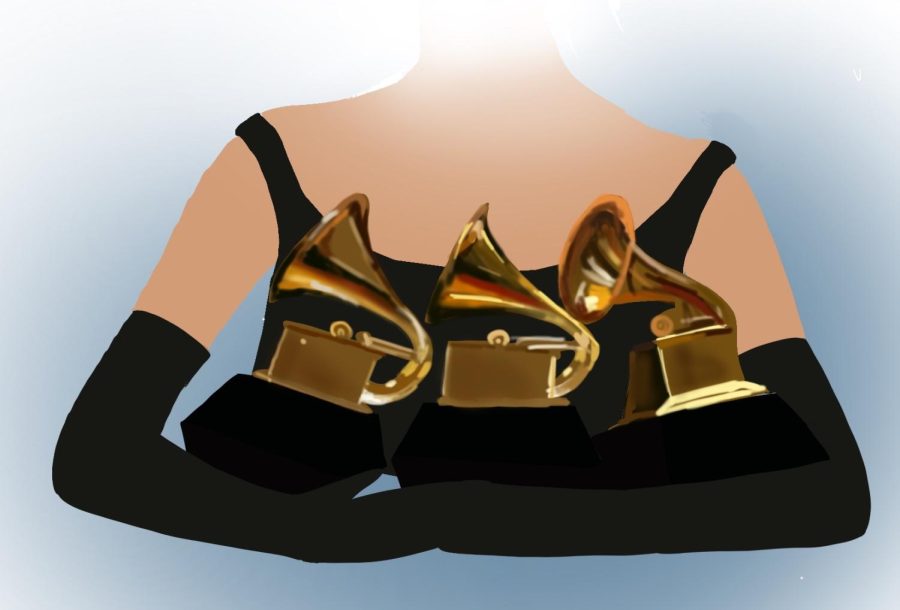 This was the 64th annual awards after nominees were revealed last November, and featured 20 performances and awards in 86 categories.

Alright, first, let’s start with the biggest award, Album of the Year. This one went to Jon Batiste, for “We Are,” and originally Jon Batiste had the most nominations going into the weekend. But we didn’t expect him to win Album of the Year. Lots of people online and other critics also did not expect him to win. And because “We Are” is an R&B album and not pop, which is traditionally what has won Album of the Year in previous years. For example, “folklore” last year by Taylor Swift was an indie pop album, and “When We All Fall Asleep, Where Do We Go?” by Billie Eilish two years ago is also a pop album.

Lots of people as well were surprised by the win and posted about their reactions on social media about how they thought maybe other albums deserved it.

Yeah, I was also surprised because I’d only heard “Freedom” before his win, and I was expecting maybe “Planet Her” by Doja Cat to win because its numbers of streams and the album sales are off the charts.

It was also very, very popular on TikTok. Lots of creators were using songs from the album in dances and other sounds, so we thought that it was very popular there as well. However, this might have skewed our perception because it might be more popular there than in other places.

Yeah, definitely. And other contenders for Album of the Year were “SOUR” by Olivia Rodrigo, which also broke numerous Spotify records, and was really popular with the younger audiences also on TikTok. We were maybe expecting an Olivia sweep for the top four categories of the awards like Billie did in 2020, but this didn’t happen.

Yep, now let’s move on to Song of the Year, which we’re actually going to combine with Record of the Year, because they both went to “Leave The Door Open” by Silk Sonic, which is an American R&B super duo comprising of Bruno Mars and Anderson .Pack.

So “Leave The Door Open” won for both of these categories, which is pretty surprising because it won two out of the four prestigious General Field categories. But we do know that the Grammys have favored Bruno Mars in past years as well, and he has a long history with the Academy’s, and the song was very popular overall. It hit number one and the Billboard Hot 100 and was certified two times platinum earlier this year, and last year had won at the AMAs and the iHeartRadio Music Awards, so generally it wasn’t a super surprising result.

Overall, I thought that there was really great songwriting and composition and production overall. The vocals are on point, as is always with Bruno Mars, and it was critically acclaimed all around by music critics.

Yeah, and other contenders for this category were “Kiss Me More,” “Peaches” and “Montero.”

She also broke the record for most songs in the top 10 of the Billboard charts at one time by a woman. She also had a record breaking first week across streaming services like Spotify and Amazon Music and more.

And she was actually a new artist this year, unlike some of the others who are nominated for in this category, like FINNEAS who had been producing songs with his sister Billie Eilish for years in the past, and Glass Animals, who are their first debut EP in 2012. So, well, Olivia was actually a new artist. And she had won Female Artist of the Year at the iHeartRadio Music Awards and New Artist of the Year at the American Music Awards, so we didn’t think this was a surprising result.

Yeah, and as mentioned earlier, some had been predicting an Olivia sweep like Billie, but this did not happen. Maybe people had too high expectations after seeing Billie sweep two years ago, but this likely won’t be repeated anytime soon.

Yep, and some of the other contenders in this category were FINNEAS and Baby Keem. Baby Keem especially had a very popular rap album this year, which we’ll get into soon. And yeah, so in addition to this award, Olivia also won Best Pop Vocal Album for “SOUR” and Best Pop Solo Performance for “drivers license.”

Moving on to Best Rap Album. This went to Tyler, the Creator for his album, “Call Me If You Get Lost,” and for this category, we didn’t think there was a definite winner or prediction. But Kanye West’s “Donda” was definitely a strong contender, and Nas’s “King’s Disease II.” But Tyler, the Creator was receiving lots of support across social media, and his unique lyricism and different vibe was probably what caused him to win.

Also, Kanye West was banned from performing at the Grammys in March, because of his behavior on social media recently, that the Academy found concerning. So overall, there was a lot going on for this category. But we’re both pretty glad that it went to Tyler, the Creator. We think that he’s kind of a rising new talent and are excited to see what new works he will have.

Yeah, and for Best Musical Theater Album, this went to “The Unofficial Bridgerton Musical” by two musical theater newcomers, which are 20-year-old Emily Bear and 23-year-old Abigail Barlow, and this was definitely unexpected and surprising for everyone, because the two won against veterans like Andrew Lloyd Webber and Stephen Schwartz.

Yeah, but we are definitely going to be checking out “The Unofficial Bridgerton Musical.”

And that concludes our [reactions.] So obviously you are free to disagree with any of these, but those were our reactions to six of the categories at the Grammys last weekend, and thank you so much for listening!

Record of the Year: “Leave the Door Open” by Silk Sonic

Album of the Year: “We Are” by Jon Batiste

Best R&B Performance: “Leave the Door Open” by Silk Sonic and “Pick Up Your Feelings” by Jazmine Sullivan (Tie)

Best Traditional R&B Performance: “Fight for You” by H.E.R.

Best Rap Album: “Call Me if You Get Lost” by Tyler, the Creator

Best Gospel Album: “Believe for It” by CeCe Winans

Best Traditional Blues Album: “I Be Trying” by Cedric Burnside

Best Reggae Album: “Beauty in the Silence” by Soja

Best Song Written For Visual Media: “All Eyes On Me [From Inside]” by Bo Burnham (songwriter)