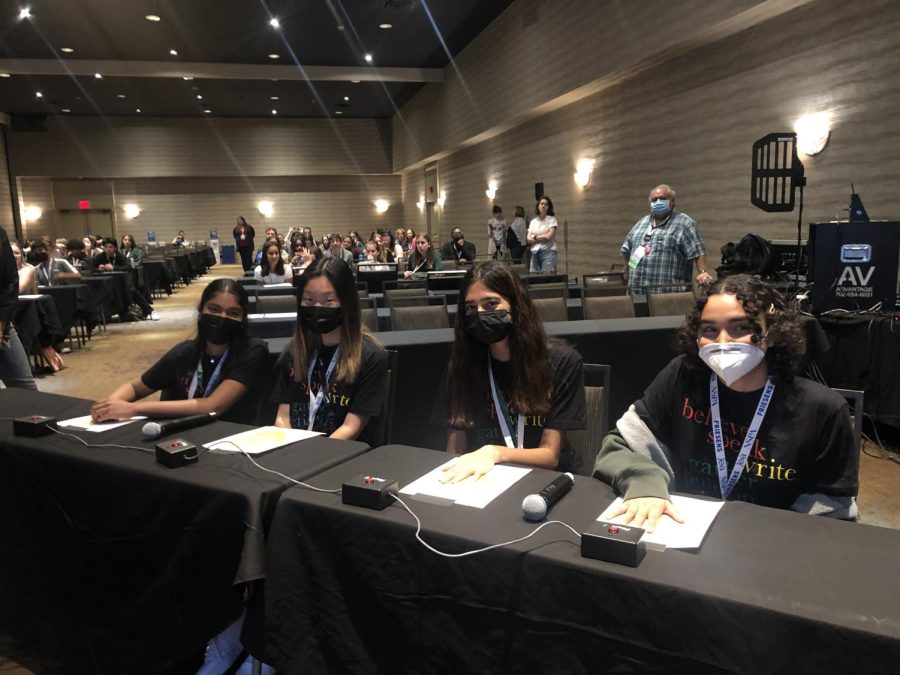 Harker Journalism's Quiz Bowl team competed this morning in the finalists round at 8 a.m. in the Westin Bonaventure Hotel in Los Angeles. The team consisted of Shinjan Ghosh (12), Tiffany Chang (11), Lakshmi Mulgund (11) and Lavanya Subramanian (11).

The competition was sponsored by the Journalism Education Association (JEA) as a part of the National High School Journalism Convention in Los Angeles, which was held from Thursday to Saturday. Competing today in the finalists’ bracket of 16 schools, Harker, seeded fifteenth, clinched a 5-4 win against the second-seeded school, Dos Pueblos, from Goleta, California. Advancing into the following lightning round, a bracket of eight schools, Harker fell to Castle View in an 8-2 loss.

Quiz Bowl questions covered a wide range of topics, spanning from Associated Press (AP) style and grammar to civics and pop culture. Tiffany answered four out of the five questions that Harker scored, a feat she credits to her experience competing with buzzers in competitions for Junior Classical League (JCL).

“They asked a lot of civics questions, so I think APUSH [AP U.S. History] really helped with the written portion of the exam,” Tiffany said. “I think it was more just fun in the moment because I get really competitive in games.”

This year’s competition was emceed by Katie Merritt, MJE, Director-at-large on the JEA Board of Directors. Each round, Merritt would ask ten questions to two opposing teams, and each team received a point for a correctly answered question. If one team answered incorrectly, the opposing team would have five seconds to respond before the question was tossed out.

“It’s just so great to see kids be with other journalists, not just their own school, and realize that what we’re doing really has a purpose in this world,” Merritt said. “Giving them that opportunity to be recognized in front of a national convention for their role as student journalists definitely supports what we are doing as scholastic journalism educators.”

Whitney Huang, Intro to Journalism teacher and co-adviser to Harker Aquila, led the team throughout both days of the competition. After attending her first national journalism convention this year, Huang hopes to redouble Harker Journalism’s efforts in the Quiz Bowl competition next year with more preparation and multiple teams in order to garner a higher placing. For Huang, watching the team compete felt “exhilarating.”

“I was surprised by how many teams were there,” Huang said. “I found that the second round against Castle View [High School] particularly difficult. Next year, I’m looking forward to [the competition].”