Humans of Harker: Sports and speculations 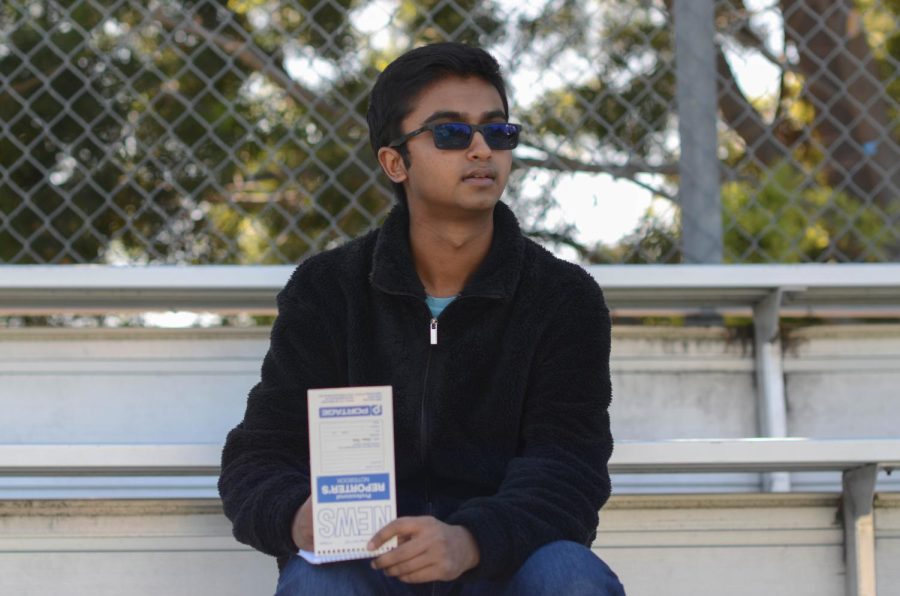 As a child, Saurav recognized his attraction to analyzing and reporting on sports through watching sports talk shows, such as First Take with hosts Steven A. Smith and Max Kellerman, and sports channels, such as ESPN and CBS, and through interacting with larger sports events in the U.S. like the Super Bowl that he sees as an integral part of American culture.

In his journalistic work, Saurav strives to bring a different perspective to the table, one that reflects how he views sports. He channels his interest in sports like football, basketball and soccer into the sports columns he composes and the podcasts he hosts for Harker’s student news site, Harker Aquila.

“A lot of times on TV they have the big highlights, [but] they don’t present a different opinion necessarily,” Saurav said. “But in sports journalism, a lot of the different opinions get portrayed that we don’t see … You watch [a] game, then after that you can watch an analysis, and for me, it was always interesting to do that analysis myself to a certain degree. I try my best to explain why this happened or how the future could look like for this team.”

Saurav not only enjoys reporting about sports but also finds enjoyment in interacting with them and balancing them with his academics. He recalls how, as a child, his mom used to play tennis with him and always encouraged him to focus on physical activity along with educational responsibilities. Even now, sports serve as a way to wind down from doing schoolwork for Saurav.

“[Sports has] been a fun way to relax,” Saurav said. “I couldn’t imagine going to class without doing some physical activity because it’s … eight hours in the school day, and I feel like for me personally, it would be hard.”

Playing basketball in the auxiliary gym with friends remains one of Saurav’s favorite ways to get some movement and activity in during the school day. Close friend Aidan Lincke (12), who has known Saurav since third grade, admires how he encourages his friends to stay active and relax throughout the school day.

“[Saurav’s] interest in sports is helpful to everyone around him because we all start playing too, and it helps us all de-stress and have fun,” Aidan said. “He’s really funny, just plain and simple when he’s in a group with a couple of us.”

More recently, Saurav has slowly moved away from playing competitive sports, which he describes as a difficult but necessary process, in order to allow him to focus on sports journalism, along with other academic interests like computer science and history.

“You always see things in the real world, like you’re building airplanes and cars, that’s physical, but this is something that you don’t see,” Saurav said, describing his views on computer science. “When you’re inexperienced in software or when you’ve never really seen it, you don’t know that you can do so many different things, but once you start coding and it works and it’s not basic stuff, then you finally start realizing there’s a lot of potential behind this and where this can go.”

“[Saurav has] got a chill demeanor about him [and] a fun loving energy,” Irvine said. “He [has] some social intelligence that would come out more dramatically in that group setting.”

Friend Charles Ding (12) also recognizes Saurav’s social receptiveness through the time they spend together and sees it as a distinctive, valuable trait to his personality.

“[Saurav is] not afraid about how he presents himself,” Charles said. “The confidence to do that is very unique to Saurav as an individual. He always has the confidence to speak and say a lot of things.”

As he progresses through the rest of his senior year and into the start of college, Saurav hopes to continue spreading his perspectives and opinions on the sports world, showcasing how relevant sports is today. Perhaps he’ll play some basketball and write some code along the way.

“As a journalist, it’s important to report on every aspect of sports because it’s just as important as a news story, and a lot of the times the two are linked together,” Saurav said. “There’s also a journalistic integrity and moral standpoint too, and that was something I realized after I got into sports journalism … A lot of people idolize those athletes, so it’s important to report honestly and fully about what’s going on in the sports world at any specific moment.”