Humans of Harker: From stunts to support 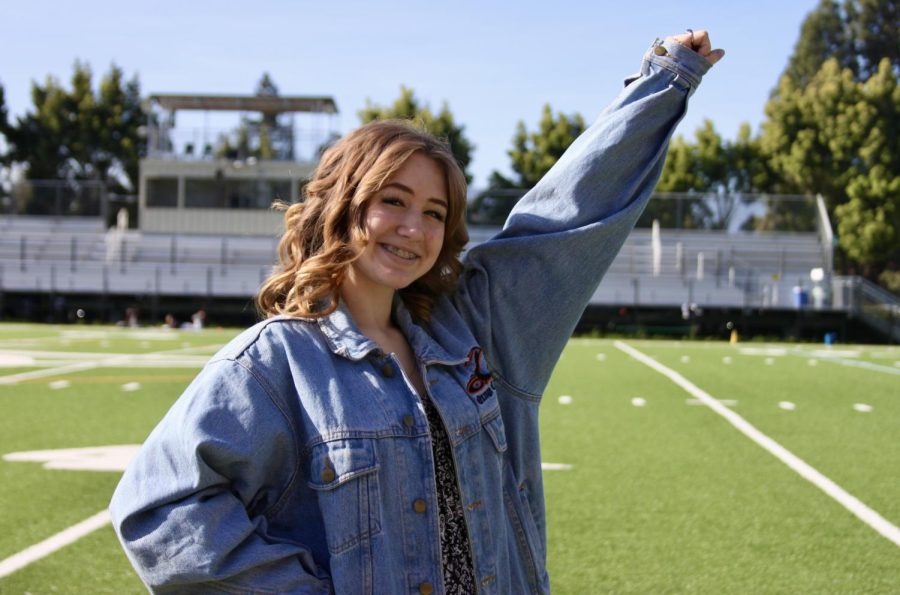 “[The cheer team] is great; they’re like my children. I like teaching them. It’s like a little family even though we’re all in different grades, we still all get along, get along with everyone no matter what. It’s a very cool environment to be in," Imogene Leneham (12) said.

As her teammates go over routines during cheerleading practice, Imogene Leneham (12) enthusiastically guides them through on the Davis Field, performing dance routines, jumps and stunts and offering constructive criticism and help where it is needed.

From when she was in elementary school to now as a senior, Imogene has always participated in cheerleading, the spirited sport that matches her energetic personality. Now, as cheer captain and a swim coach on the side, Imogene uses her bright, caring and adaptable personality to guide others.

“My [first] impression of her was that she was very enthusiastic, outgoing and likable … and that impression stayed for me,” Yasmin Eminovic-Miceli (9), a fellow cheerleader, said. “Even now, I see that coming through. And she has a very unique and unmatchable energy.”

Imogene started cheerleading at the age of 8, participating in competitive cheer which offered the crucial experience needed to play her current leading role as cheer captain. Thanks to the years she had already spent in the sport, Imogene quickly became co-captain of the team as a sophomore.

“I’ve always wanted to do [cheer] in high school,” Imogene said. “That was a big goal of mine, like, ‘Oh yeah, I’m going to do cheer.’ It’s an athletic aspect and a performing aspect.”

Yet, her motivation to participate in the sport of her dream was challenged time and time again. The first time it dropped was because of stress from school, but after reflecting on all the love and support the team had given her, she overcame this hurdle.

“I was discouraged when I did other things about school, because I wanted to get out of Harker, but I wanted to do cheer, but that’s now how it works,” Imogene said. “I realized how much I’d rather be here doing cheer than [going to] a different school. I’ve gotten this far with the team, I’d rather stay in an area that I’m more comfortable with.”

Then rolled in the pandemic, which pushed all sports online, causing cheerleading to be held over Zoom. With the collapse of all sports, Imogene’s hopes for doing cheer in high school were nearly crushed.

With the new school year, Imogene’s dream made a comeback and she became the cheer captain for the Harker team, only to face a new and thankfully non-lethal setback: the lack of experience of new cheerleaders. However, her many years as a competitive cheerleader give her the crucial knowledge to help the beginners grow into more confident cheerleaders.

“Some [stunts] are very challenging and complicated, especially because we have a lot of new girls this year, and that’s their first time stunting at all,” Imogene said. “[My experience] definitely helped a lot.”

Stunts are one of Imogene’s favorite parts about cheerleading, which she considers a more aggressive version of dance that makes her love it all the more.

Close friend Ava Lett (12) thinks that it wasn’t just experience that helped Imogene become such a great teacher to the cheer team, but also Imogene’s spirited personality and dedication that aided her in her commitments.

“Anytime I ever have a problem I’ll always call her,” Ava said. “She’s not only caring, but [good at] problem-solving … She does any problem that you tell her. Whether it’s you or a random person she just met, she wants to help everybody.”

Yasmin thinks that Imogene’s leadership and connections with her teammates is also a major factor in her capabilities as cheer captain.

“Being captain is really difficult because not only is it an in-practice time commitment, but it’s also an outside time commitment,” Yasmin said. “And that’s like choreography and building relationships with all of your teammates on the team, and as far as I know, with every single person on the team, she had built a strong relationship … That is one of the best leadership qualities someone can have.”

All of these leadership qualities compile together to create Imogene’s strong personality, which is picture-perfect for her role as cheer captain.

“The captain role is to be my first person that I go to navigate, help with creating dances for routines, or do communication out to the team members,” upper school cheerleading coach Angelina Metsers said. “A lot of [being captain] was communication, and then also the responsibility of ensuring that we have a good community within the team environment … the area that she’s doing really well in is that she is eager to teach.”

Imogene’s caring attitude for those younger than her is illustrated in the way she regards her fellow teammates as the experienced senior of the cheer family.

“They’re great; they’re like my children,” Imogene said. “I like teaching them. It’s like a little family even though we’re all in different grades, we still all get along, get along with everyone no matter what. It’s a very cool environment to be in.”

Yasmin also emphasizes Imogene’s encouraging and bright personality that helps people through their problems, a strong trait that not only helps her as cheer captain, but makes her a dependable role model for both her cheer teammates and her larger community.

“Actually, I call her my mom,” Yasmin said jokingly. “So I’m her kid, she’s my mom … we were in Sacramento for a game and I … had forgotten a change of clothes and some makeup that we were supposed to have … And she helped me with my makeup.”

Imogene’s maternal love for her juniors also shines through at work, where she coaches children ages 3 to 13 at Ant Swim School in downtown San Jose.

“We’re very keen on getting them moving the entire time,” she said. “They get distracted, and so that gets frustrating at times.”

From coaching to choreographing cheer routines and helping her teammates, Imogene displays an array of positive values that stem from her energetic personality.

“Imogene has been a joy to have on the team in the fact that she’s wanting to stick through throughout for four years,” Metsers said. “It speaks volumes to her commitment and energy as not only an athlete but as a person that when she puts her mind to something she’s really committed to whatever it is that she puts her mind to.”