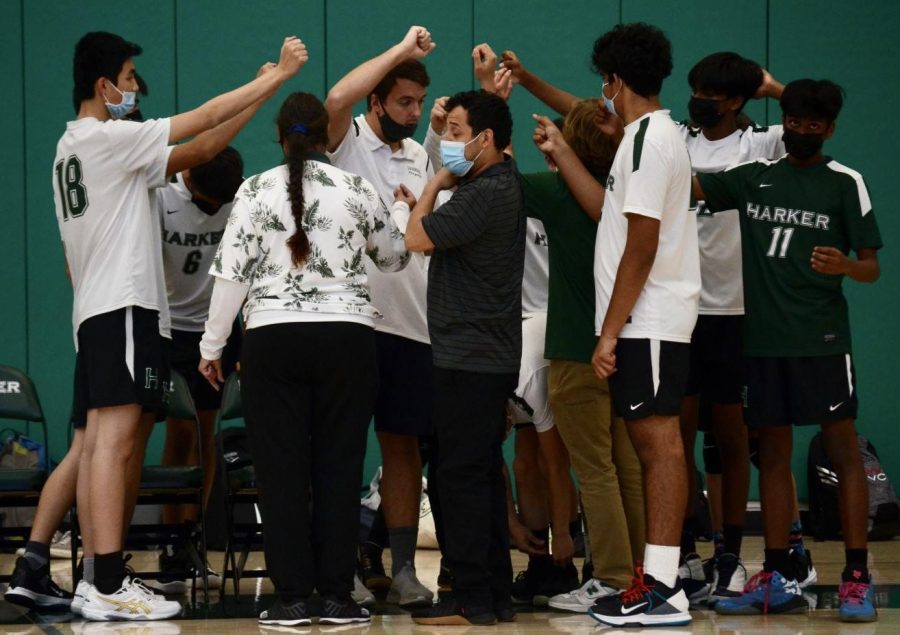 The junior varsity boys volleyball team put their fists in the air for a cheer before the start of their match against Cupertino High School. In their practices leading up to the game, the team focused on communication and blocking.

Before the game, varsity boys volleyball head coach Zac Mattson expressed his hope that the junior varsity team’s focus on communication, team dynamics and blocking in practice would translate to game scenarios.

“One of our goals in this game is to communicate,” Mattson said. “We’ve been working on our team dynamics and our blocking, so I’m excited to see how the game plays out.”

The Eagles started off strong in the first set with a 9-3 lead. Cupertino gained some momentum after a series of unforced errors by Harker, but the Eagles soon regained control of the ball after a dump by setter Jack Shen (10). The teams exchanged points back and forth, but the Pioneers ultimately prevailed, ending the set with a three-point lead.

Harker quickly regained their footing in the start of the second match, but the Pioneers caught up and tied up the score. The Eagles called two timeouts, one halfway through the set and the other when the score was 19-23. But Cupertino managed to score two more points, securing the victory. Outside hitter Rahul Yalla (9) reflects on the team’s weaknesses, as well as some goals he has for their next match.

“I feel like our [passing] was a little weak this time, and in volleyball, every point is a result of the entire team, so even a small mistake can cost us,” Rahul said. “In practice, we’ll work on communication and blocking, and for our next game, I want to work on my timing for my spikes and my mechanics.”

Despite the team’s loss, outside hitter and libero Jordan Labio (10) remained positive since the team remained competitive against a tough opponent and only lost by a few points.

“I think we played really well. Going into this game, we knew that Cupertino was one of the top teams in the league,” Jordan said. “Also, one of our core players was missing, so I’m really proud of the team.”