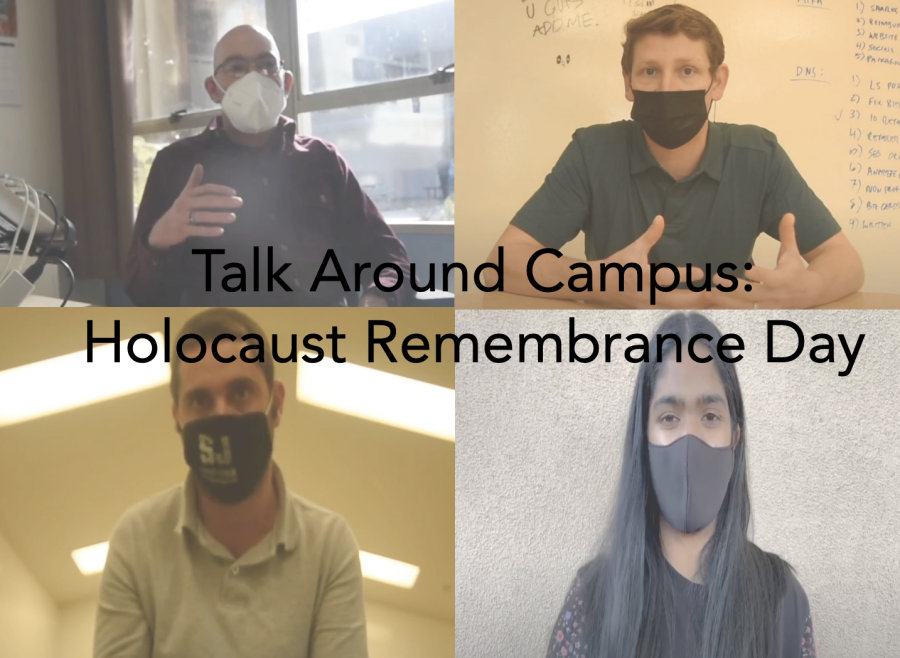 by Sarah Mohammed and Sydney Ling

Holocaust Remembrance Day, called Yom Hashoah in Hebrew, took place this year on April 28, according to the United States Holocaust Memorial Museum. The day commemorates the survivors of the Holocaust, a mass genocide of six million Jewish people by Nazi Germany during World War II. Listen to community members speak about the gravity of the Holocaust and its impact on their lives today.

What is the purpose and meaning of Holocaust Remembrance Day to you as a remembrance day?

“It brings me back to that first realization I had as a young person not only of the atrocities that happened but really kind of turning a new leaf and realizing that we have not only a right but an obligation to protect ourselves,” upper school business teacher Michael Acheatel said.

“I personally am not Jewish, but I think that Holocaust Remembrance Day is extremely important because I think it is really important to support the Jewish community and what they’ve been through,” Uma Iyer (12), president of Student Diversity Committee (SDC), said. “In order to commemorate, I think it’s really important to educate yourself and take an interest in reading about the history. SDC was actually able to bring in a Holocaust survivor to come speak to our community, which further increases education and just awareness.”

How does the Literature of the Holocaust course teach students about its historical impact and significance in a meaningful and sensitive way?

“The class is about the impact of the Holocaust and the things that happen on the individual,” upper school Literature of the Holocaust teacher Ohad Paran said. “Each author uses the written word as the medium by which they explore their own understanding of what happened to them and how they’re living with that. They try to find a way to impart to the reader what happens to a person when they experience an event that is so enormously horrific and complex. Over the years, the class has shifted a tiny bit, to using the Holocaust as a vehicle for understanding what can happen to people in any time in any country, within any culture, any belief system—when one group oppresses [or] attempts to destroy another group and what the effects of trauma are on the individual and also multi-generationally.”

How does the legacy of the Holocaust carry on to this day, and does it impact you on a daily basis?

“On the one hand, I’m a cis-gendered, white male,” Achaetel said. “I have a lot of privilege that comes with that. On the other hand, I’m a Jew, a minority, less than 1% of the population. We’ve been persecuted since really the beginning of religion. I, for one, have experienced antisemitism. I haven’t experienced it on the level of some of my ancestors, right, but I carry that burden that my ancestors had.”

“It’s a reminder of what’s possible,” upper school Economics teacher Sam Lepler said. “I think it’s important for us to recognize that the people who perpetrated the Holocaust are regular people, that they are not demons and monsters devoid of humanity. That through the study of the Holocaust, we can come to understand and should remind ourselves on a regular basis that we are susceptible to a lot of the psychological things that could lead to such an event.

How can we commemorate Holocaust Remembrance Day and educate ourselves to combat antisemitism?

“Educating [ourselves] is really important,” Uma said. “There is “Night, Dawn and Day,” which is a book, as well as “Maus,” which is a graphic novel. You can even take the two electives on campus: Literature of the Holocaust with Mr. Paran and History of the Holocaust and Genocide with Ms. Pianko. I think they as individuals are also great resources, our Harker community. I would also say your peers—there’s a large Jewish community here at Harker so I would say talk to them if you’re interested in it. As well as, of course, so many online resources for us.”

“I think the most important thing to do with regard to remembering the Holocaust is to look at it in the wider context of antisemitism, both historic and today,” Lepler said. “I think that the real legacy of the Holocaust is its place in global antisemitism, which is as alive today, as it has ever been. And so I think the biggest mistake we can make, the most important thing we can do is not to place it in history, and to recognize that it is alive. It exists today, and it can happen again.”

“For me, it’s more than just an antisemitism,” Achaetel said. “I appreciate that it is a day that we’re recognizing the history of antisemitism, particularly in Europe, in the 1940s, but we still see immense amounts of hatred for groups of people, via Jews or other groups around the world. And so I hope as we take this day to recognize a particular group of people, we are also using it to look around and see what similar atrocities are happening today. Because the atrocity of the Holocaust isn’t just what happened. It’s also that the rest of the world stood by for a long time as millions of people were murdered before they stepped in. I think one of the lessons that we have to learn there’s not only specifically not allowing this to happen ever again to the Jewish people, but more pointedly looking at ourselves and saying, What are we doing today? What are we doing right now to help people who are being persecuted maybe not in the exact same way but in other similar ways?”