Talk Around Campus: What’s your Wordle? 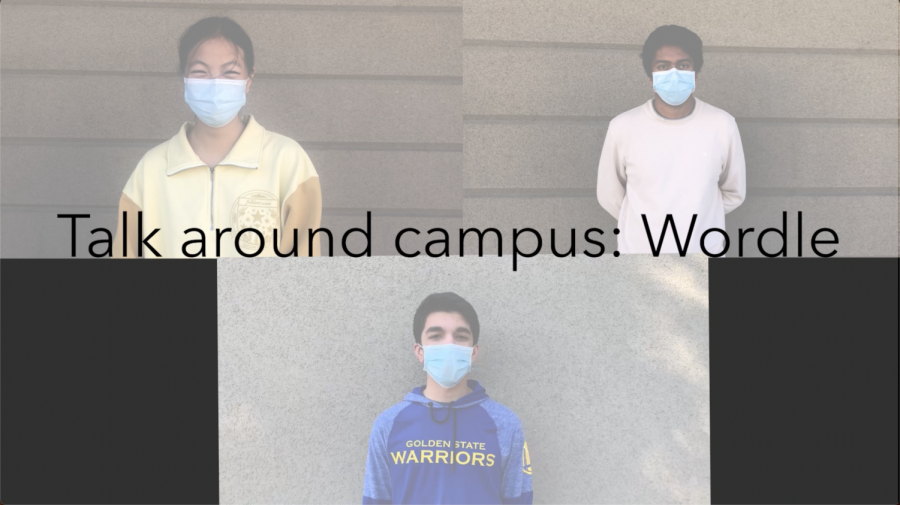 Students discuss their opinions on Wordle, which has grown in popularity over the past few months. Fans try to guess a five-letter word updated daily in under six tries, and solving the puzzle has become an entertaining routine for many.

by Irene Yuan and Arely Sun

In just a few months, what began as a personal project for a software engineer catapulted into popularity, becoming the sensational game with over 300,000 players known as Wordle. Fans try to guess a five-letter word updated daily in under six tries, and solving the puzzle has become an entertaining routine for many. Other creators have introduced Wordle-adjacent guessing games such as Nerdle, where players guess a math equation; Taylordle, which features words from Taylor Swift song lyrics; Semantle, where users attempt to find a word based on semantic proximity of guesses; and Poeltl, which has National Basketball Association (NBA) players as solutions.

Faculty and students alike play these puzzles regularly at school and at home, together and individually. Students share their experiences with Wordle and some unique words they’ve come across since they started playing.

Q: When did you first hear about Wordle and why did you decide to start playing?

Aditya: I heard about Wordle two or so months ago, when it was really starting to get popular. I mostly started playing because a lot of my friends were playing, but it also seemed like an interesting game. And like the fact that it’s a daily thing that you always keep track of your scores.

Ashley: I heard it from Ms. Miller [in] early December. I think it’s fun to interact with your friends about it and compete to see who can do it in the least tries. I think it’s cool that there’s a community around Wordle.

Vardaan: So I first learned about Wordle a month ago or a few weeks ago because my mom said that her friends at work are playing it. So then I downloaded it and it’s pretty addicting. At this point, I’ve just made it a part of my daily schedule. Every day on our history break either I play Wordle or sometimes, during lunch or something, I’ll definitely make sure to do it

Q: What is your Wordle starting word, if you have one?

Ashley: I like to switch it up every day. It keeps it interesting.

Vardaan: I tried a bunch of different ones. I looked on YouTube and someone did data analysis about Wordle and I’ve tried a bunch of words like “adieu.” I use “roate” (R O A T E) because I think it gives me some common vowels, common consonants.

Q: What has been your favorite Wordle word so far?

Aditya: [Well it’s not my favorite but] this is an infamous one almost. A week or so back, there was a word, “vivid,” and that was a pretty difficult one because it has a “v” and that’s one of the most uncommon letters and two of them so that was an interesting one.

Ashley: I really liked “cynic,” I thought it was pretty interesting.

Vardaan: Maybe not favorite but ones that are the most interesting are the ones that are really up to luck, are the words that you have four greens and one gray spot and then it’ll be “watch” or something. Today the word was “watch,” I put “patch,” I put “batch,” all those before I got “watch” so that makes it a little more fun because sometimes it’s up to luck, and, you know if you’re lucky then you’ll get it.

Q: What Wordle derivatives do you like to play?

Aditya: So one Wordle variation I really like is called “Semantle” and it basically is where you have to figure out a word based on how close your word is to the correct word. I really like it because there’s infinite possibilities. In Wordle, there’s only a set number of words and letters you can choose, but in Semantle there’s basically the number of words in the English language to choose from there basically. It’s pretty frustrating sometimes because you could be so close in similarity to the correct word and still not get it, but once you really do get that word, it’s really satisfying.

Ashley: I really like “Taylordle,” which is Wordle, but with Taylor Swift-related words. I made a list of words that could be used for it, so I’ve been going off of that list and it’s working. So far, I’ve gotten four words in one try and eight words in two tries. It’s very exciting.

Vardaan: The one I also play is “Poeltl” (P O E L T L). It’s an NBA version. I guess a player and it will tell you about if you got their height correct, the team they played for, and different stats so then you can guess the player portal. I really only play those two — Wordle and Poeltl — because my friends follow basketball so we do that together.

Q: Do you compare scores?

Aditya: So I [play the game] by myself, individually, but me and my friends, we have this thing where we basically share our Wordles on a spreadsheet and we also share our mood for the day. So from one to six like one is like we’re having a really good day and six is not so good of a day, but it’s a nice way where we can see if there’s any correlation and also just checking to see how each of us is doing.

Q: What’s your Wordle strategy?
Ashley: I try to get as many consonants as I can first. I heard from someone that it’s easier for people to fill in the vowels than consonants. It’s not very helpful to find out what vowels are in the word first.

Vardaan: Funny moments are just when we’re talking about the Wordle word and then you realize somebody in the group hasn’t done it yet and they get mad at you over a word. Just a random five-letter word and now they’re mad at you for the rest of the day. I’ve had moments: every other day on my history break, three of my friends and I will be trying to play Wordle and we’ll be going back and forth and trying to be better than the other.