Humans of Harker: From keys to strings and beyond

Eyes open and hands steady, Tina Zhong embarks on her personal journey as a musician 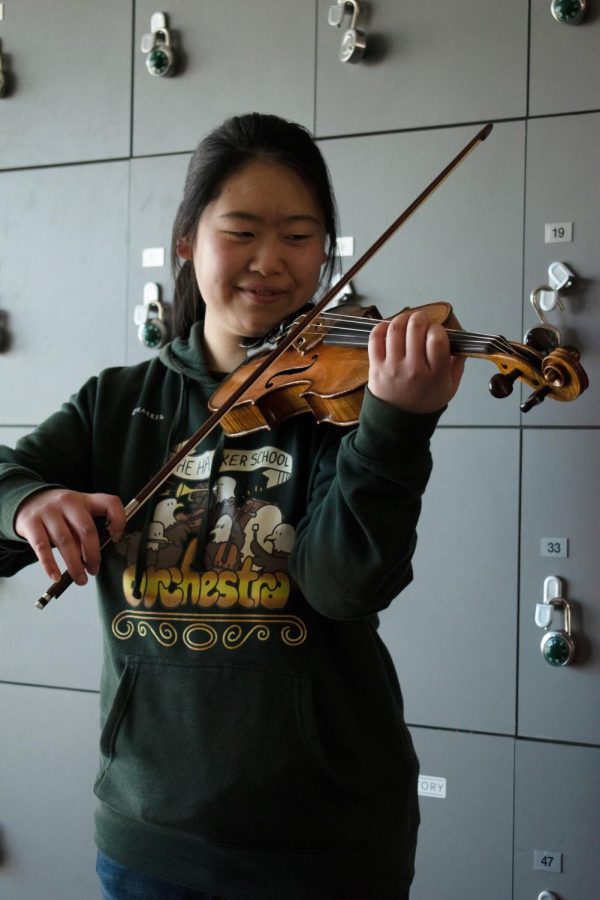 “Music is about sharing with others. It's not about you practicing alone in a practice room; it's about sharing it with others and making sure that other people enjoy it. It's about you, sharing your emotions and your feelings, expressing yourself through your music," Tina Zhong (12) said.

by Claire Zhao, Reporter
harkeraquila · Humans of Harker: From keys to strings and beyond

Tina Zhong (12) recalls the moment her journey as a violinist began. Standing on the deck of a cruise ship at the age of 6, she heard the sweet, shrill strains of a mysterious instrument drifting through the air. Turning around, Tina caught sight of where the sound was coming from: a boy around her age, carefully drawing his bow across the strings of his violin. It was at this moment that an entirely new musical path opened for her, diverging from her original path as a pianist and guiding her into the previously unexplored world of violin.

“For violin, you can play a lot of chamber music with friends, and you can also play in orchestra,” Tina said. “[For me], violin is a way to socialize and meet other people.”

Striving to push her own limits, Tina seeks new experiences and perspectives, setting goals along the way and bringing herself to new heights. Before violin, Tina played the piano, and she still continues to teach weekly piano lessons. She later picked up the cello, which she now practices outside of orchestra for her personal enjoyment.

“I’ve been willing to try new things and go out of my comfort zone … I think that has shaped me,” Tina said. “Even if you aren’t great at it, you should always try something new, because you might never get that experience again.”

Close friend April Zhang (12) first came in contact with Tina during an orchestra minicamp in ninth grade. Throughout her three years of friendship with Tina, she sees Tina’s outstanding resilience and maturity on a day-to-day basis.

“She doesn’t give up easily at all. It applies to school and music, and pretty much everything,” April said. “Even if things don’t really go the way they were supposed to, she’ll always push through, as hard as she can. She challenges herself as much as possible.”

Tina endeavors to push herself musically in various ways. Last year, she was inducted into the California All-State Orchestra. Now, in her last year of high school and her fourth year as a violinist in Harker’s orchestra program, Tina is the co-president of Harker’s Tri-M Music Honor Society.

“It’s like an ongoing challenge, to make sure you spend enough time practicing,” Tina said. “There’s always a bit of competition, especially when you’re trying to audition for orchestras. But … It’s a lot of fun; there aren’t too many challenges. It’s more about enjoying the practice and playing with friends.”

Close friend and fellow orchestra member Karolyn Cheng (12) describes Tina as a hardworking, dedicated and open-minded person, always committing to her own ideals.

“She sets goals for herself. She finds things for herself to do, like different internships and different competitions,” Karolyn said. “She’ll just try things out, and she’ll put in the work to do it.”

Tina’s musical journey taught her to play with confidence and enjoyment. Despite her nervousness before performances, Tina realizes that she just needs to stay in the moment and bring her attention to the music, rather than the crowd.

“[My favorite part of performing is] being able to share with others and putting your emotion into it,” she said. “The audience can feel that too, and that’s very powerful.”

Upper school orchestra conductor Dr. David Hart, who has taught Tina as a part of Harker’s orchestra program since middle school, notes the way Tina expresses herself through music and contributes to the group’s mentality, especially as a lead violinist.

“[Tina] was quiet, very confident, but when she played her violin, I always felt like her voice would come out,” Dr. Hart said. “I notice that the violin seems to be a really important thing in her life … We need lots of great violinists to make an orchestra work, and she is a huge piece of that puzzle.”

Tina finds that despite her introverted personality, violin allows her to build profound emotional connections with everyone she plays with: her own friend group, Tri-M club members and the members of the orchestra.

“[I] use violin as a way to socialize and meet other people … It’s very cool, especially when you play chamber music or orchestral music,” she said. “To be able to hear the different instruments, different tones, you’re able to create something more.”

Through the connections she has made through music, Tina found that she particularly enjoys working with children. She and her friends played some pieces from Star Wars and Frozen at a park, capturing the attention of many children there. Notably, as a fun and special project last summer, Tina also organized a week-long summer camp for little kids. Along with her friend group, she taught campers about classical music.

Tina brings the same energy and kindness she exudes from music into her own social circle. Close friend Esther Wu (12) acknowledges how much Tina has constantly been doing to care for the entire friend group.

“[Tina] really values having these deeper connections with people,” Esther said. “She’s really proactive in organizing things, always trying to get us together, especially during the pandemic. She would organize hikes, and some of us would go hiking together.”

Now, as Tina continues to embark on hiking trips to bond with her family and friends, she tries to hike every weekend, incorporating the activity as a significant part of her personal schedule.

“Through [hiking], you realize … to get all the way to the top, it’s a lot of effort and it might take a few hours, but … you’re willing to go up there just to see the view [and] enjoy the experience climbing,” she said.

In the end, Tina credits her determination and her love for sharing positivity with others as what makes her a passionate hiker, a considerate friend, a hardworking student and finally a powerful musician.

“Music is about sharing with others,” she said. “It’s not about you practicing alone in a practice room; it’s about sharing it with others and making sure that other people enjoy it. It’s about you, sharing your emotions and your feelings, expressing yourself through your music.”